November arrived, and with it lots of rain!

It was strange with some racecourses getting lots and some hardly any at all, but we now have some proper winter ground and we can enjoy lots of runners.

This has also given us the opportunity to work and school the horses on the grass here at Jackdaws Castle.

We had some very pleasing winners and many who ran very well. It was lovely to see Annie Mc back on a racecourse after a year or so off and she ran nicely up at Carlisle. With that said, you will always get ones that frustrate you a little and not run as well as you want them to but that's the nature of the game!

We were devastated to lose Garry Clermont at Ascot. He was such a talented horse and was  loved by everyone in the yard. It never gets any easier and all of our thoughts are with his owners Mary and Kate.

We had a hugely productive evening at the Tingle Creek Sale in Sandown last weekend. We bought 4 lovely horses, including the star of the sale  Brook Bay. We wish Martin and Iwona all the luck and success with him!

Mullys Choice, one of the exciting lots we bought is for sale. You can find all the information below!

We will be at Cheltenham for the Tattersalls December Sale again this Friday looking for more stable stars. We have shared details of the sale below and if you are interested in any of the lots, please let us know and we would love for you to join us.
​
We will no doubt be back in touch before Christmas, but in the meantime, we hope you enjoy all the fantastic racing that December has to offer!

Thank for all of your wonderful, continued support.

Itso Fury followed up his win at Warwick with an impressive victory at Ludlow in the hands of Jonjo Jr.

He was always prominent and was shaken up after 3 out. He joined the leaders at 2 out and pushed on to win comfortably. 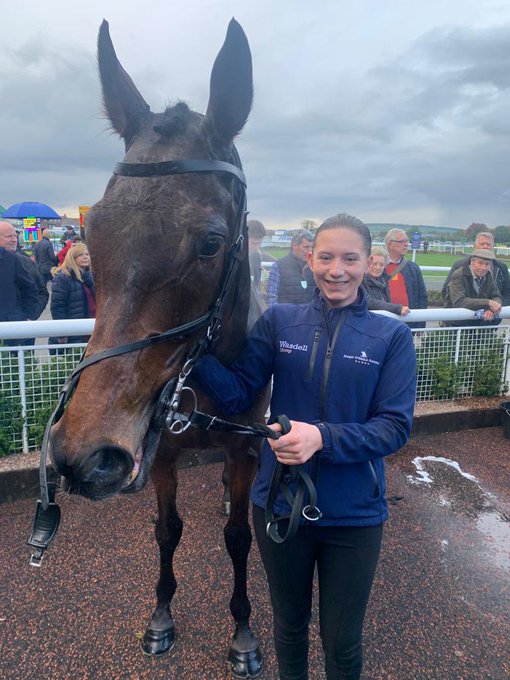 Itso Fury and Dayna in the winner's enclosure at Ludlow

Blue Shark gets up to win at Ffos Las
NOVEMBER 6

Blue Shark got up to win in thrilling style at Ffos Las in the hands of Jamie Brace.

In midfield for much of the race, the pair looked out of contention before making steady headway after 3 out. The race still seemed to be out of reach when approaching the last but he managed to get his head in front as they crossed the line.

​We are delighted for Ros, Zakia, Sam, Sue, Paul and Tony of The Ocean Partnership. Huge congratulations! 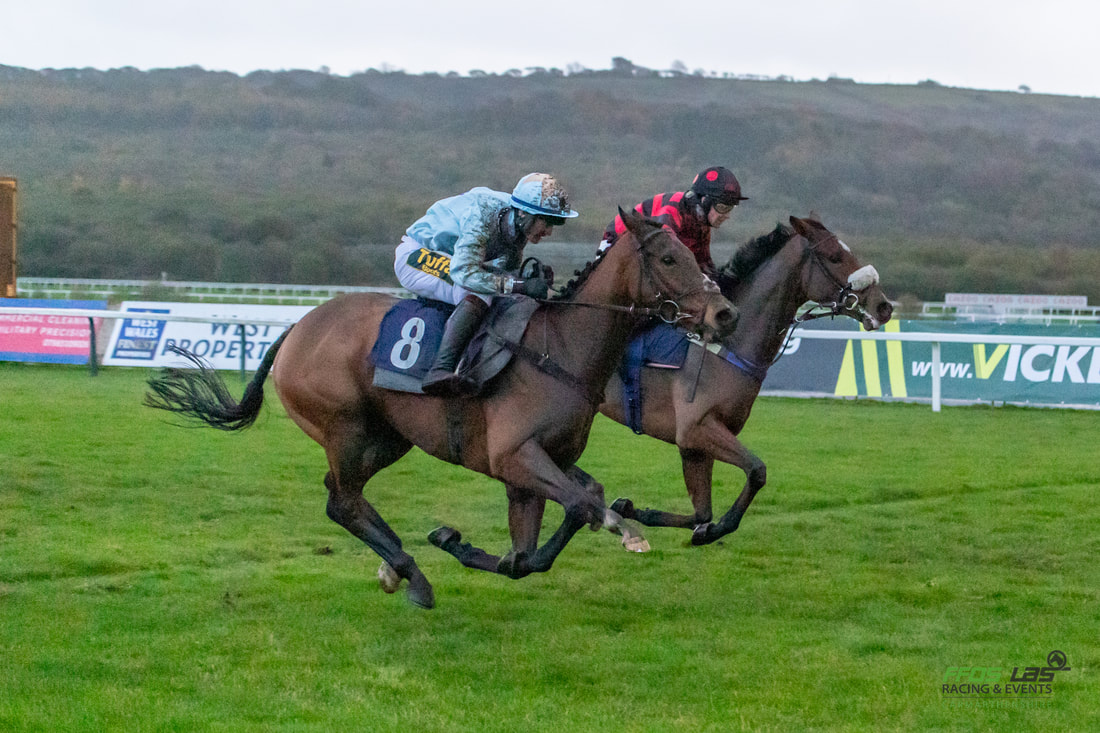 Magic Seven put in an impressive display in the bumper at Hereford in the hands of Jonjo Jr.

After sitting in midfield, they made headway 6 furlongs out and soon went into the lead. They went clear in the last furlong and stayed on strongly. 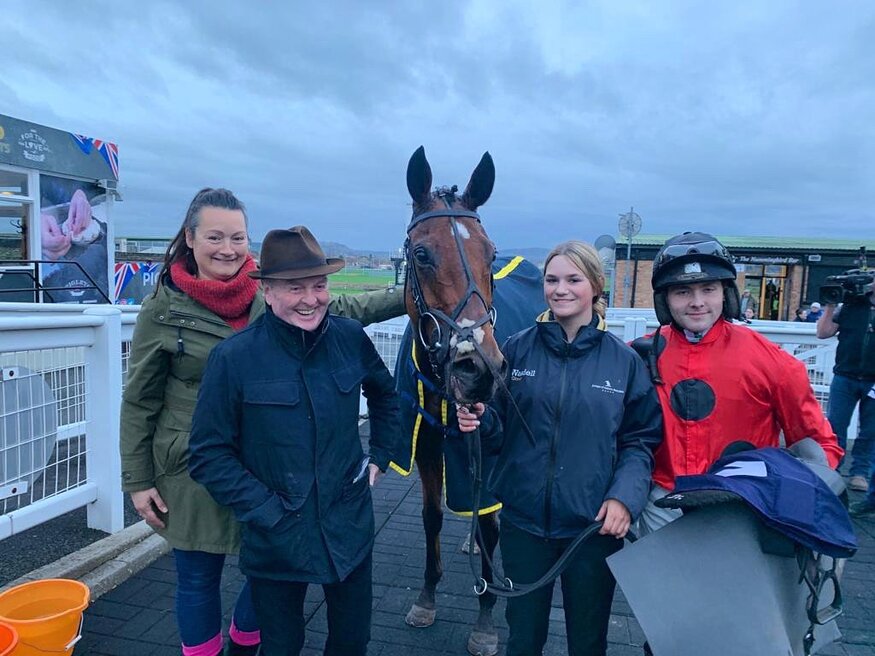 Magic Seven with KT Walker, Jonjo, Isabelle and Jonjo after winning at Hereford.

Walk Of No Shame times it right at Warwick
NOVEMBER 16

Walk Of No Shame and Jonjo Jr. timed it perfectly to get up to win the Mares' Bumper at Warwick.

Always in touch with the leaders, she was pushed along around home turn and eventually made her move inside the final furlong, keeping on well on the outside to win by 2¼ lengths. 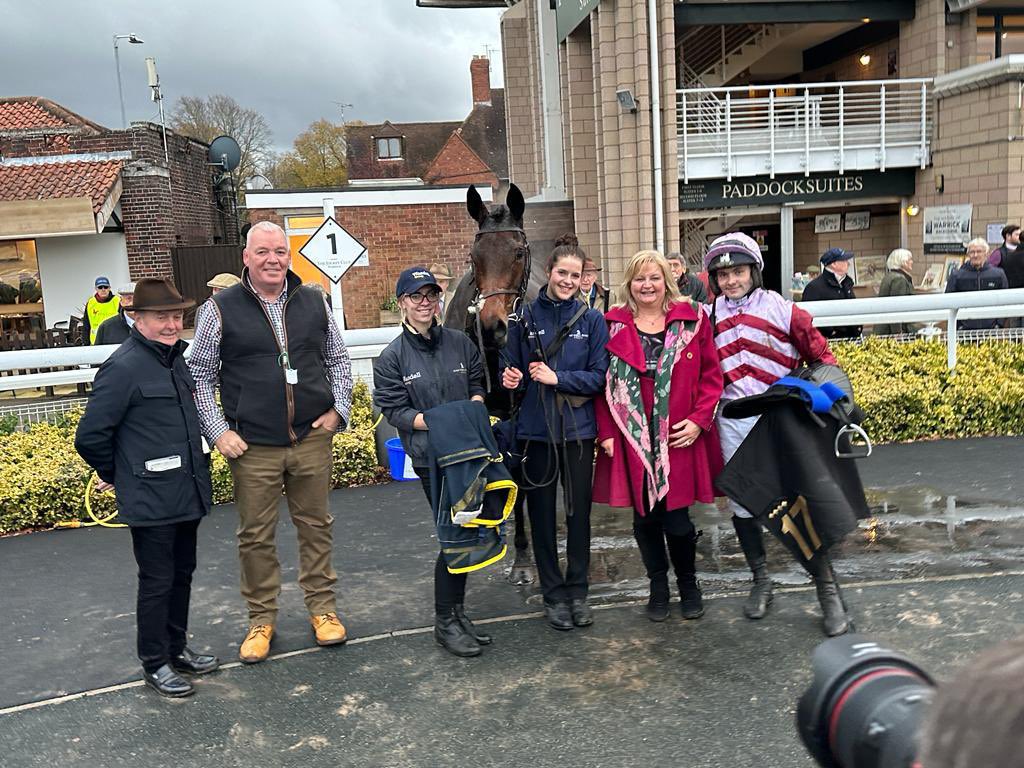 Walk Of No Shame with Jonjo, Nigel, Alex, Leah, Sharon and Jonjo posing for the winner's photo at Warwick

Walk In My Shoes wins at Bangor-on-Dee
NOVEMBER 26

​Walk In My Shoes opened up her account with a pleasing display at Bangor in the hands of Jamie Brace.

The pair disputed the lead for much of the race and was always going best throughout. She was pushed along 2 out and looked in control when popping the last and keeping on well in the run in.

We are absolutely thrilled for Hillary, Scarlet and Harry. Huge congratulations!

Walk In My Shoes and Jamie crossing the line to win at Bangor.

Morning Spirit turns it on at Carlisle
NOVEMBER 27

Morning Spirit won in impressive fashion at Carlisle under a superb ride by Jonjo Jr.

He was always prominent and disputed the lead throughout the second half of the race. Some good jumping saw him lead 2 out and rallied after the last, winning going away.

Morning Spirit and Jonjo Jr. jumping their way to victory at Carlisle

Lock's Corner and Jonjo Jr. stayed on strongly to win at a very foggy Catterick.

Sat in midfield, they made steady headway and was ridden after 2 out. They jumped the last hurdle in second place but finished stronger and went clear in the final 110 yards to win well. 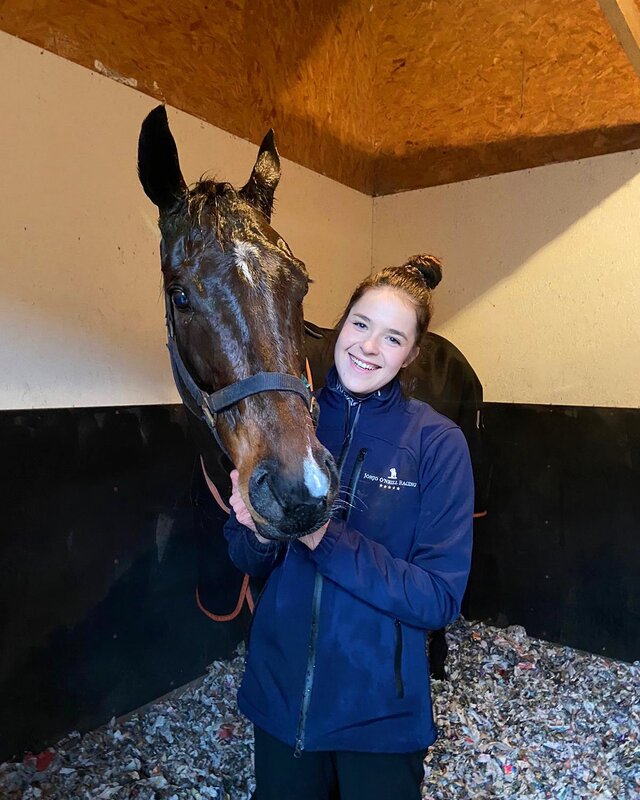 Lock's Corner and Leah all smiles after winning at Catterick

We reached a lovely milestone at Southwell as Red Dirt Road and Jonjo Jr. brought up our 100th winner at the course.

For what turned into a two-horse race quite early on, he jumped his hurdles nicely and was hard pressed from 2-out. He took a narrow lead into the last and jumped it well and kept on all the way to line to secure a 1½ length victory.

​We are thrilled for Danny, Heather, Mike and Lin, huge congratulations! 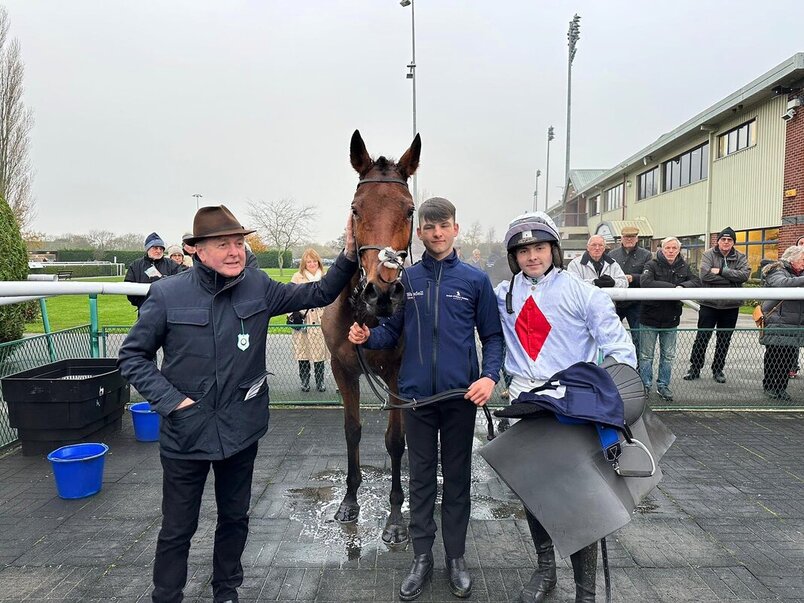 Red Dirt Road with Jonjo, Cain and Jonj in the winner's enclosure at Southwell

After two seconds in her previous two runs, Dollar Bae got off the mark this season in impressive fashion in the hands of Jonjo Jr.

She was kept towards the rear and continued to make good headway throughout, before leading 2 out. They went clear approaching the last and ran on very well in the run in.

We are delighted for Lisa and Paul, Max and Angela, Eric and Gillian and John of The Perfect Partnership. 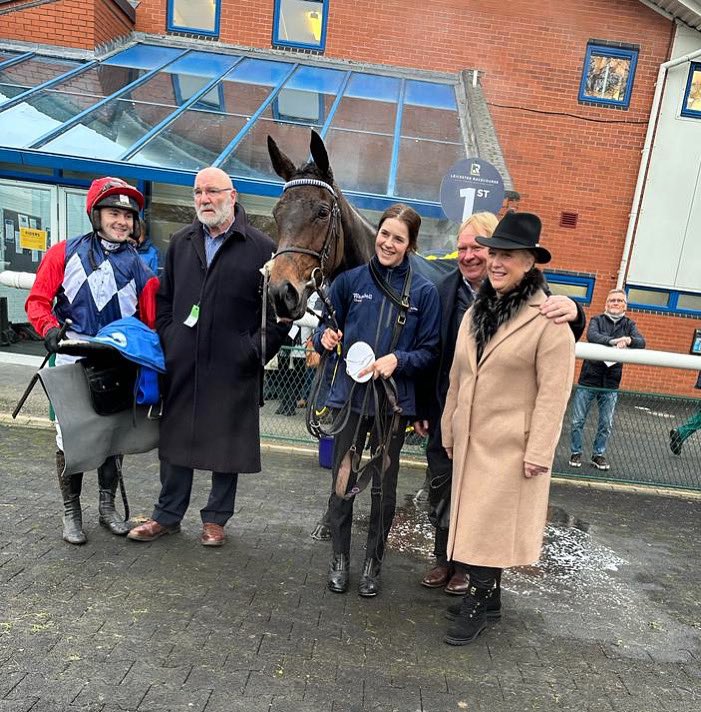 Dollar Bae with Jonj, Eric, John and Gillian at Leicester

Mullys Choice is a staying chaser of the future. He did well to finish a staying-on second in his debut Irish 4yo Point-to-Point on a tight track behind the well-regarded winner Southoftheborder who sold for £145,000. He is a typical son of Flemensfirth who will improve with time and distance, and he comes from the family of Jonjo’s smart Cheltenham Festival placed performer Isn’t That Lucky.

​We will be heading to the Tattersalls Cheltenham December Sale at The International Meeting with quite a few of the lots catching our eye.

​If you are interested, please contact us at pa@jonjooneillracing.com and we would love for you to join us at the sales.

​You can view the lots of the sale via the button below.
VIEW LOTS

Many congratulations to Aaron McLoughlin Sutherland who has been awarded our Employee of the Month for November.

Aaron rides out every day before heading back into the office to plan races for our horses with Jonjo Snr and Jr.

What is you favourite thing about working at Jonjo O'Neill Racing?
Getting to work closely with lads who have ridden/trained Grade 1 winners including Cheltenham Festival winners day in day out is class. The wealth of knowledge they have amongst them is next to none and of course having a bit of craic along the way.

How did you get into racing?
Leopardstown Racecourse was my local track back in Ireland. I started working in the golf shop (at the racecourse) at weekends when I was school which lead me to working race days. It just snowballed from there really.

What is you best moment in racing so far?
Being able to ride the horses at home and then watch them at the racecourse. How many people that work for an F1 team actually get to drive the team’s car. That’s what’s special about the game we are in.

Ambitions in racing
To have as many winners as possible! 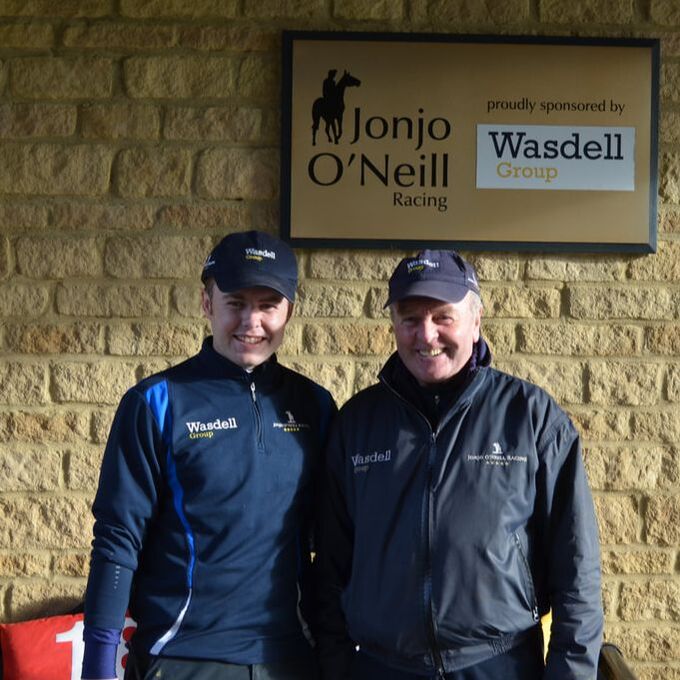 ​A BLAST FROM THE PAST!

There are lots of wonderful accounts on Twitter that share old footage of racing and also old interviews!

This wonderful 9-minute interview with Jonjo and Julian Wilson is from BBC Grandstand in 1981.

They watched All The Glory, Polly (Valirann x Name For Fame) and their new colt on the gallops before enjoying a tour of the yard, swimming pool and enjoying some hospitality in the owner's suite.

The Top Speed Syndicates are brilliant value for money and are a great way to enter racehorse ownership.

These would make fantastic gifts for any racing enthusiasts and give people wonderful days out at yards and at the races.

If you are interested in purchasing shares in any of their horses with us, click on the buttons below.
BUY SHARES IN POLLY
BUY SHARES IN ALL THE GLORY 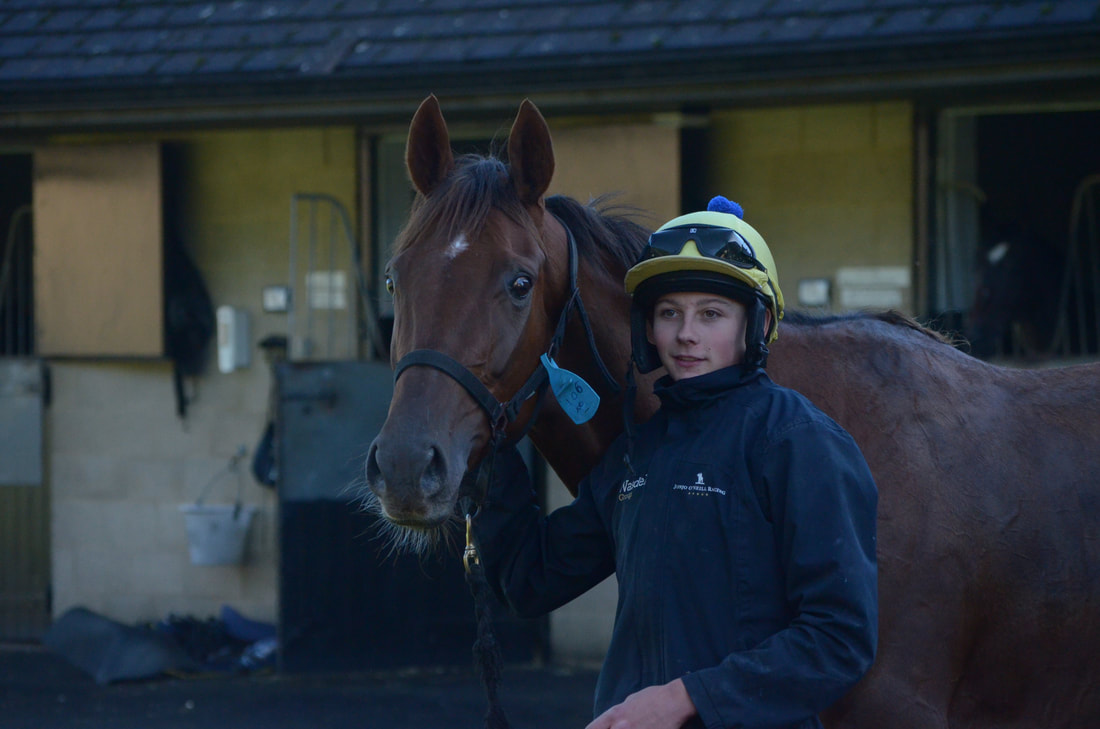 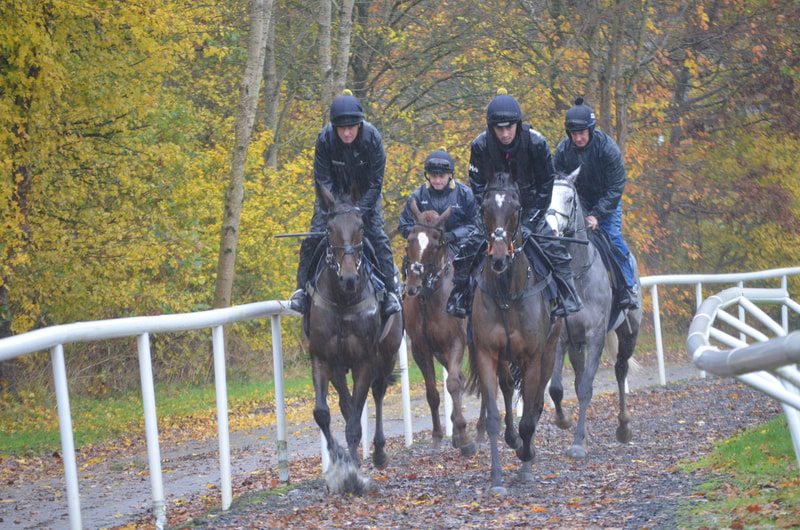 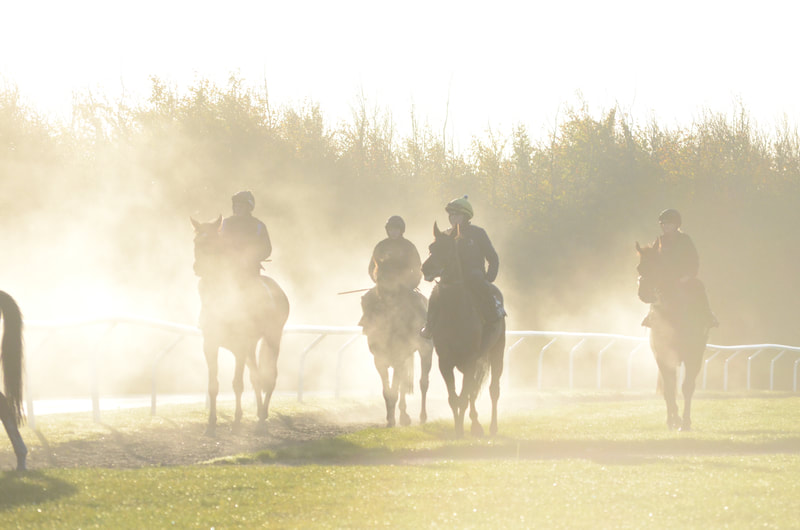 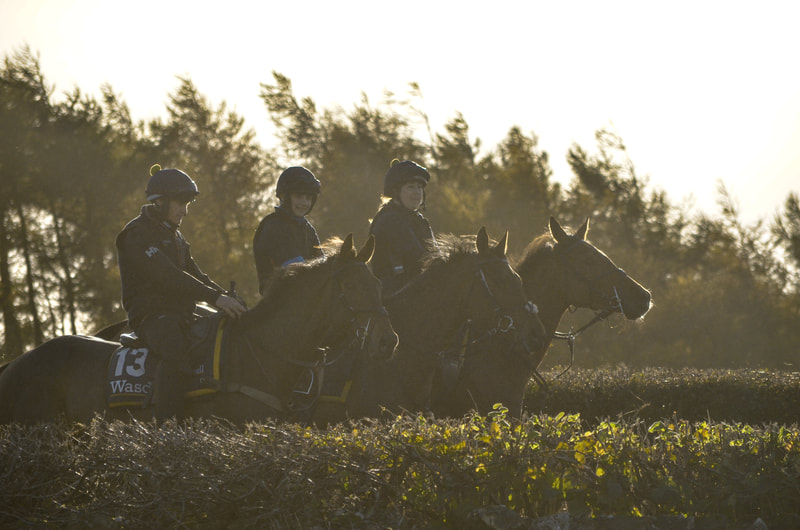 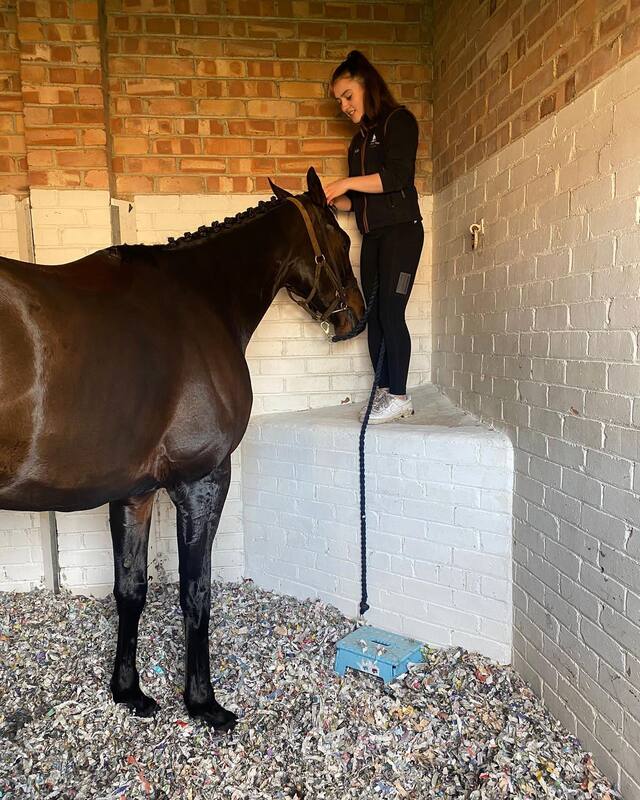 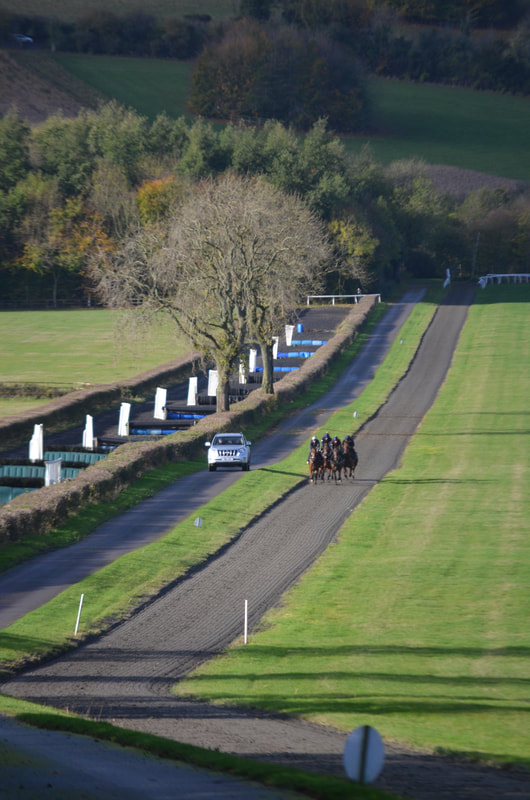 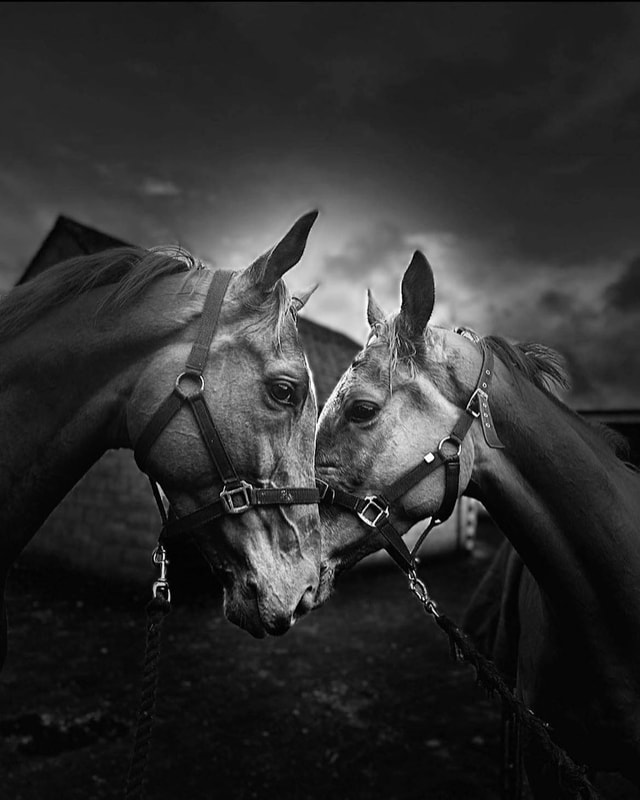 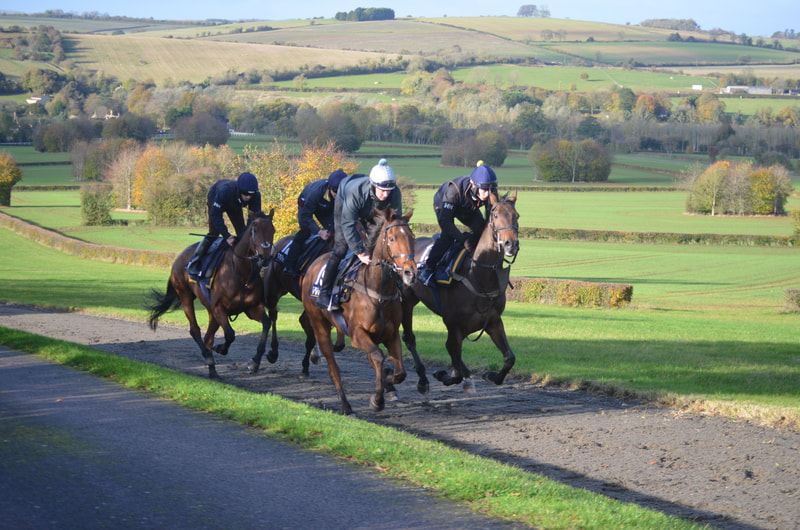 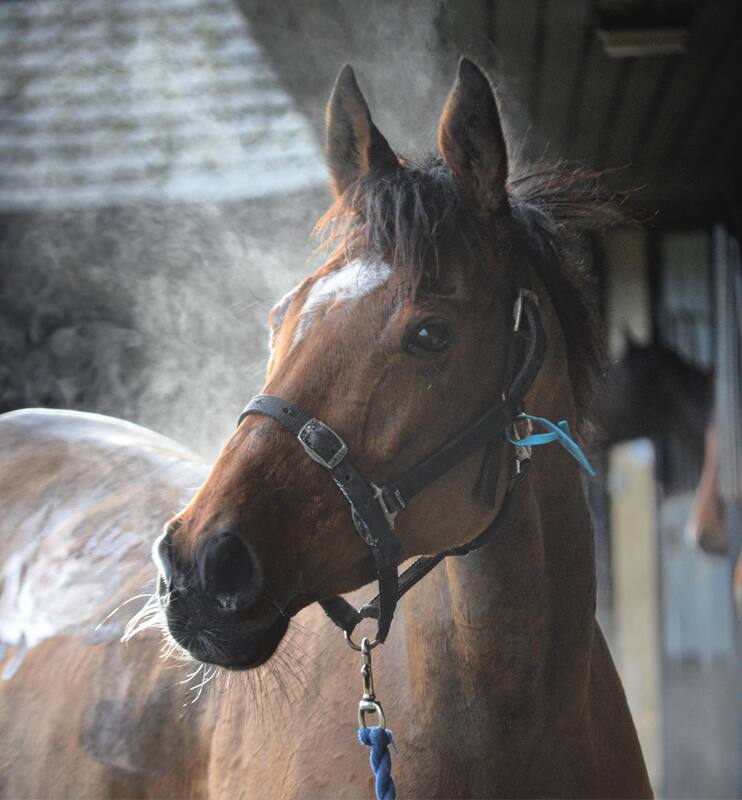 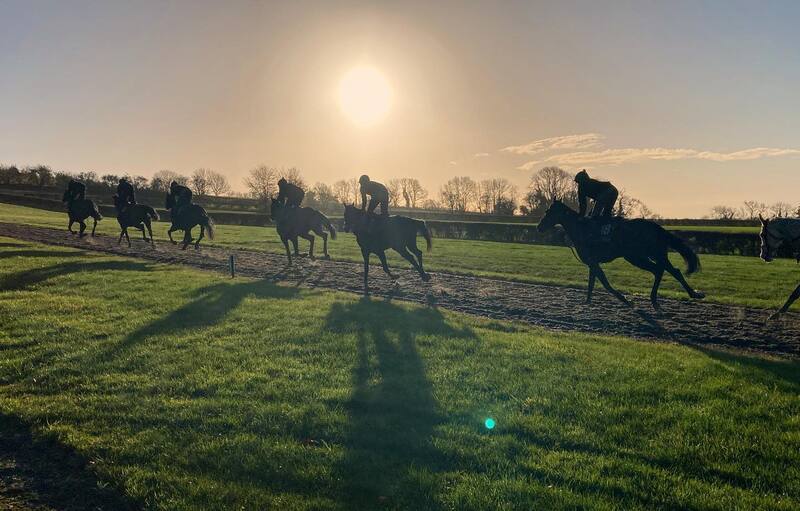 A huge happy December birthday to...