​As I sit here writing this, we are now on day four of no racing in the UK due to the frozen ground. It's frustrating as we have lots of runners we want to get out, some for their first run of the season, but sadly the elements are out of everyone's control. Fingers crossed it warms up quickly and we are back racing as soon as possible!

I'm hoping that you all had a lovely festive period and new year. We had a brilliant December with lots of winners, including two hat-tricks and wonderful double on Welsh Grand National Day at Chepstow. These are always great days for our amazing owners and much-deserved days for the team after all the hard work that they all put in every day.

​We welcomed a new member to the O'Neill team on December 20th when Joe and Jojo welcomed baby Finn into the world. He's a gorgeous little fellow and came up and met the team last week armed with giant cookies for the staff!

The snow fell heavily in mid-December and being one of the highest points in the country, we get our fair share! Although it's very beautiful, as you would have seen on our social media, it also takes a huge effort to keep the show on the road. The temperatures dropped to -14 degrees here too and the grounds team did an incredible job maintaining the gallops.

​Festival Trials Day takes place at Cheltenham Racecourse on Saturday 28th January and is followed by the Tattersalls January Sale. We will be there to hopefully purchase some new stable stars. If you would like to join us or are interested in any of the lots, please don't hesitate to get in touch. You can read all about the sale below.

Thank for all of your continued support.

A Treble at Newcastle
DECEMBER 8

After two inspections, we were delighted to see Newcastle go ahead with 3 out of our 4 runners all winning.

First up, Blue Shark and Jamie Brace followed up their victory at Ffos Las with another pleasing 6-length win in the opener.

Huge congratulations once again to Ros, Zakia, Sam, Sue, Paul and Tony of The Ocean Partnership. 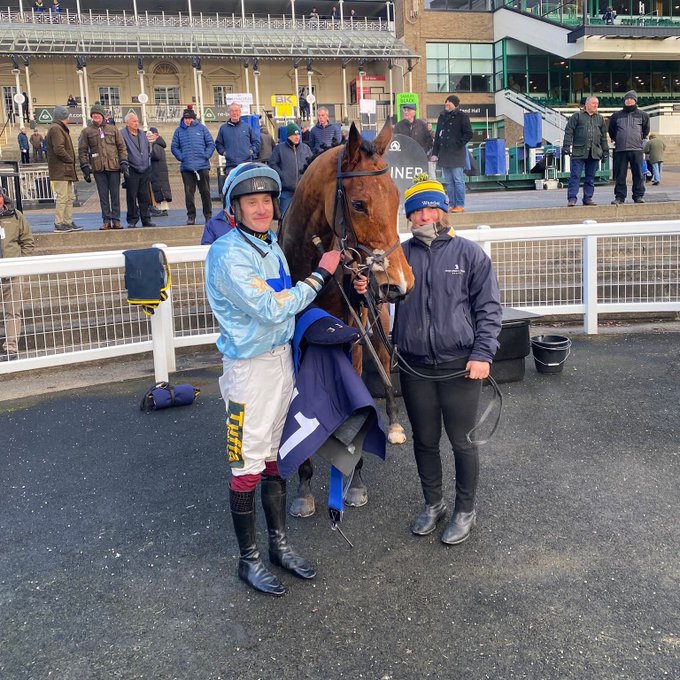 Blue Shark with Jamie and Tirana
Our second winner came in the very next race with Crebilly looking very impressive on his debut over hurdles under a confident Jonjo O'Neill Jr. ride and in the colours of JP McManus. 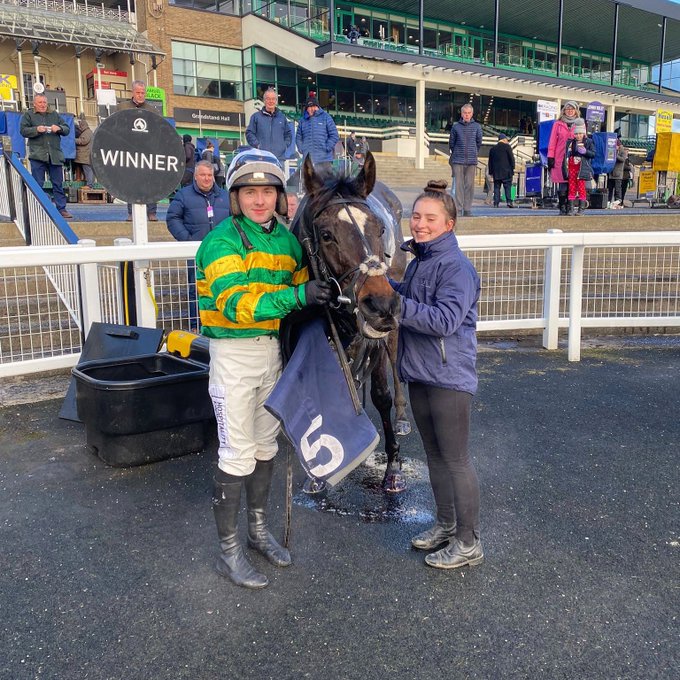 Crebilly with Jonjo Jr. and Shannon
​Mondbeg Genius and Jonjo Jr. lined up in the third race and jumped brilliant throughout to secure victory and a brilliant treble.

We are thrilled for Michelle and Doug of Barrowman Racing.

Many congratulations to all connections and well done to our team whose hard work has been rewarded with a fantastic day. 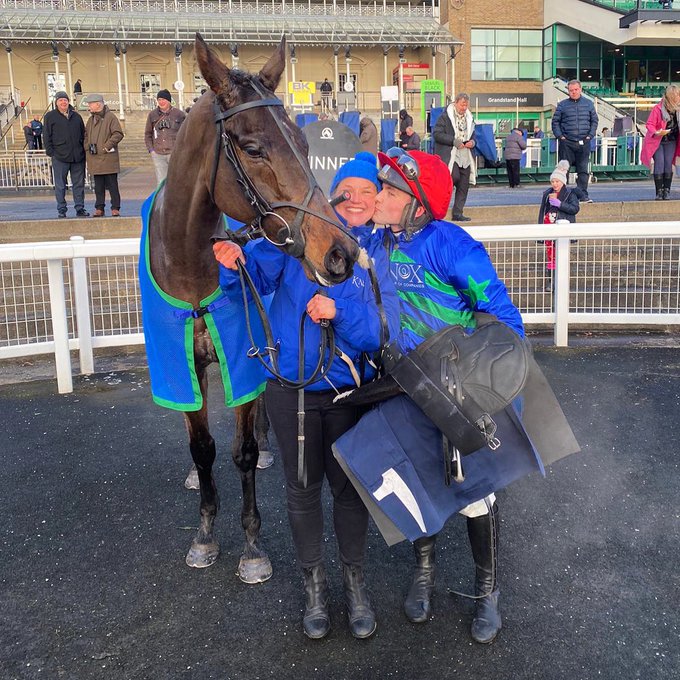 Jonjo Jr. and Jojo celebrating our treble in style!

Dollar Bae followed up her victory at Leicester 10 days ago with a gutsy victory at Southwell in the hands of Jonjo O'Neill Jr.

After getting to the front 2 out, there was no way the pair were going to sacrifice the lead and stayed on well in the the run in.

​Huge congratulations once again to Eric, Max and Angela, Lisa and Paul and Gillian and John of The Perfect Partnership.

Thank you to all the ground staff at Southwell for all of their efforts to get racing on. 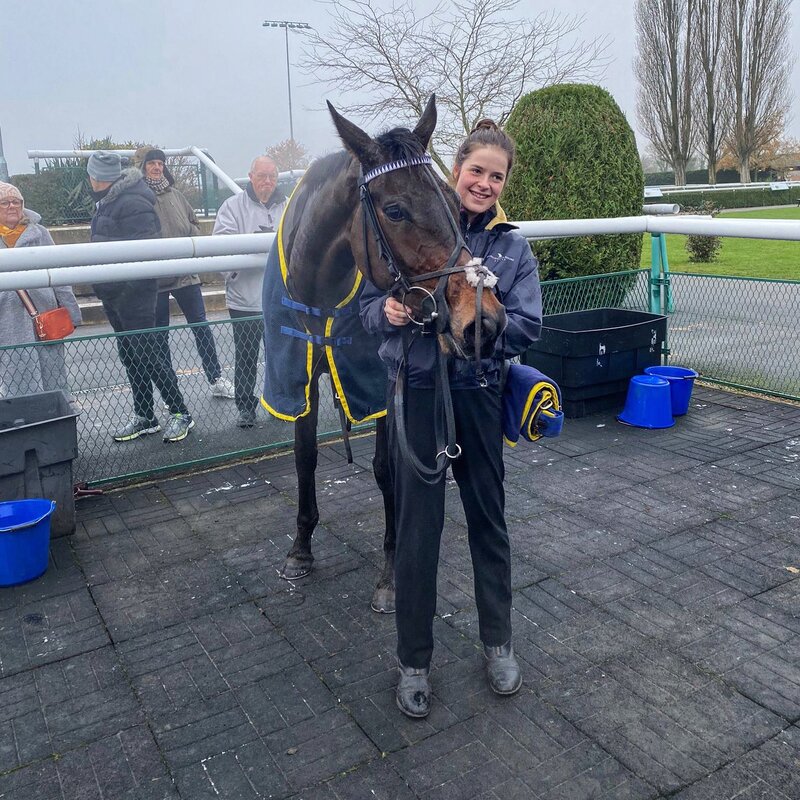 Dollar Bae and  Leah in the winner's enclosure at Southwell

Lock's Corner followed up his win at Catterick last month with another impressive victory at Ayr under a brilliant ride by Jonjo Jr.

Always in touch with the leaders, they were going easily around the home turn, before being pushed along and ridden after 3 out. They went third after 2 out, keeping on well and pulling away in the run in. 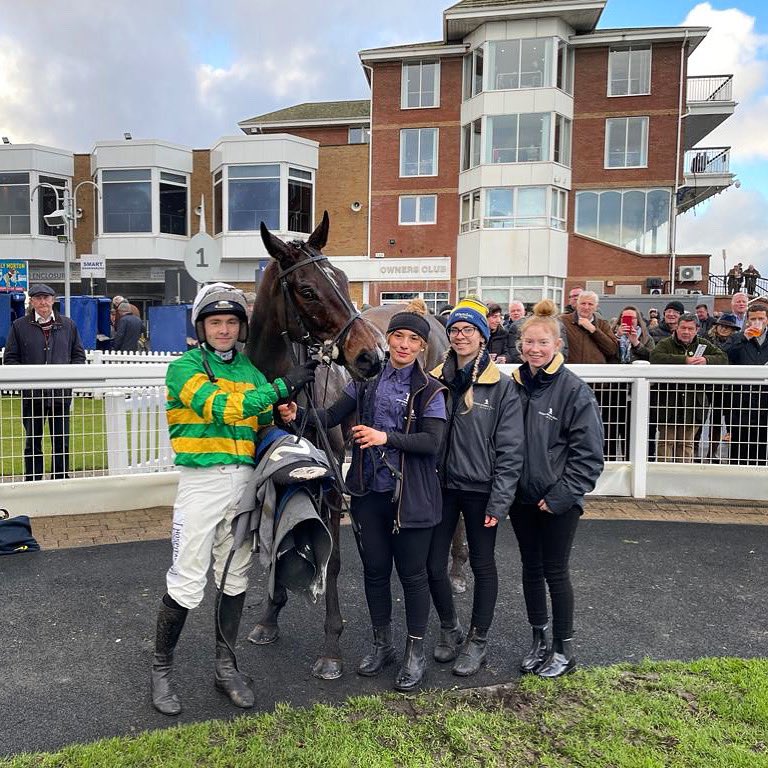 Blue Shark and Jamie Brace completed a hat-trick of victories in their last three runs with a hard-foght victory at Fontwell.

Always in touch with the leaders, he was pushed along 2 out where they found themselves a bit short of room when disputing the lead. He was ridden to lead in the run-in and was hard pressed towards the finish, just holding on for the win.

We are absolutely thrilled once again for ​Ros, Zakia, Sam, Sue, Paul and Tony of The Ocean Partnership. 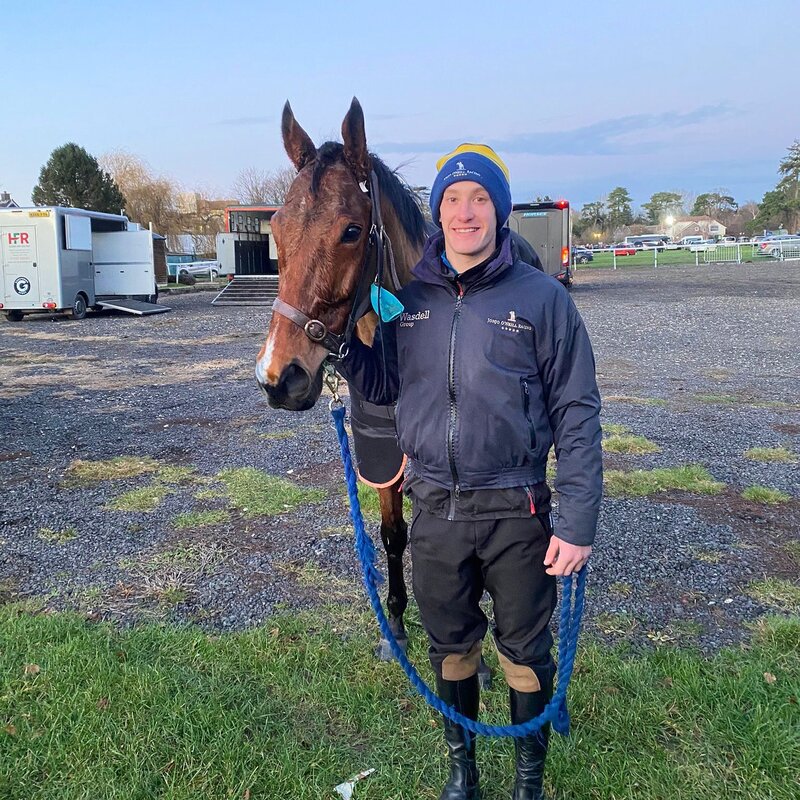 A festive double at Chepstow
DECEMBER 27

​We enjoyed a brilliant day in the rain at Chepstow with two very pleasing victories.

Saint Davy and Jonjo Jr. somehow managed to get their noses in front on the final stride of a pulsating race after being briefly headed on the run-in. There was a long wait while the photo-finish was being looked at and a huge roar around Chepstow when he was announced the winner.

We are absolutely thrilled for owner Mrs Gay Smith!

This was followed up three races later when Flight Deck produced a faultless performance to bring up a double for us and a treble for Jonjo Jr. on the day.

Many congratulations to  JP McManus and well done to the team for all of their hard work over the Christmas period. 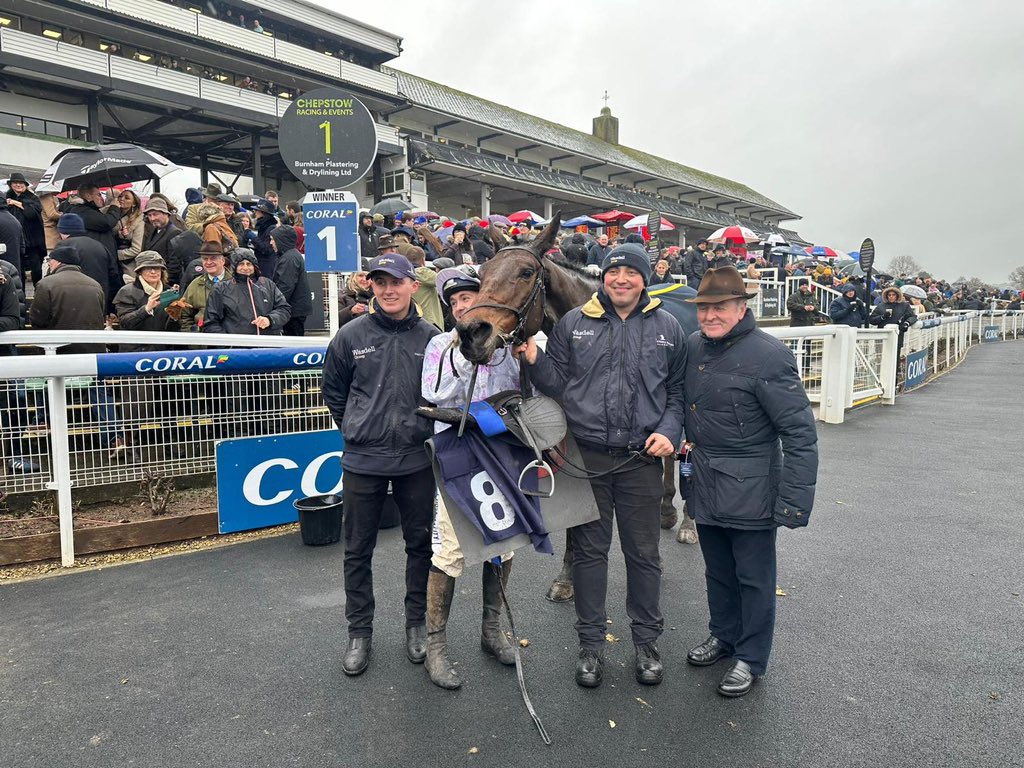 A great roar from the @Chepstow_Racing crowd greets the winning jockey after that amazing finish! pic.twitter.com/btCTeTeG7K 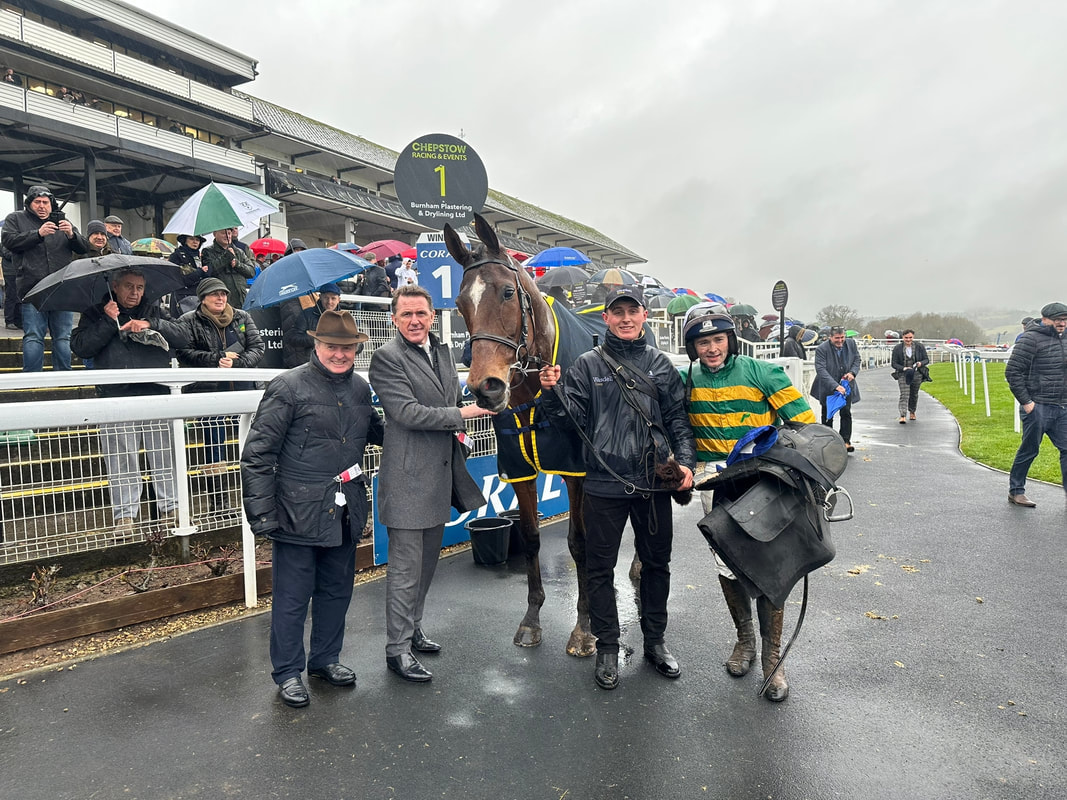 Flight Deck with Jonjo, AP McCoy, Jack and Jonjo Jr. after bringing up our double at Chepstow

We followed up our Chepstow double with a fantastic Haydock treble.

It all started in the opener when Lorcan Murtagh produced a superb ride aboard Sacre Coeur, staying on well and managing to get up to win by half a length. 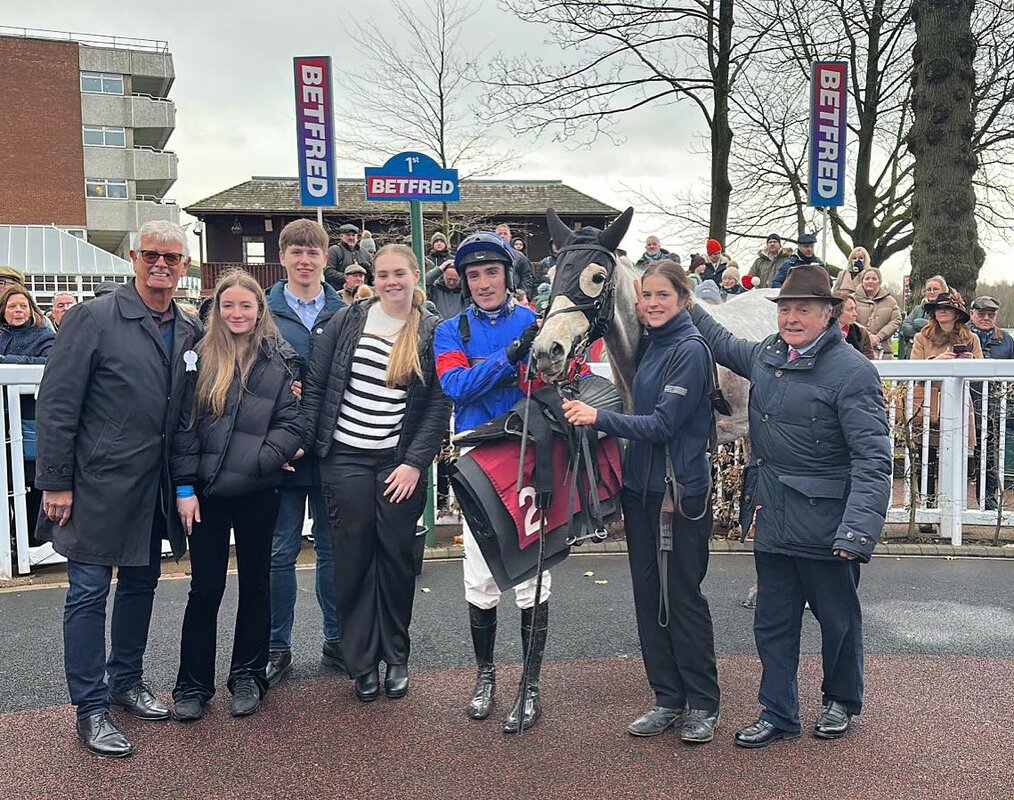 Sacre Coeur with Lorcan, Leah, Jonjo, Peter Mayo and family in the winner's enclosure at Haydock
​Iron Bridge and Jonjo Jr. got back to winning ways in the following race. After jumping nicely throughout, he was left alone when the only other runner Crystal Glory pulled up. It was lovely to hear the cheers as he popped the last few fences and we were delighted for The Exors of the late Trevor Hemmings, Kathryn Revitt and Trevor's family who were there to enjoy the win. 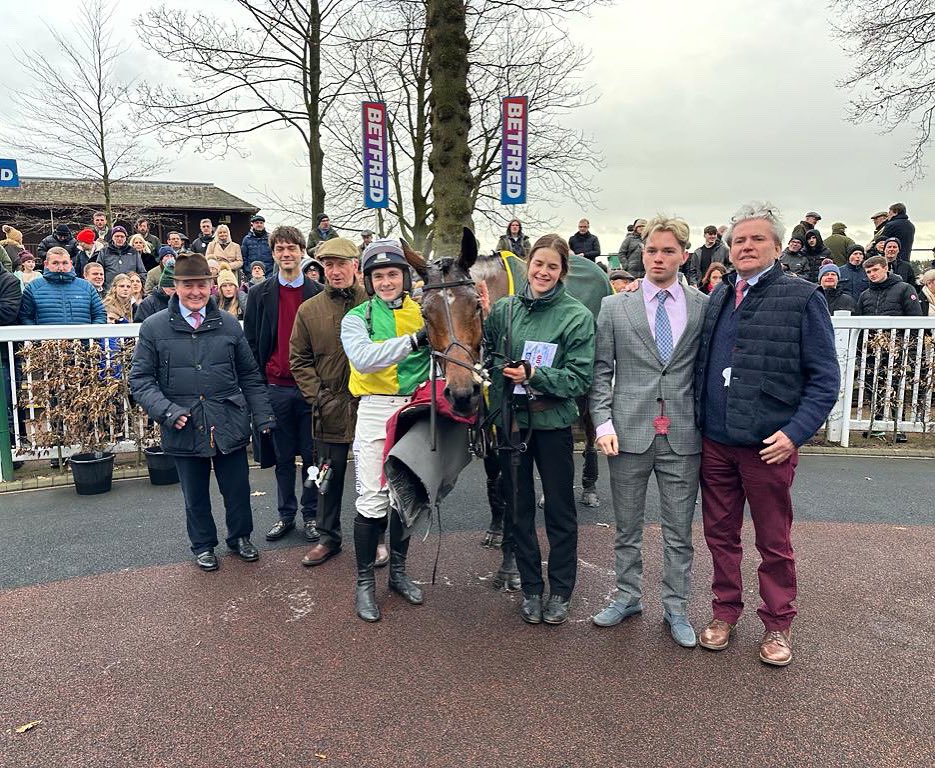 Iron Bridge with Jonjo, Ed, Michael, Jonjo Jr, Leah (who rides him every day), Sebastian and Peter.
Our treble was completed in the final race of the day when Pyffo and AJ held on incredibly well to win the bumper, capping off a brilliant day for the team and a lovely win  for owner Andy Ralph. 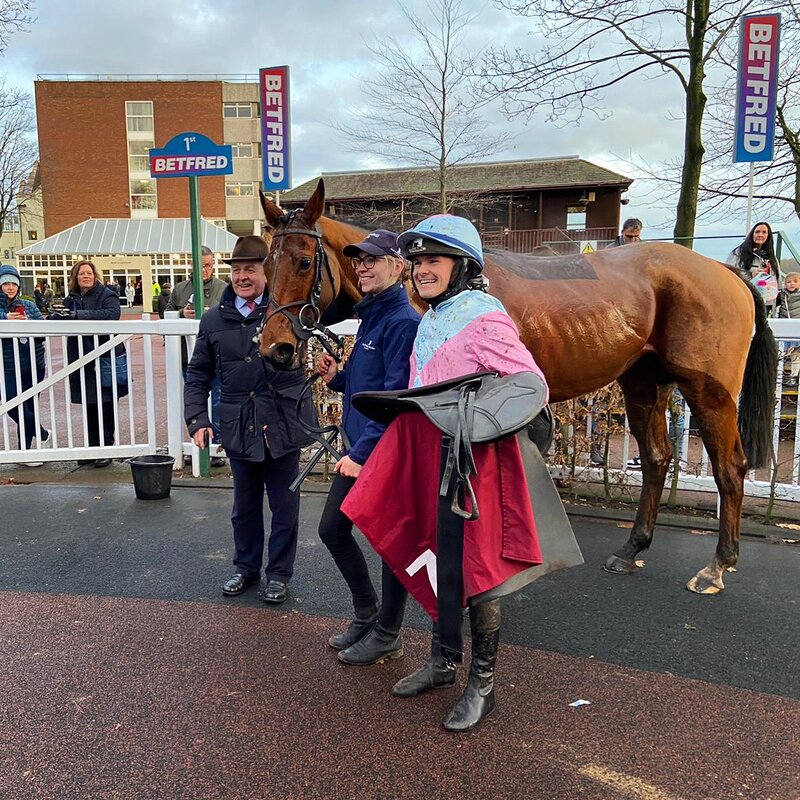 Pyffo with Jonjo, Alex and AJ after completing our treble at Haydock. 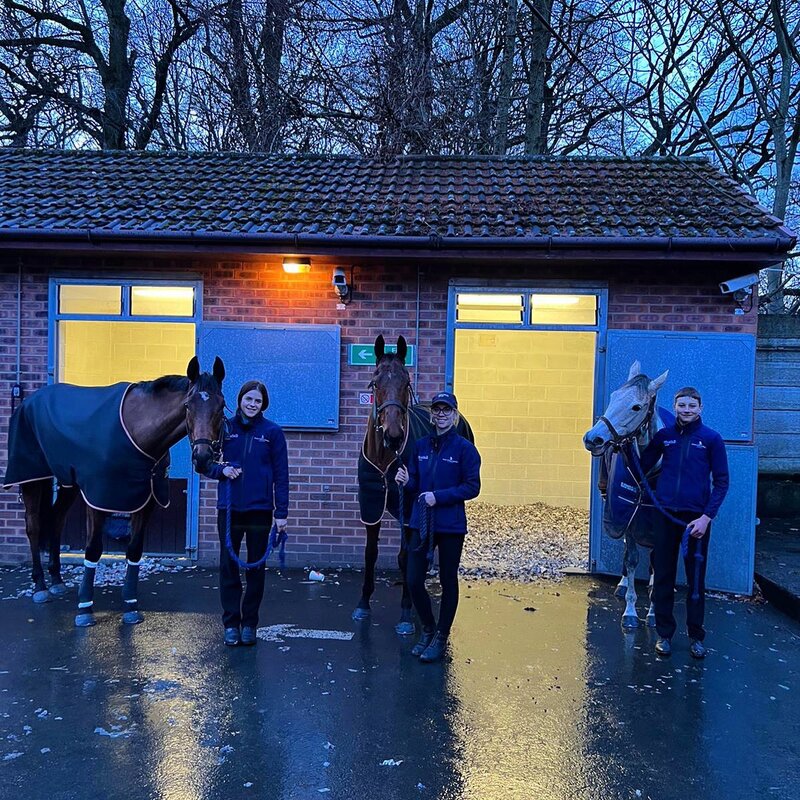 Monbeg Genius followed up his victory at Newcastle exactly a month ago with an impressive performance at Chepstow, in the hands of Jonjo Jr.

The pair were always going nicely and made smooth headway before 4 out, before making a challenge for the lead before 3-out. He was pushed along before the second last and disputed the lead over the last before striding away in the last 100 yards to win by 5 lengths.

Many congratulations to Barrowman Racing Limited and to Jojo who led in her first winner since the arrival of baby son Finn. 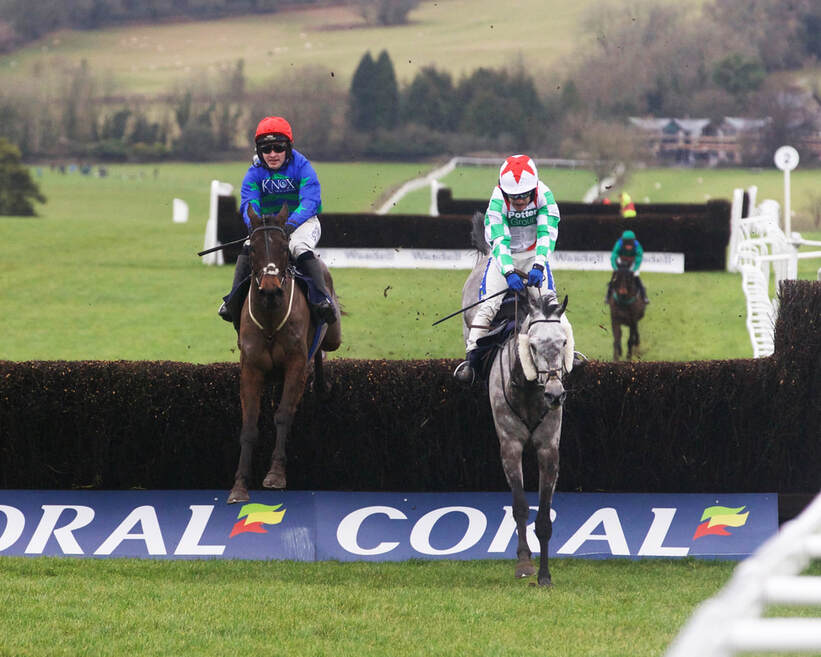 Monbeg Genius and Jonjo Jr. on their way to victory at Chepstow

Collectors Item returned to the winning enclosure after an impressive performance at Kempton under a superb Jonjo Jr, ride.

They raced in last but were always in touch with the leaders, before being pushed along before 2 out. It looked like they may have to settle for second until they found a brilliant jump and good momentum at the last to pull clear on the run in. 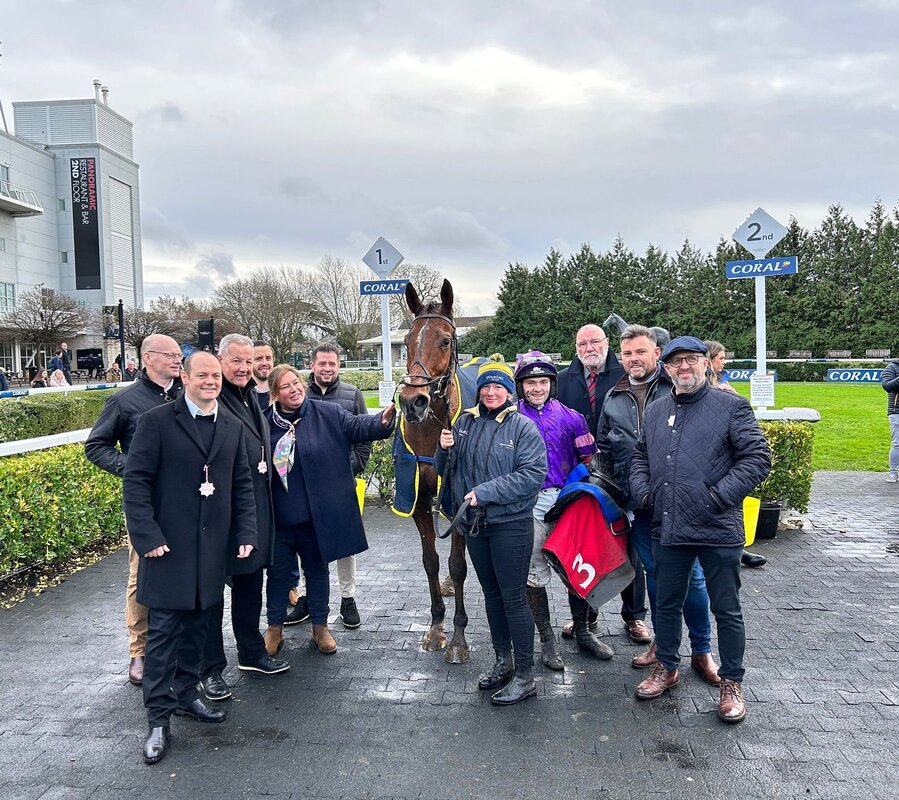 Collectors Item with Meg, Jonjo Jr. and the Jackdaws Antiques!

​We will be heading to the Tattersalls January Sale after Festival Trials Day at Cheltenham on Saturday 28th January.

​The sale will offer a select group of winning and placed point to pointers and NH form horses after racing on Festival Trials Day in the sale ring on Cheltenham Racecourse.

We bought two lovely horses at this sale last year for Jania and Michael Geoghegan, Inch House who has been placed in his first two races for us and Are U Wise To That who has won twice for us in impressive fashion already!

​If you are interested, please contact us at pa@jonjooneillracing.com and we would love for you to join us at the sales.

​You can view the lots of the sale via the button below.
VIEW LOTS

​EMPLOYEE OF THE MONTH

Many congratulations to Ionut Gabriel Ungureanu (Gabby) on being awarded our latest Employee of the Month.

As well as all of his yard duties, Gabby has stepped up to assist our travelling team during the busy period, driving horses to and from the races.

What is you favourite thing about working at Jonjo O'Neill Racing?
I really enjoy working with lovely horses and people.

How long have you worked at Jonjo O'Neill Racing
I have been here for 5 and a half years now. It has absolutely flown by!

What is you best moment in racing so far?
That has to be leading up Saint Davy at Chepstow on Welsh Grand National Day. It was a great race and he won by a nose in the photo finish. The noise when he was announced the winner was amazing!

​What do you enjoy doing away from racing?
Away from racing, I really enjoy watching films and spending time with my friends here at Jackdaws Castle. 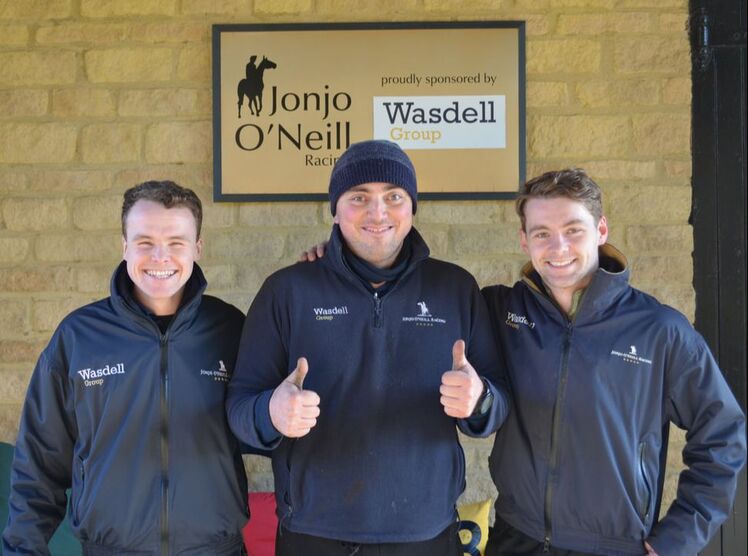 ​​WELCOME TO THE TEAM, BABY FINN!

We were absolutely thrilled to welcome a new member to Team Jackdaws with Joe and Jojo welcoming their new baby Finn to the world on December 20th.

Both mum (and dad!) are doing fine and it was lovely for him to come and meet the team with some amazing giant cookies from the Cotswold Larder in Broadway! 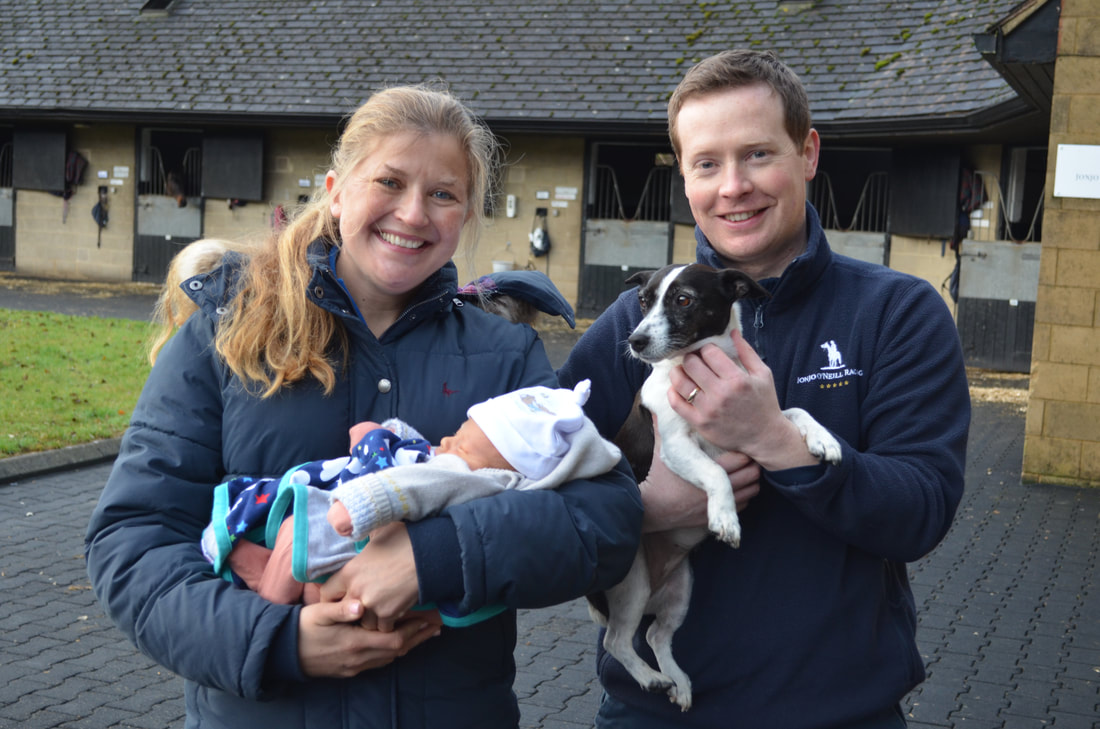 Jonjo will be taking part in a Cheltenham Memories evening that will take place at the brand new Nook on Five in Cheltenham on Wednesday 15th February.

‘Cheltenham Memories’ will be a chance to hear racing stories from a group of VIP guests including Jonjo O’Neill, Cornelius Lysaght, Jim Old and Steve Jones with our compere for the evening, Richard Phillips.

There will also be a raffle in aid of the IJF and some fun surprises thrown in so please bring cash! 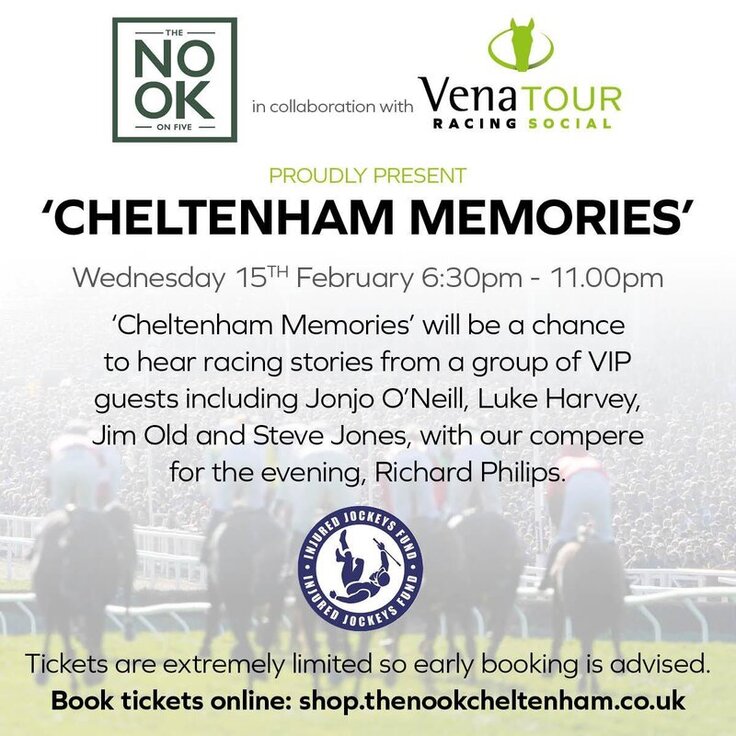 THE HALFWAY AT KINETON

​It has been confirmed that one of our local pubs, The Halfway at Kineton (3 miles from Jackdaws Castle) is being  given a new lease of life after being taken on by renowned chefs Nathan Eades and Liam Goff, both having previously worked in Michelin starred kitchens.

They are promising to deliver what they describe as ‘affordable luxury’, with a huge focus on championing local and quality ingredients and restoring the pub to its former glory.

The pub will be reopening to the public on 3rd February 2023 after a sympathetic renovation and also boasts 3 rooms, perfect for anyone visiting Cheltenham Races.

You can book a table on their website - www.thehalfwayatkineton.com 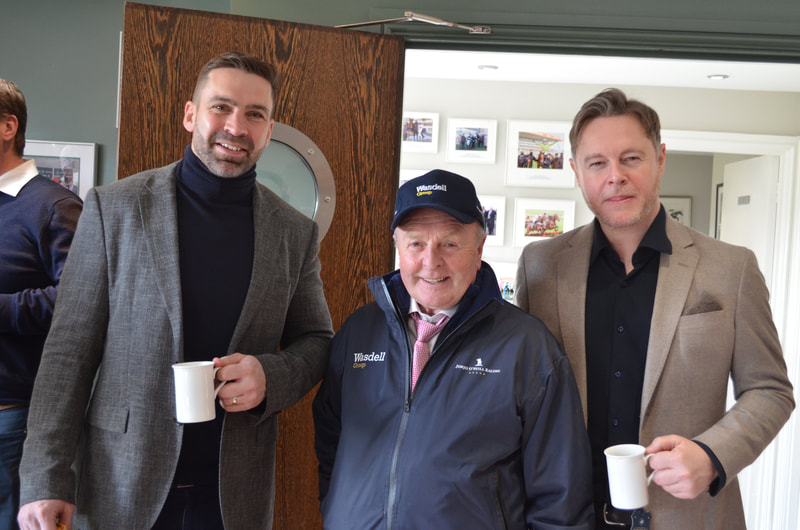 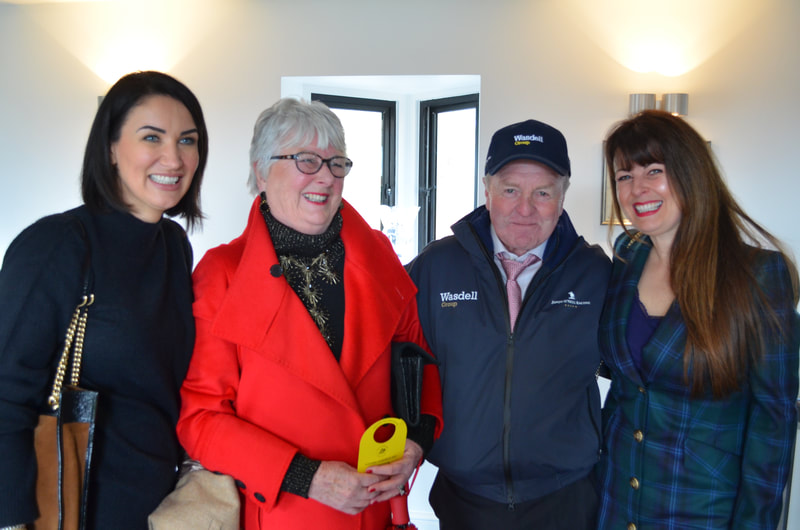 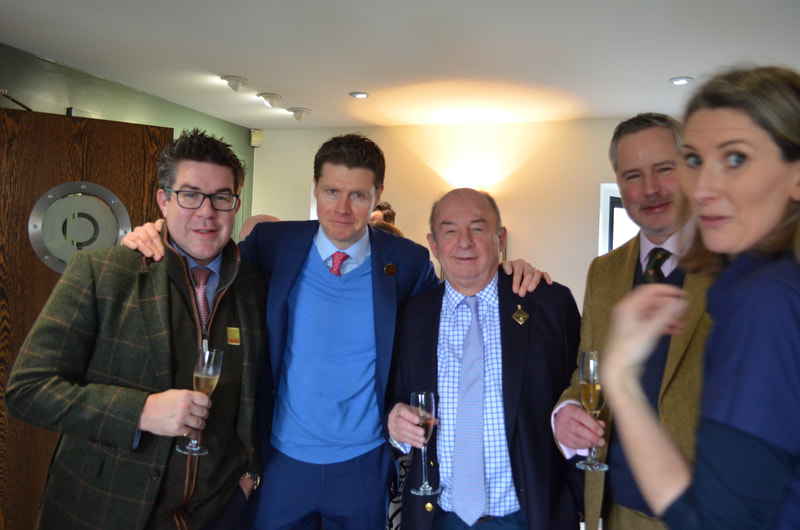 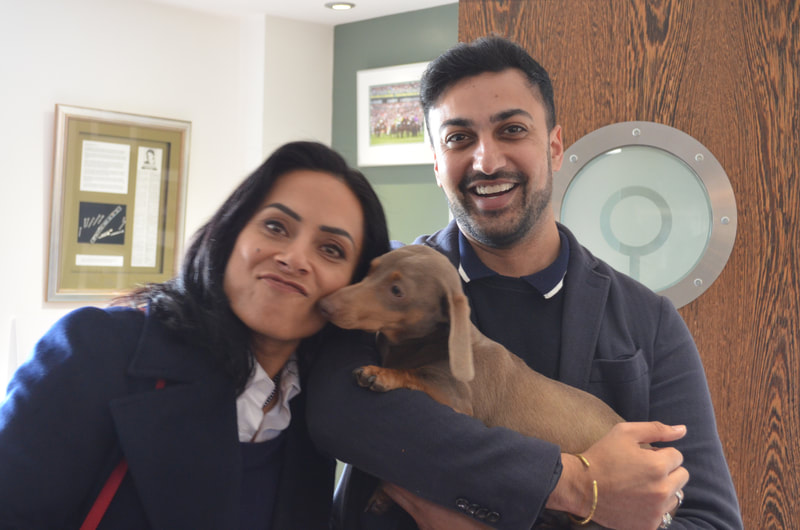 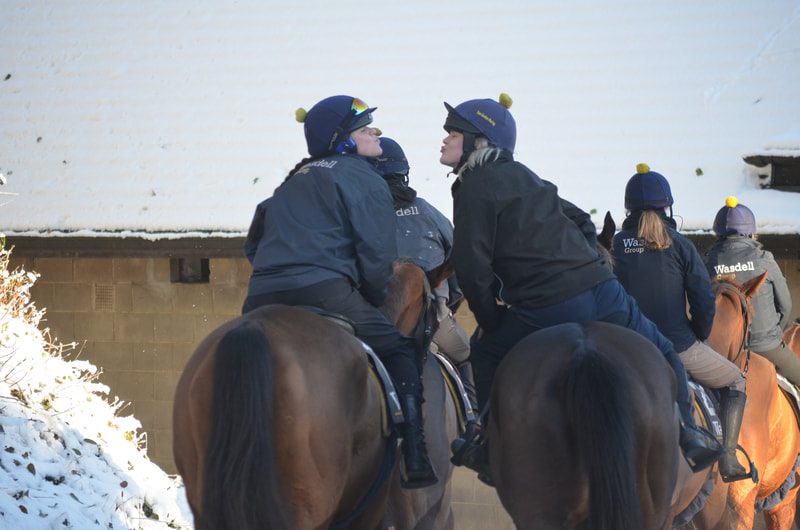 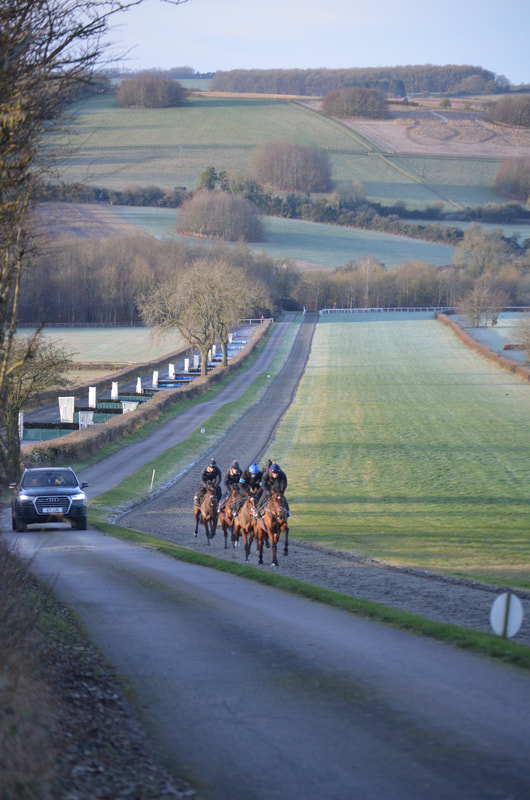 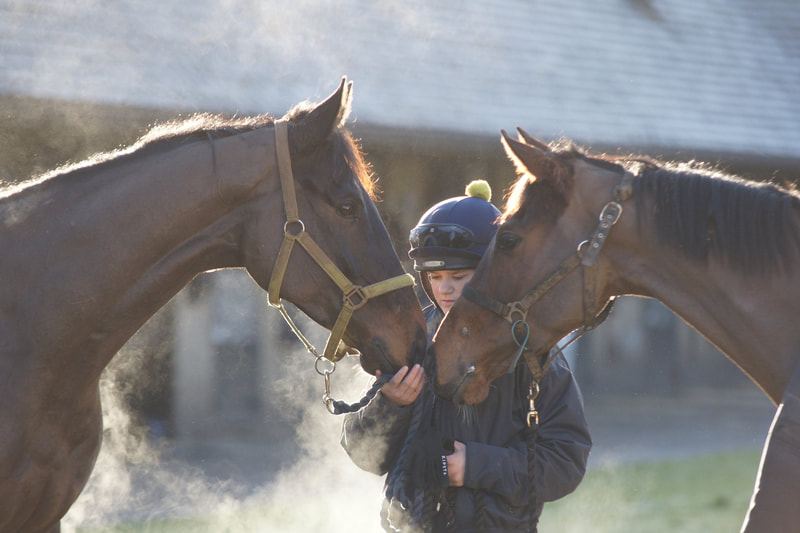 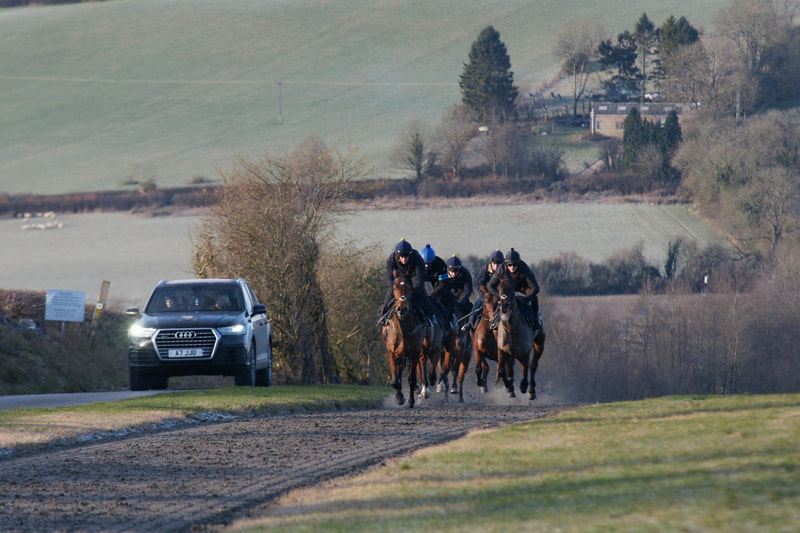 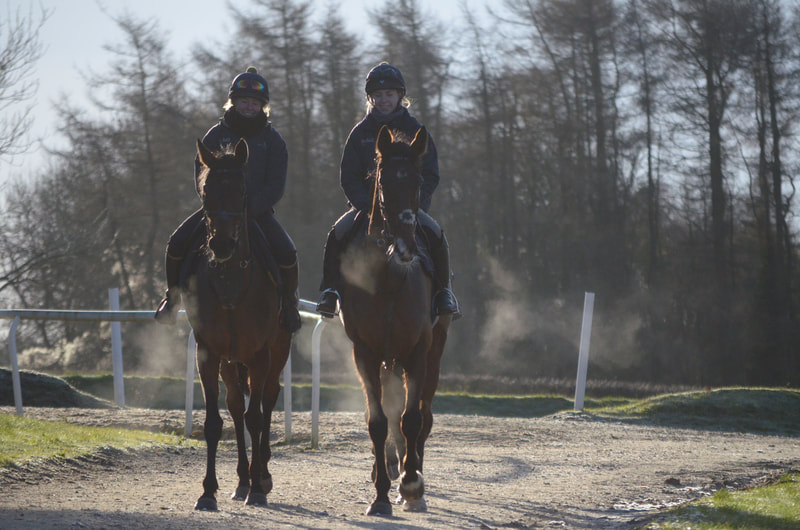 A huge happy January birthday to