​Extreme highs and lows are part and parcel of Jump racing but few can compare with the exhilaration of 29th June, when Patsy Byrne led Tominator into Newcastle's winners enclosure and the desperate sadness shared by everyone at Jackdaws on 6th October with the news that Patsy had suffered a massive heart attack and died. Tributes to Patsy's contribution to horse racing, greyhound racing – he owned the Derby winner – and to the world of construction gave some idea of how this energetic, friendly family man would be missed. 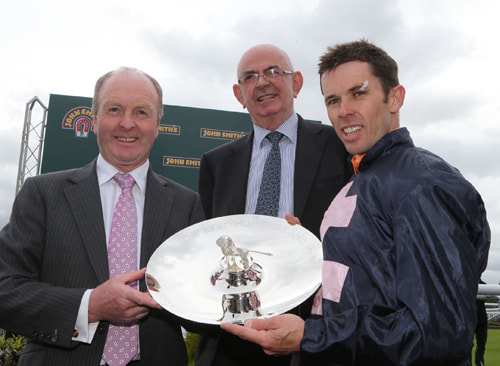 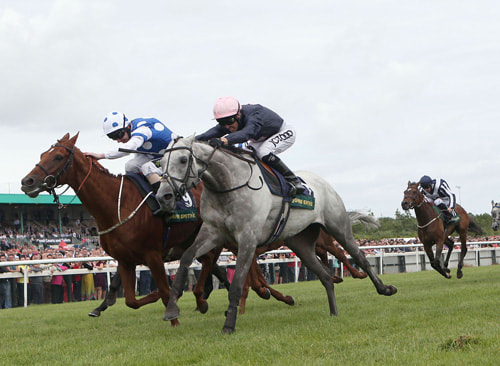 ust one year earlier, Jonjo had acquired Tominator for Patsy from the Flat racing yard of Reg Hollinshead. The attractive grey colt by Generous had won a Maiden race and Nursery suggesting he was smart enough to compete in the Chester Vase. He proved only good enough to beat two home and it was not until his seventh run as a 3 year old that he made it back to the winners' circle. That was in a 12 furlong Handicap on the All Weather at Wolverhampton in November, a far cry from where he had set out in the spring.

Tominator's fifth run as a 4 year old was in the 2011 Northumberland Plate, carrying 8st 8lb, his first over two miles and he proved an unlikely 25/1 winner for jockey Paul Pickard.

As a 5 year old, he could get no closer than 13th of 16 in the Chester Cup and 8th in the Ebor before winning at Chester in September.

When he came to Jackdaws, Tominator had an entry in the Cesarewitch. That run, finishing third under Jamie Spencer, gave Jonjo plenty of encouragement for a potential crack at a high level hurdling campaign with the World Hurdle in mind. Next stop was Bangor-on-Dee a fortnight later for his hurdling debut. He won alright but he then proved disappointing at Cheltenham in November and also when scraping home at Sandown in February. The message was clear enough - he was not relishing this jumping game. Ambitions were downgraded and when he was pulled up in the Imperial Cup, there was only one option for Jonjo and Patsy, to revert to the Flat.

That decision was almost rewarded first time out when he was narrowly beaten into third in the Chester Cup, coming with a late run that needs everything to go right at a track as tight as Chester. Another tilt at the Northumberland Plate was definitely on the cards albeit with the welter burden of 9st 10lb, a full 16 lbs more than he had carried to win two years earlier. His partner this time was to be ex-Jump jockey Graham Lee.

Newcastle may not have the twists and turns of Chester but an ultra-competitive field in the country's richest Handicap is a challenging prospect for a horse to be ridden from off the pace. Weaving their way through the field, this way and that, Graham brought Tominator with as finely timed run as you are ever likely to witness, just getting up on the line. In doing so, he became the first horse since the great Tug of War back in 1977 and 1978 to win two Northumberland Plates and capped off an extraordinary June for Jonjo to follow up Well Sharp's win in at Royal Ascot.

"I couldn't be happier", said Jonjo immediately after the race. "Patsy has been a very lucky owner for us. He was the first owner to buy a horse for me when I had cancer.

Graham is a brilliant jockey and a great tactician. He knew everything that was happening and did everything right. He's a very good rider and the horse produced on the day".