Hello to you all once again.

I hope you are all enjoying the summer. We had a few days at Royal Ascot a couple of weeks ago and I can't remember it being hotter that it was on the Friday!

Although we don't have too many summer runners, myself and the team have been incredibly busy here at Jackdaws Castle.

Many of the horses are out on their holidays (we have shared some pictures below) and the yard has had a thorough clean and spruce up and lots of the team have enjoyed a bit of time off.

We have enjoyed 11 winners and 36 places from our 57 runners so far this summer. We are very pleased with a very healthy 20% strike rate at this time of the season and we're already pushing £100,000 in prize money.

Away from the course, we have been productive at lots of the sales in the last month buying some really exciting horses with a bright future. You can see all of the ones for sale below or on our "Horses For Sale" page. If you would like more information on any of these, or are thinking of entering the amazing world of racehorse ownership, please don't hesitate to get in touch.

I was very saddened to hear to hear of passing of Lester Piggott a couple weeks ago. He was a legend of the sport and true gentleman, who I was lucky enough to ride with on the flat a few times. It was lovely to see his his achievements celebrated in the Royal Ascot programme last week.

I would also like to take this opportunity to wish Alain “Squeak” Cawley a wonderful retirement. Alain has called it a day in the saddle and will now become a jockey's agent to many of the lads, including Jonjo Jr. "Squeak" was a classy rider and a fantastic supporter of ours over the years. Here’s to a brilliant future, I'm very sure he will do a grand job. 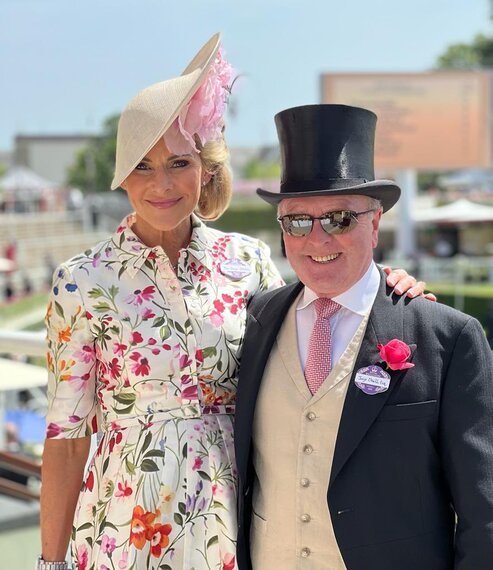 Red Maple wins at Worcester
MAY 5

Kevin Brogan produced a superb ride aboard Red Maple to bring up our first winner of season at Worcester.

The pair were always prominent and led after the last, running on well in the final 110 yards.

Many congratulations to owner Toby Cole and to Kevin who rode out his claim. 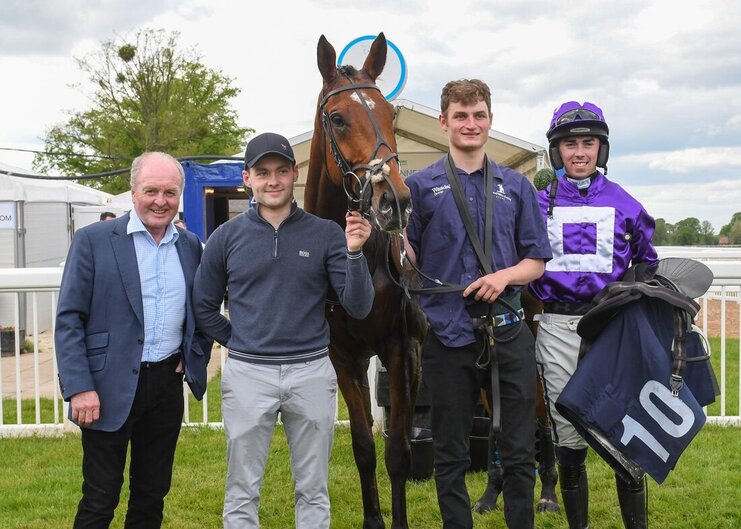 Steady The Ship followed up his victory at Southwell in April with another over the same course and distance in the hands of Jonjo Jr.

The pair made all, jumped well throughout and stayed on well to win by 1½ lengths.

Huge congratulations to Jon, Oli and Nick from Pitch Racing. 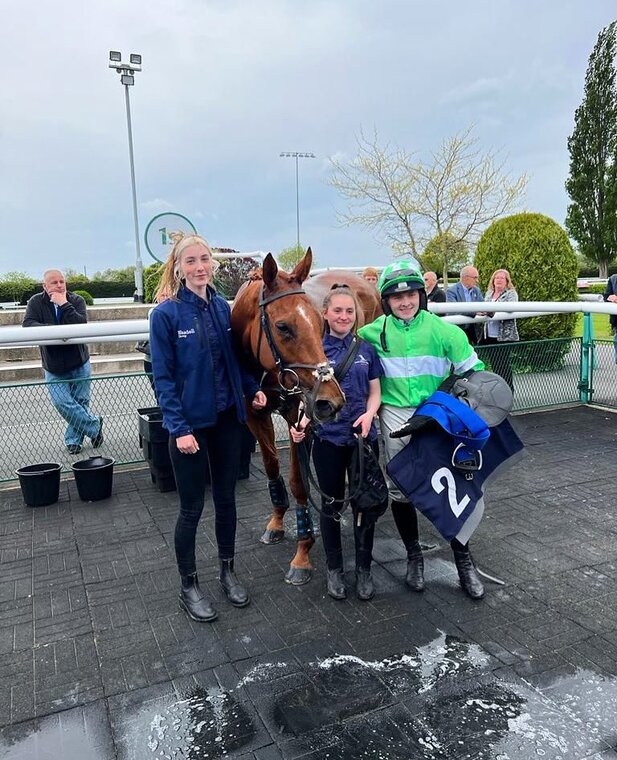 Steady The Ship with Verity, Shannon and Jonjo Jr.

New Beginnings wins on debut at Worcester
MAY 11

New Beginnings got off to the best possible start with victory on debut in the hands of Nick Scholfield at Worcester.

He was held up in rear before being pushed along  over 3f out. He led inside the final furlong keeping on well to win by 1¼ lengths.

We are thrilled for owners Martin and Iwona Tedham. 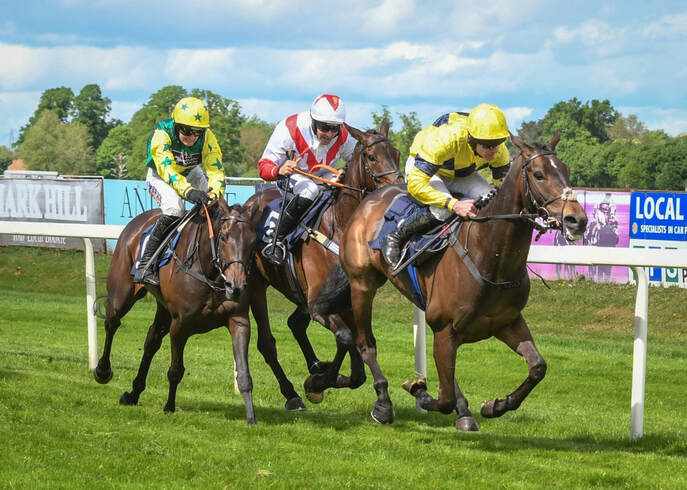 Apache Creek wins at Warwick
MAY 18

Apache Creek and birthday boy Kevin Brogan put in a fine performance to win at Warwick.

Kevin had him held in midfield for most of the race, before making headway and and going second 4 out. He joined the leader 2-out and went clear after the last winning comfortably in the end.

We are absolutely delighted for the whole of Team Tuff! 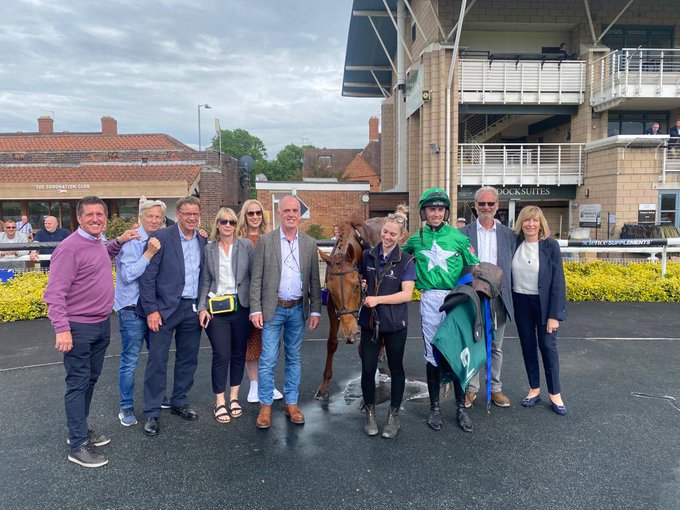 Gulliver Collonges wins at Warwick
MAY 25

Held up in midfield for most of the race, the pair were always travelling nicely. They made good headway and joined the leader 2-out, before pulling away to win well. 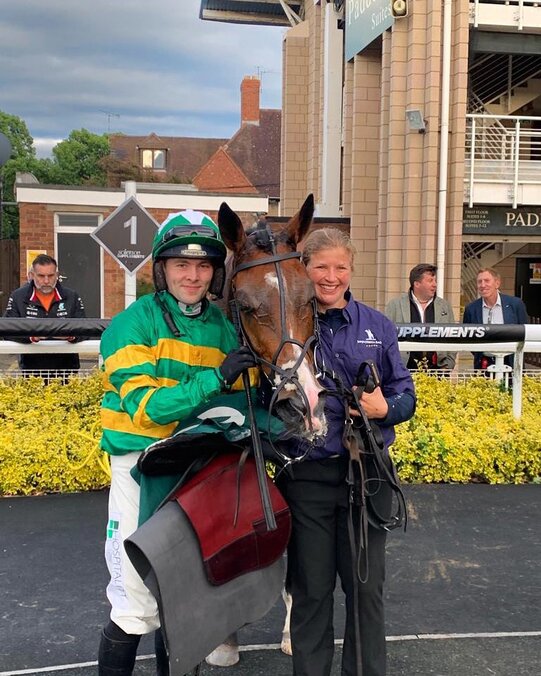 Betty's Banjo got off the mark at the second time of trying in fine style at Uttoxeter, in the hands of Jonjo Jr.

She was prominent throughout and was pushed along before making a challenge and disputing the lead  2 out. They went clear approaching the last and ran on impressively up the run-in to win by 9½ lengths. 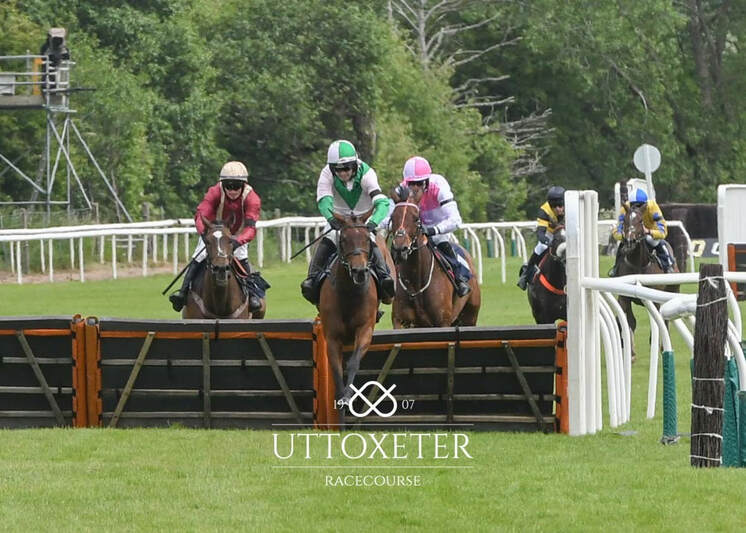 Betty's Banjo on her way to victory. Photograph taken by Nigel Kirby.

La Domaniale impressed on her first time over fences at Uttoxeter in the hands of Jonjo Jr.

The pair were contesting the lead from 4 out and jumped the last in the air together with Well Briefed, before pulling clear and winning well by  2¾ lengths. 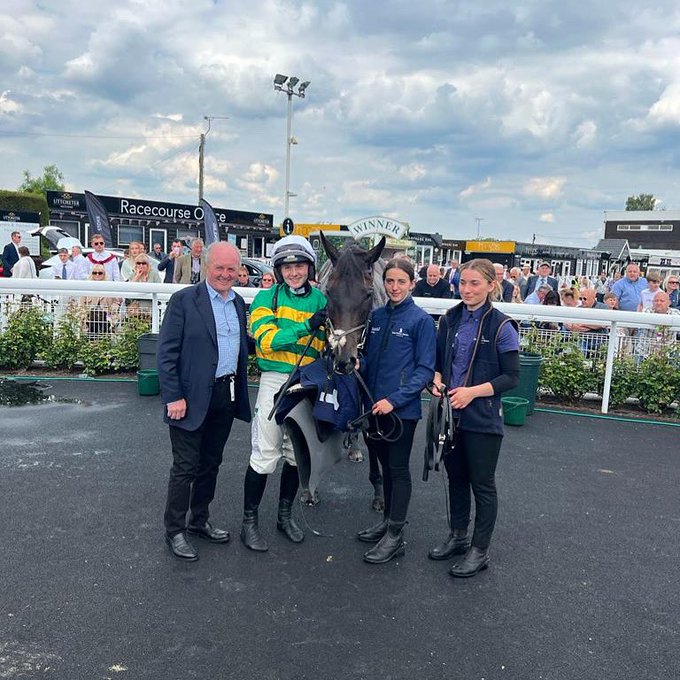 The pair were always prominent and survived a stumble at the 4th fence. They made a challenge after 4 out and rode to the lead after 2 out, going  clear after last and staying on strongly to win by 8½ lengths.

Many congratulations to Martin and Iwona Tedham. 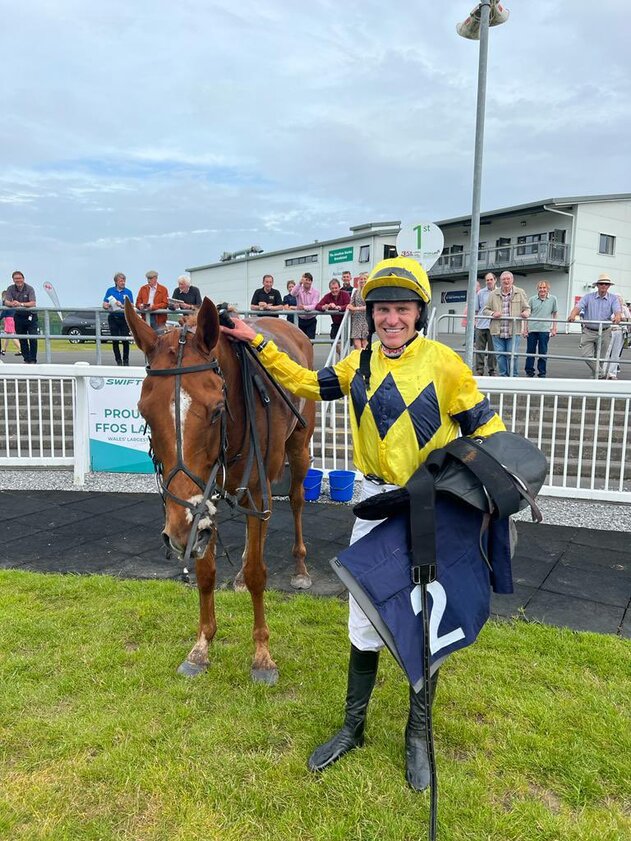 Carys' Commodity won a two-horse-race at Stratford in the hands of Jonjo Jr.

After a couple of small mistakes, he pressed the leader and was going best before 2 out before being shaken up to lead just before last. They went well clear in the run-in to win easily by 17 lengths. 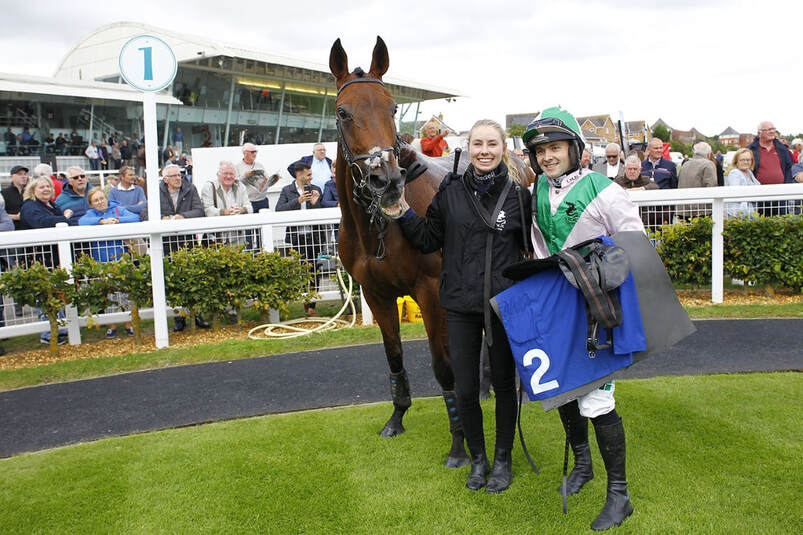 Rocked Up gets off the mark at Market Rasen
JULY 3

Rocked Up produced a lovely display of hurdling in the hands of Jonjo Jr to win at Market Rasen.

Held up in midfield, she was pushed along and made strong headway after 3 out, before leading 2 out. She was ridden after the last and kept on strongly on the run-in to win by 2¼ lengths.

We are all thrilled for owners Steve and Shirley Anne Chick, Richard Marks and Paul Evans. 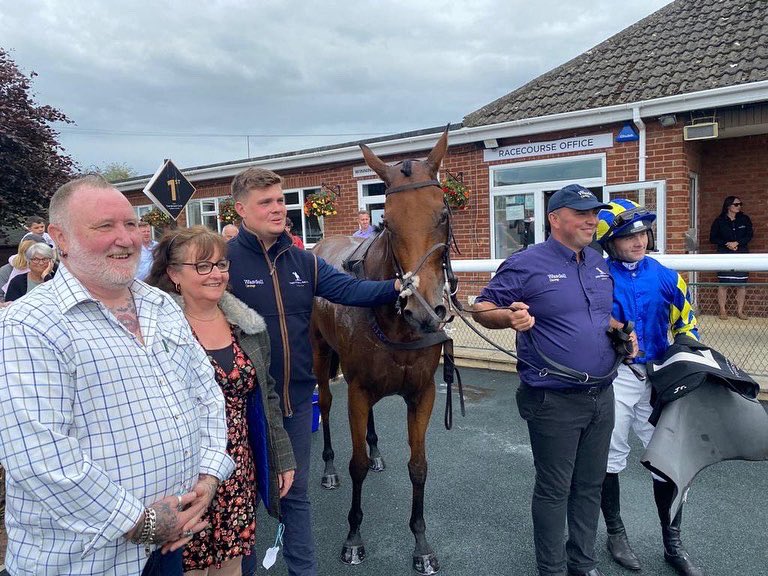 Rocked Up with Steve and Shirley Anne Chick, Harrison, Gabby and Jonjo Jr.

La Domaniale produced a classy jumping display when winning again at Uttoxeter in the hands of Jonjo Jr.

The pair made all and out-jumped their rivals to see out a 7-length victory. 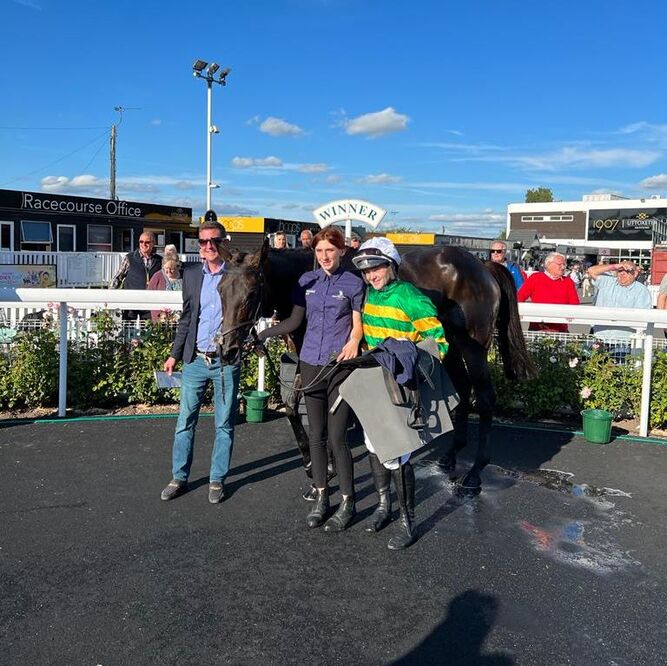 We have been incredibly busy at the sales recently and have bought some very exciting prospects which I'm really looking forward to get going with.

Jonjo, Jonjo Jr and AJ, with the help of our Bloodstock expert Matt Coleman, have spent weeks researching the pedigrees, before heading to the sales a few days in advance where we viewed and assessed all the horses.  We were all thrilled to have been the successful bidder on lots of high-quality horses.

We sent out a Bulletin last week with all the available horses which you can find HERE.

If you would like to get involved, whether it be Sole, Partnership or Corporate Ownership, and have any questions, please don't hesitate to contact Jonjo and Jacqui on; 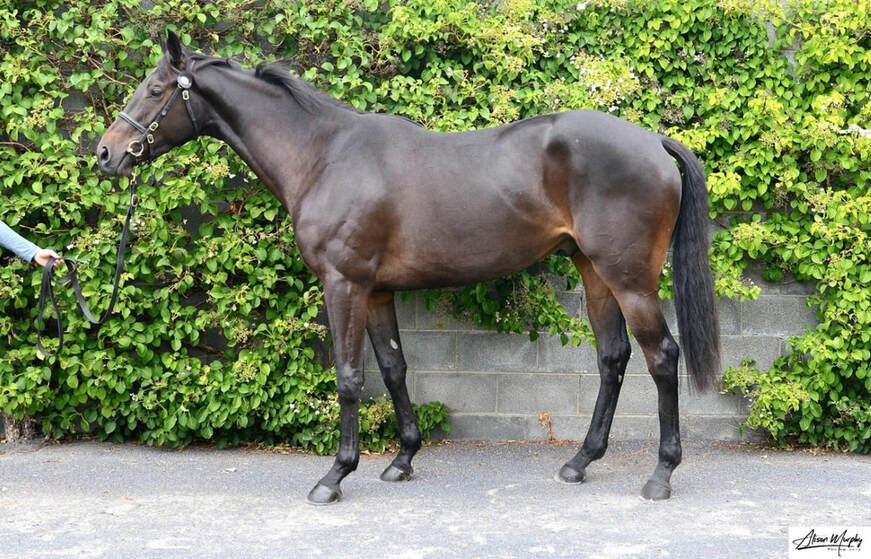 A team here from Jonjo O'Neill Racing are taking part in this year's The Great Racing Welfare Cycle on 16/17 July.

Jonjo Jr, AJ O'Neill, Jason Kiely and Aaron Mcloughlin Sutherland will be cycling under the name of Jackdaws Rangers.

Teams will start their challenge at 12 noon on the 16th July and leave the racecourse for an undulating, challenging, 30km, beautiful ride through the Cotswolds including climbing the imposing Cleeve Hill to enjoy the breath-taking views across Gloucestershire.

This challenge is based on a team of FOUR people, TWO will be out on the route cycling while TWO rest at the “Riders Camp” based at the racecourse.  The four riders will tag-team day and night for 24 hours finishing at noon on the 17th July, crossing the finishing line to the cheers of their friends and family.

A BBQ for all the riders and supporters will take place on the afternoon of the 17th to celebrate the incredible achievement of all of those who have taken part and supported.

The team has to raise £3,000! If you would like to donate, the lads would be extremely grateful!
DONATE HERE 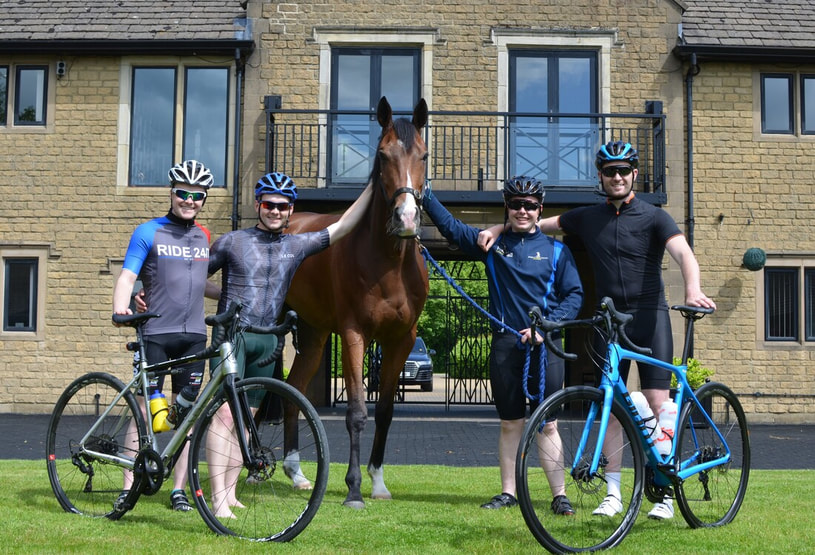 ​Many of the horses have been enjoying their holidays out in the fields and paddocks here at Jackdaws Castle.

We will start bringing them back in next week when they will start a light exercise programme throughout July, which will include time on the walker and trotting on the round gallop, before stepping up their training into August.

WORK ON THE GALLOPS

We never stop trying to improve the gallops here at Jackdaws Castle, and the quieter summer months are the perfect time to do this.

Doc, Florin and Fred have worked tirelessly renewing and maintaining the 5-furlong gallop ready for the the busier months ahead.

We will be supporting Jacob Pritchard Webb on his 140-mile hand-bike ride across the UK in July.

After a fall in 2020, Jacob A broke and displaced his T4 vertebrae which left him with a compressed spinal cord and resulted in paralysis from the waist down.

Jacob is supporting the Injured Jockeys Fund and the Matt Hampson Foundation  on his ride between ride between Cheltenham and Newmarket racecourse.

You can find out all about the ride and donate HERE, 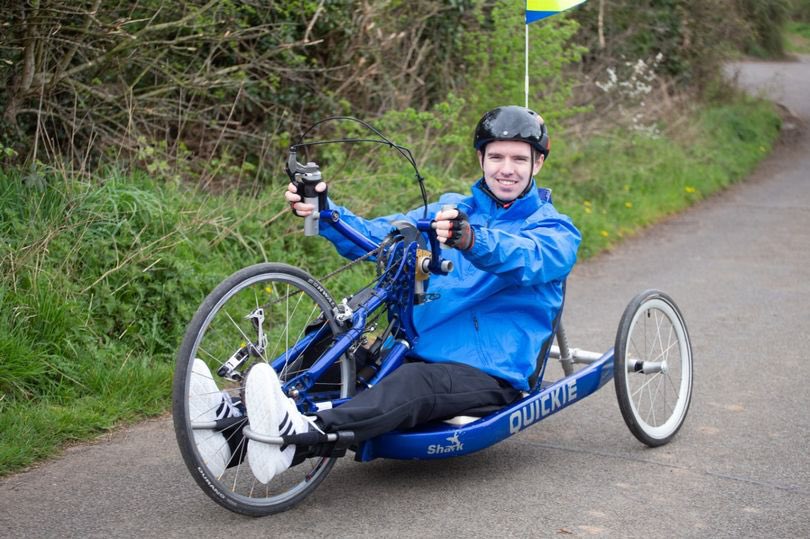 A huge happy summer birthday to...