THE NEW SEASON IS IN FULL SWING!

October is always a busy month. After the summer, we are always waiting for a drop of rain and then all of a sudden, the ground becomes a bit softer and we can send lots of runners out.

Although I love the opener at Chepstow, The Showcase Meeting at Cheltenham, followed by Aintree on the Sunday always feels like the season has properly started, and was great to see An Tailliur, Cloth Cap and Petite Tonnerre all run well.

We have enjoyed some really pleasing winners throughout October. It's a very exciting time, but also quite a nervous time as you hope the horses are as good on the track as we think they are at home!

Are U Wise To That, Collectors Item, Springwell Bay, Saint Davy and Mellificent were all very impressive and it was absolutely amazing to see Gwennie May Boy win on his first ever run at 80/1 for owner Gwendoline Clarke at Bangor.

The Clarke family gave a great interview on Sky Sports Racing with Luke Harvey after the race. Their dream of one-day owning a racehorse was only bettered by it winning in its first race. It's what racing is all about and luckily for them, Gwen's son Nick had £25 each way on him!

Iron Bridge was really impressive up at Carlisle. Jonjo gave him a great spin and a really good education too.

And most recently, it was brilliant to see Manintheshadows win again at Hereford, his 4th time in the winner's enclosure. We are all delighted for owner Andy Riley.

I am very pleased with how the horses are going. Many seem to be hitting the crossbar, claiming a place and that stands them in good stead for their next runs.

We enjoyed a wonderful evening at The McCoy Awards at Cheltenham a couple of weeks ago where our owner Pat Hickey picked up an award for An Talliur being the best Novice Hurdler last season. It was lovely to celebrate with Pat and Nan and some of the team from Jackdaws.

November is here already and we look forward to many more runners and, hopefully, lots more winners!

Thank for all of your wonderful, continued support.

Are U Wise To That followed up his bumper win at Warwick in March with a debut victory over hurdles at Uttoxeter under a composed ride by Jonjo Jr.

Prominent throughout, the pair were going best 2 out. Shaken up to lead before last, they pulled away on the run-in to win comfortably. 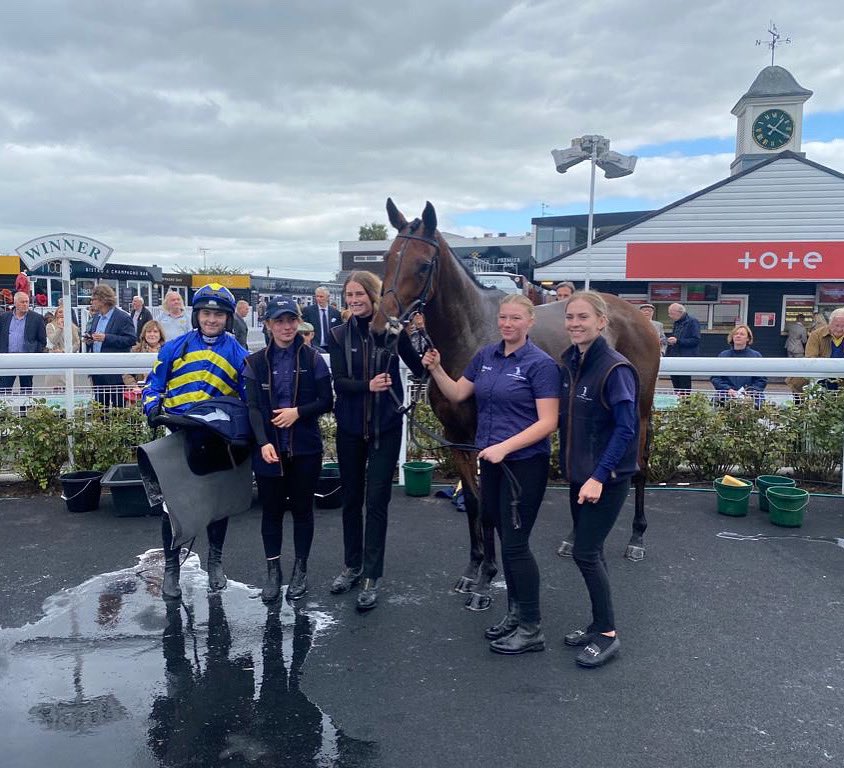 Are U Wise To That with Jonj, Tirana, Georgia, Megan and Alex after winning at Uttoxeter

Collectors Item got off to the best possible start over hurdles today with an impressive victory at Chepstow under a brilliant ride by Jonjo Jr.

Sitting in midfield, he was pushed along after the 5th and made good headway around the home turn. They were prominent after 3 out, before leading at the last and staying on very well,

We are thrilled for ​Les and Vicky, Eric, Peter and Julia, John, Ray, Nathan, Steve and Sheila of Jackdaws Antiques! 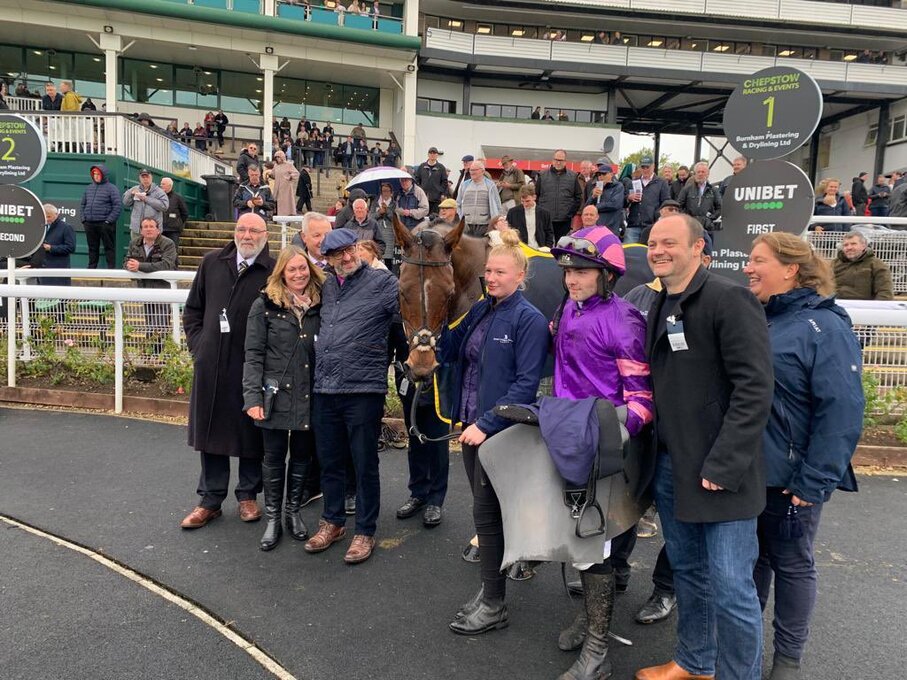 A Double at Carlisle!
OCTOBER 13

Springwell Bay and Saint Davy completed a wonderful double up at Carlisle in the hands of Jonjo Jr.

Springwell Bay was always prominent and  led going easily 2 out. He faced a challenge and was pushed along on the run-in and kept on strongly, winning going away.

Jonjo Jr. took the wider route around the outer and was always in touch with the leaders and went into the lead with just over a furlong to travel, keeping on well to win by 4 lengths.

Huge congratulations to owner of both horses Mrs Gay Smith!

Mellificent and Jonjo Jr. brought up our 23rd winner of the season in the bumper at Uttoxeter.

Travelling well in midfield, the pair made good headway around the home turn and soon led 2-furlongs out, She was shaken up with a furlong to travel and built a good lead and was always doing enough to win.

We are absolutely delighted for owner ​Semore Kurdi! 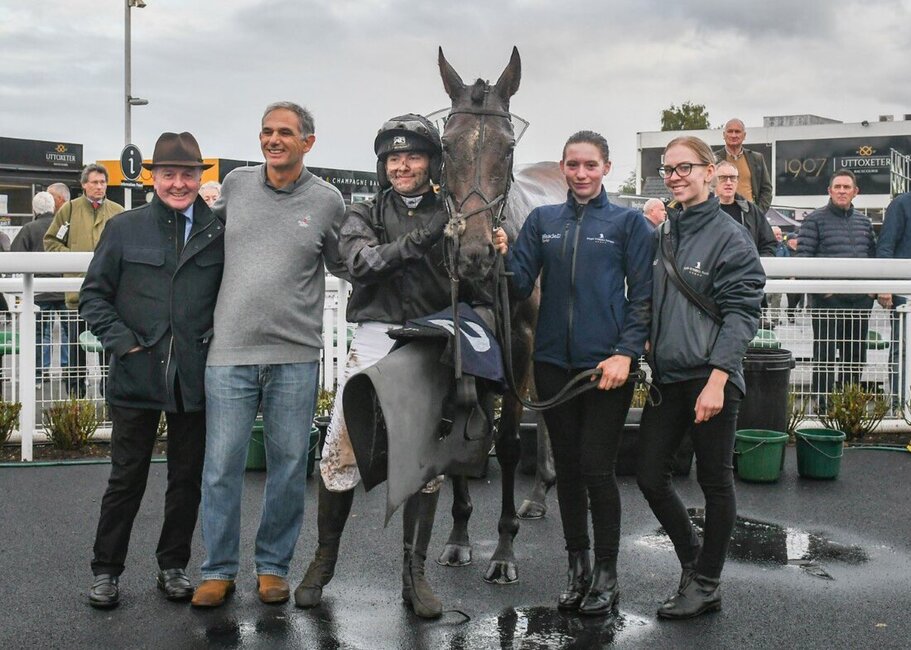 ​Gwennie May Boy caused a surprise at Bangor when winning at 80/1 in the hands of Kevin Brogan.

After sitting in midfield for the majority of the race, they made headway and pressed the leader before 3 out and soon went into the lead, going clear approaching the last and staying on strongly to the line.

We are absolutely delighted for Gwendoline and all the Clarke family! 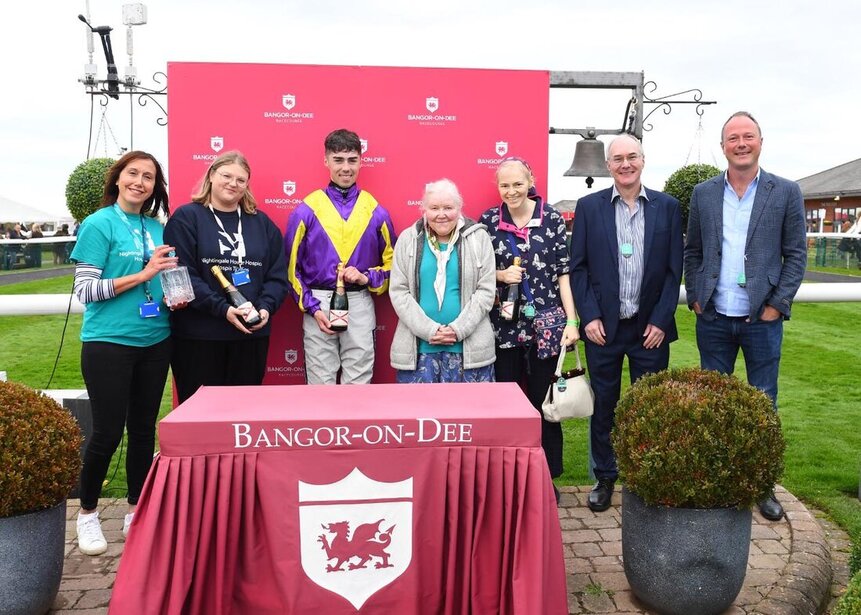 Biowavego and Jonjo Jr. brought up our 25th winner of the season at Worcester.

Always in touch with leaders, he was pushed along and was prominent after 4 out. They led narrowly 3 out and fought off all the challenges, staying on very well to win by  2¾ lengths. 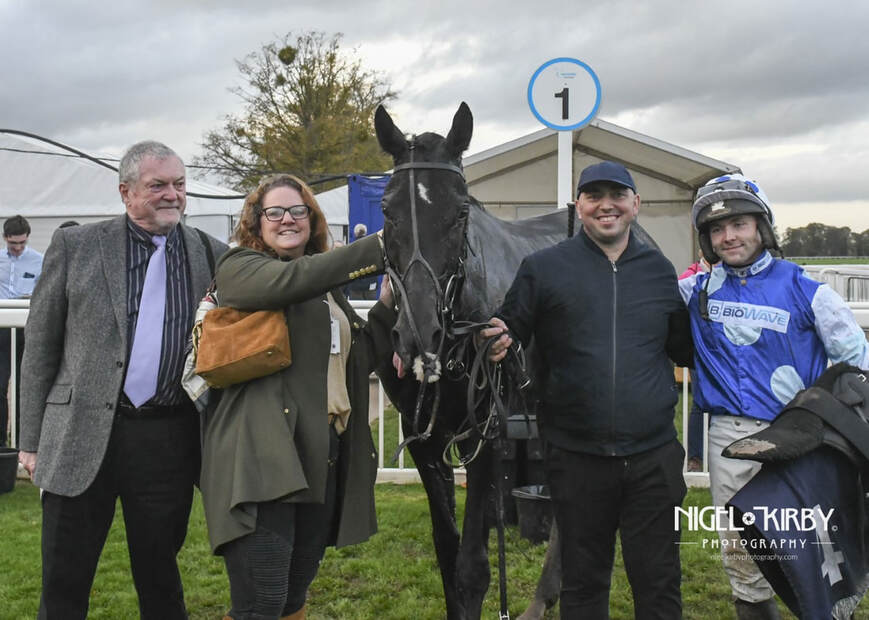 Biowavego with Graham, Kate, Gabby and Jonj in the Winner's Enclosure at Worcester

Iron Bridge put in a hugely impressive performance at Carlisle under a superb ride by Jonjo Jr.

​At the rear for much of the race, they started picking off their rivals one-by-one. They eventually led at the last and stayed on well to win by 8½ lengths.

Many congratulations to the ​Exors Of The Late Trevor Hemmings. 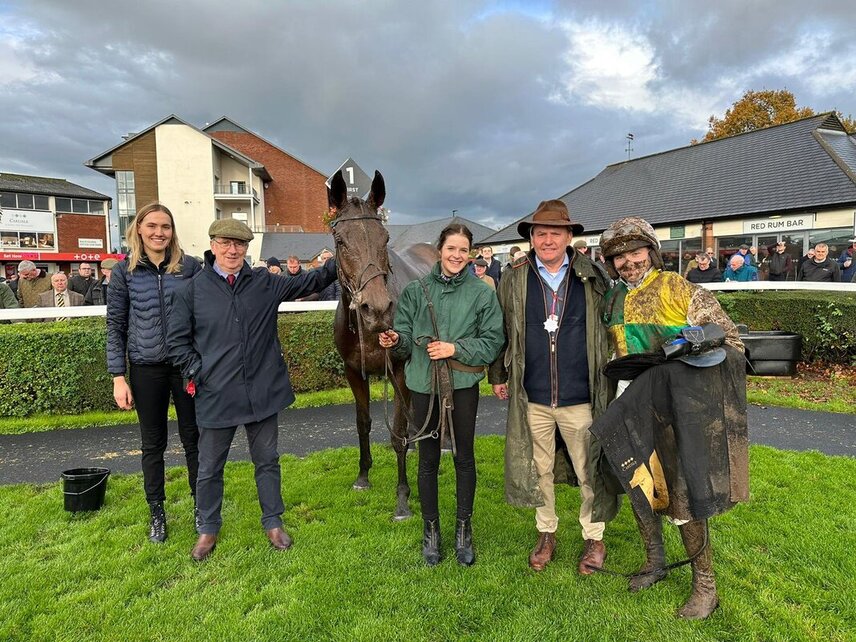 Manintheshadows and AJ produced a superb front-running ride to win the opener at Hereford.

After making all and setting a decent pace throughout, the pair faced a challenge around the bend leading into the home straight. They were one-length clear when approaching the last and were not fluent over it but stayed on well and were always doing enough to win well. 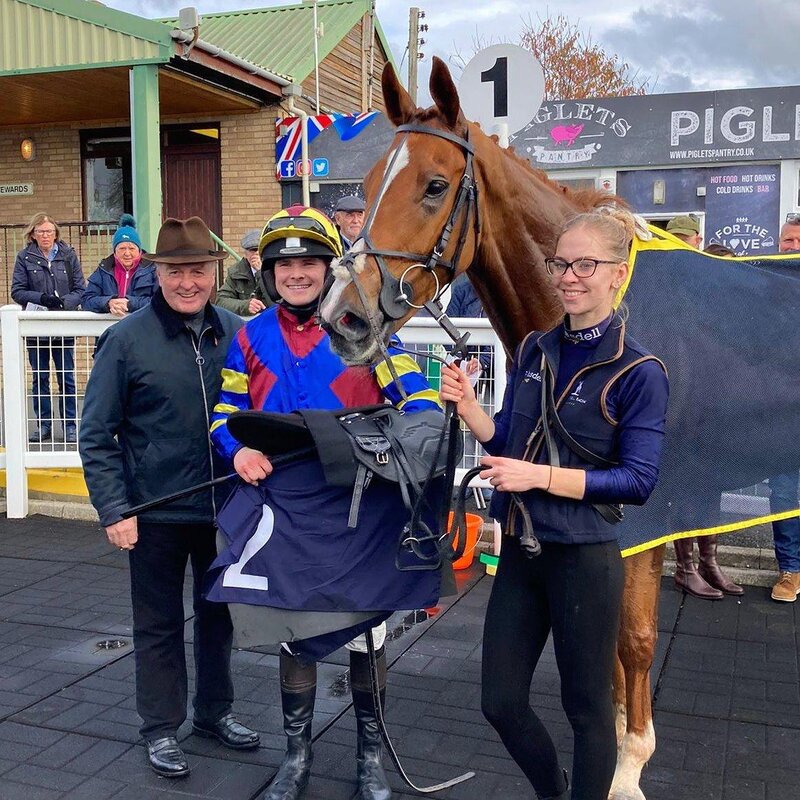 AN TAILLIUR WINS LEADING NOVICE HURDLER AT THE McCOY AWARDS

​We enjoyed a wonderful evening at The McCoy Awards with owners Pat and Nan Hickey as they collected the Leading Novice Hurdler award for their horse An Tailliur.

Pat and Nan are great friends and wonderfully loyal supporters of the team here at Jackdaws Castle, and it was lovely to be able to celebrate with them.

The story behind Gwennie May Boy's victory at Bangor has now be seen hundreds and thousands of times across the internet.

Gwendoline Clarke and her family fell in love with him on a stable tour to Jackdaws Castle and it was their dream to own a racehorse.

The wonderful interview after the race with Luke Harvey on Sky Sports has been shared all around the world and they have since done interviews with The Telegraph, had articles on the BBC and the Racing Post.

​You can see the interview with Luke below.

What a heart-warming interview! □

A delighted Gwendoline Clarke bought her first horse during lockdown, Gwennie May Boy, who wins on debut at 80/1!

Our Stable Tour featured in the Racing Post last week. It includes an interview with Jonjo and an insight to lots of the horses here at Jackdaws Castle.

If you have the Racing Post subscription, you can follow the link button. If not, we have included the article below. 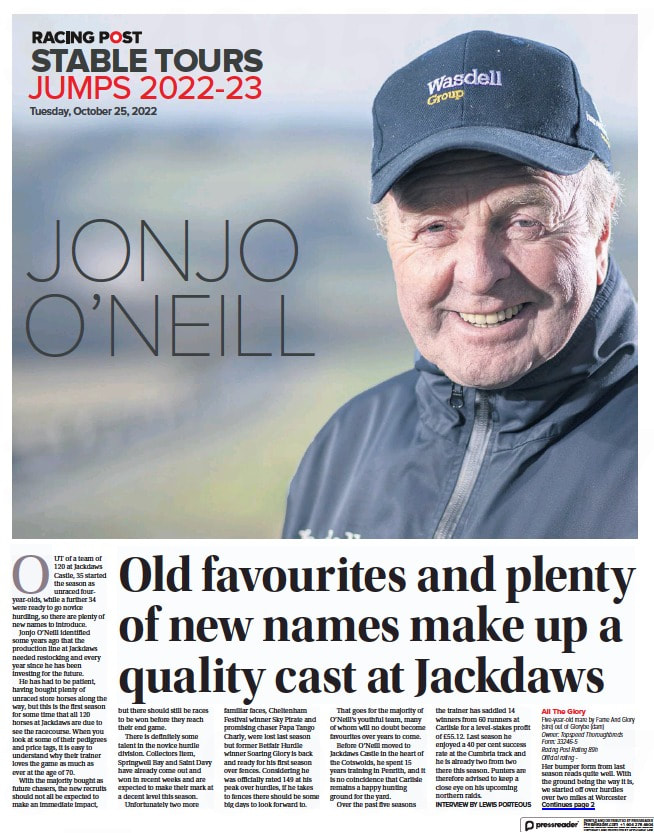 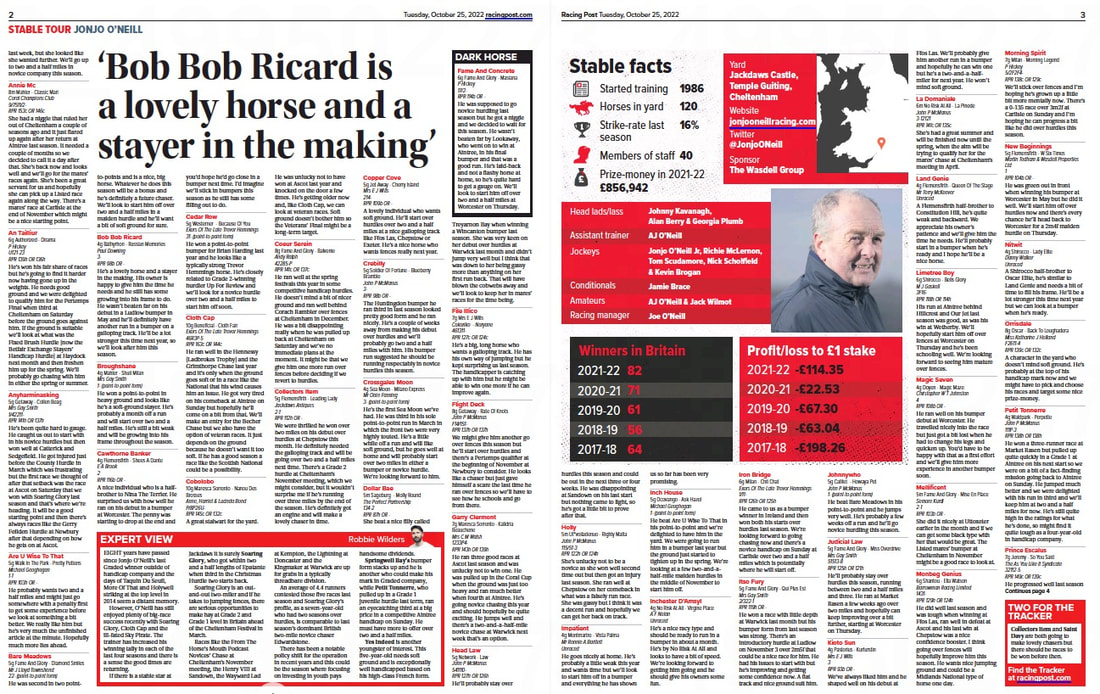 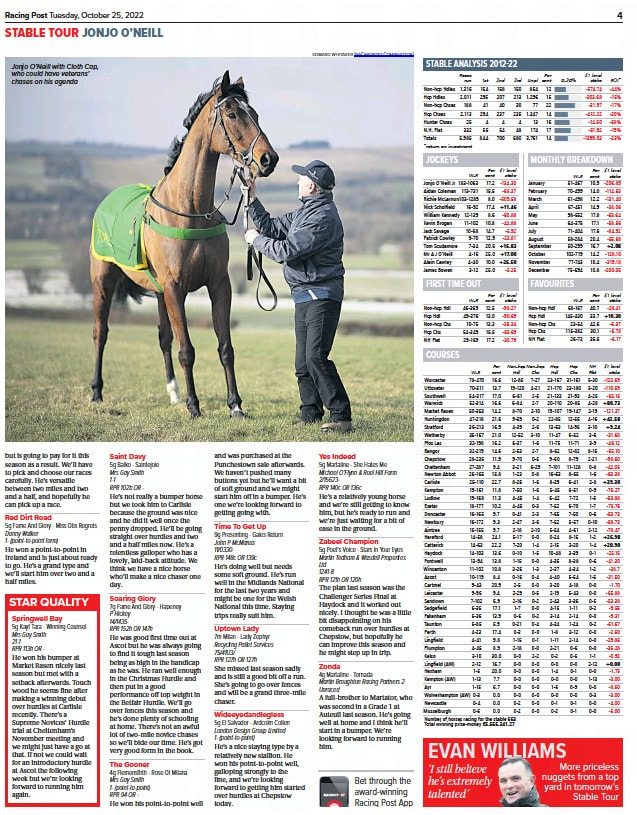 Many congratulations to Ben Macey who has been awarded our Employee of the Month for October.

Ben has been with us since August and has fitted into the team brilliantly. He has shown maturity around the yard way beyond his years and is a good rider and great with the horses.

What is you favourite thing about working at Jonjo O'Neill Racing?
The facilities here are amazing. I am also learning lots off the boss and schooling with all the jockeys which is amazing.

How did you get into racing?
I've hunted all my life and used to watch racing every weekend growing up. I absolutely loved it and wanted to give it a go. I worked at Evan Williams' for 3 years before moving to Jackdaws Castle

What is you best moment in racing so far?
Leading up Kioto Sun who finished third at Ffos Las and being able to ride some top horses every day.

Ambitions in racing
My aim is to one day become a professional Jockey. The dream is to become Champion Jockey. I will keep working hard and soaking up all the knowledge from Jonjo and the jockeys here and hopefully I can fulfill that dream. 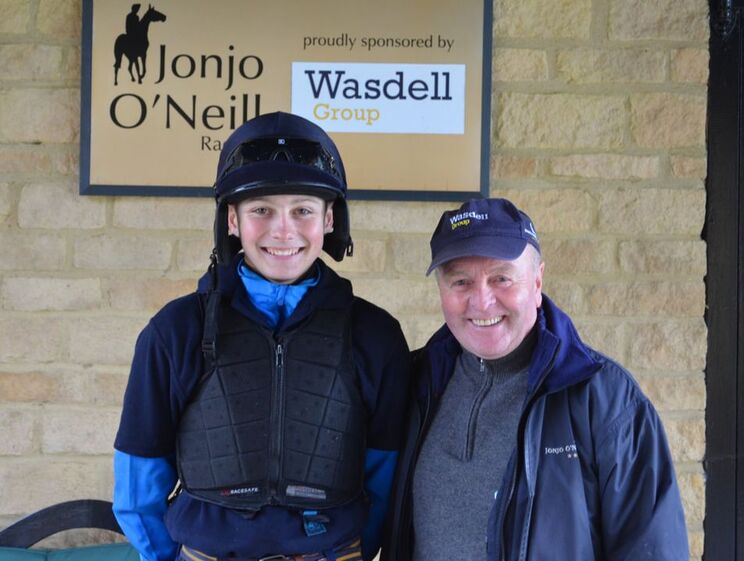 ​After the success of last year, The Great Jackdaws Bake Off returned for 2022.

The theme was animal cupcakes and it was Organised by Jojo and judged by our wonderful owner Lizzie Wills and her friend Tanya.

​The standard was absolutely incredible and a great night was had by all! 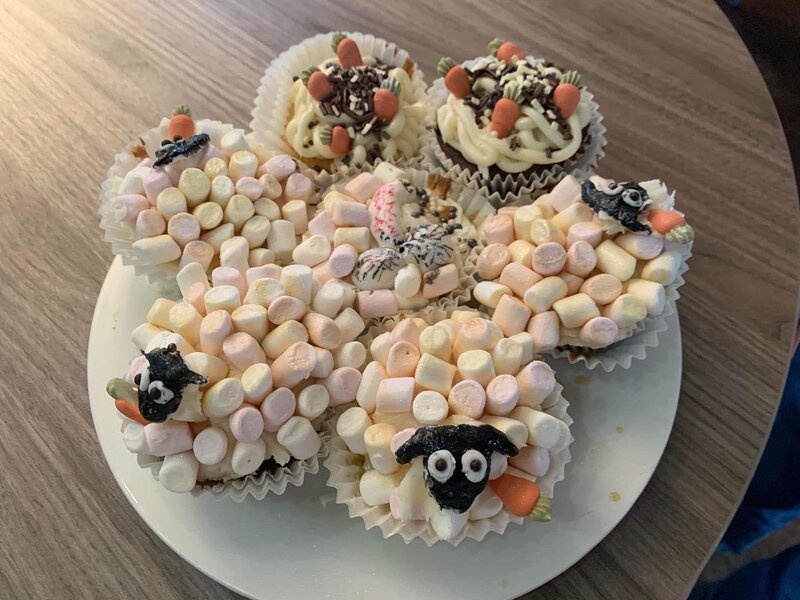 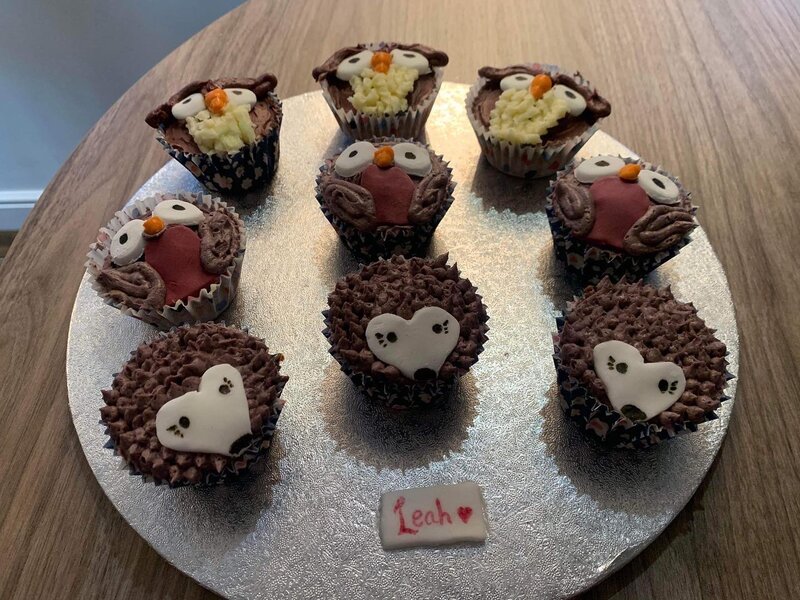 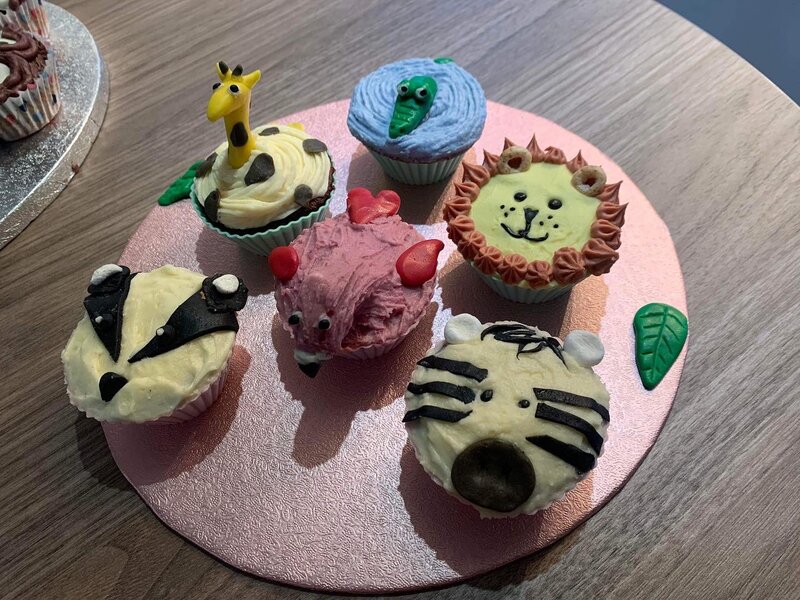 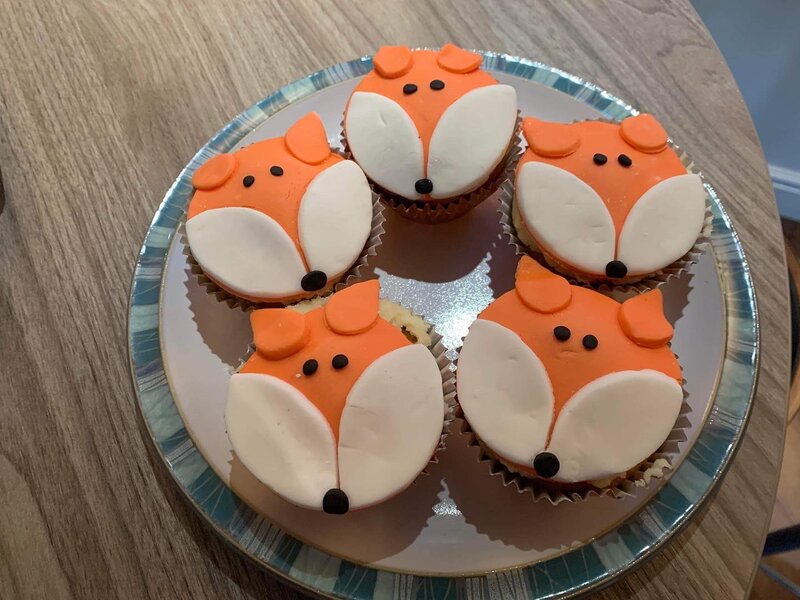 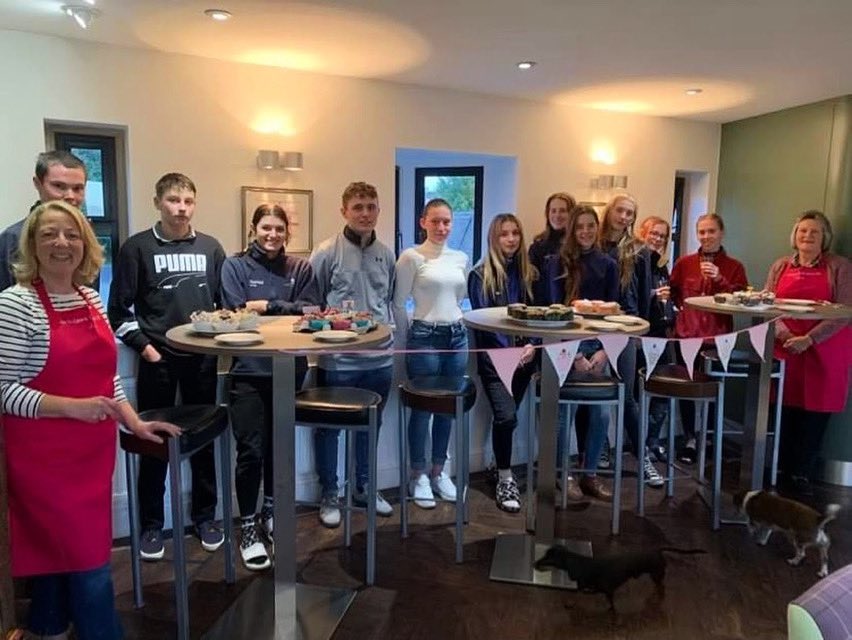 It was lovely to welcome owners from the Noel Fehily Racing Club to Jackdaws Castle to watch their horse Piper Tom.

​They enjoyed champagne and breakfast in the owners suite, before going out to see David Crosse ride Piper Tom on the gallops and watching horses swim.

It was a brilliant morning and we hope Piper Tom can continue the success of the racing club. 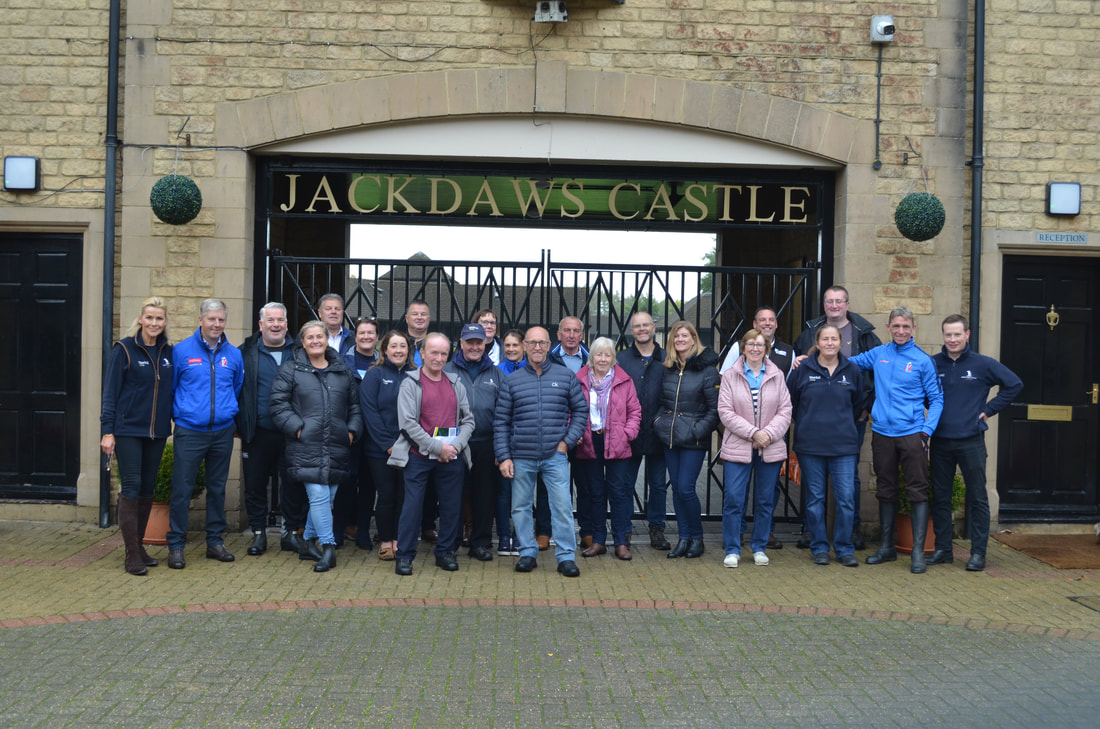 The leaves on the trees have changed colour and Jackdaws Castle is looking beautifully autumnal at the moment.

We have experienced some incredible sunrises too which you may have seen across our social media.

Here are some of our favourites. 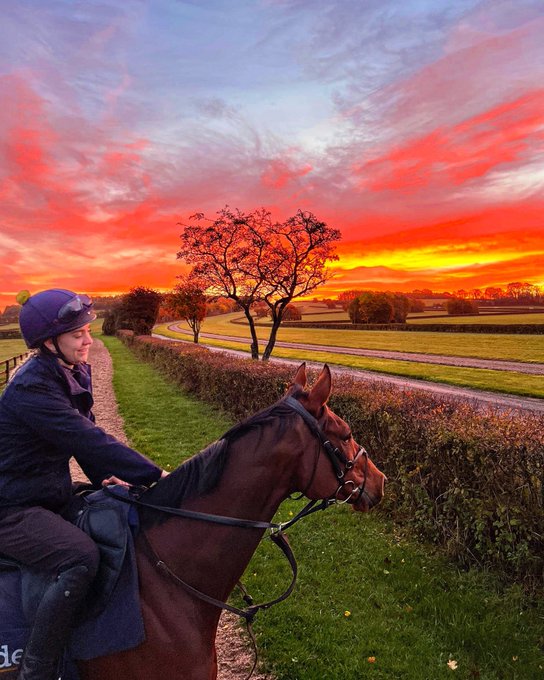 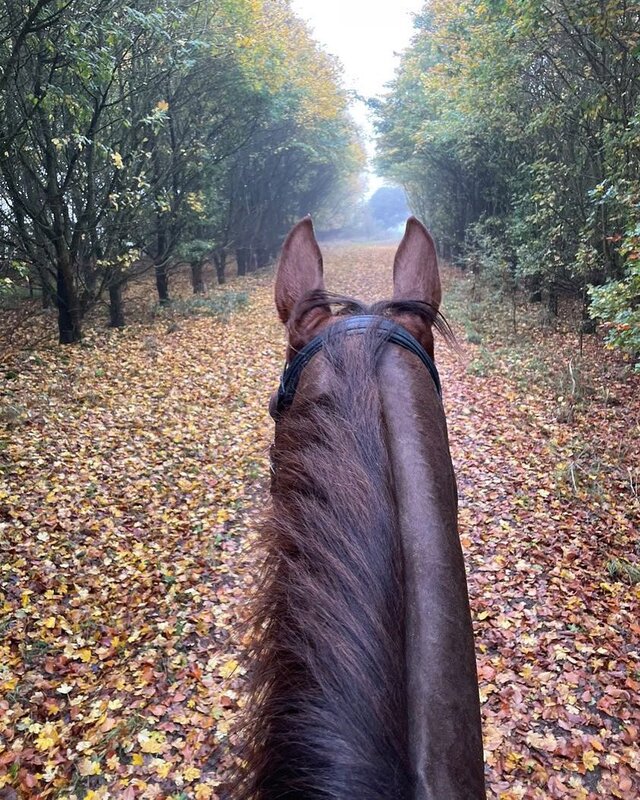 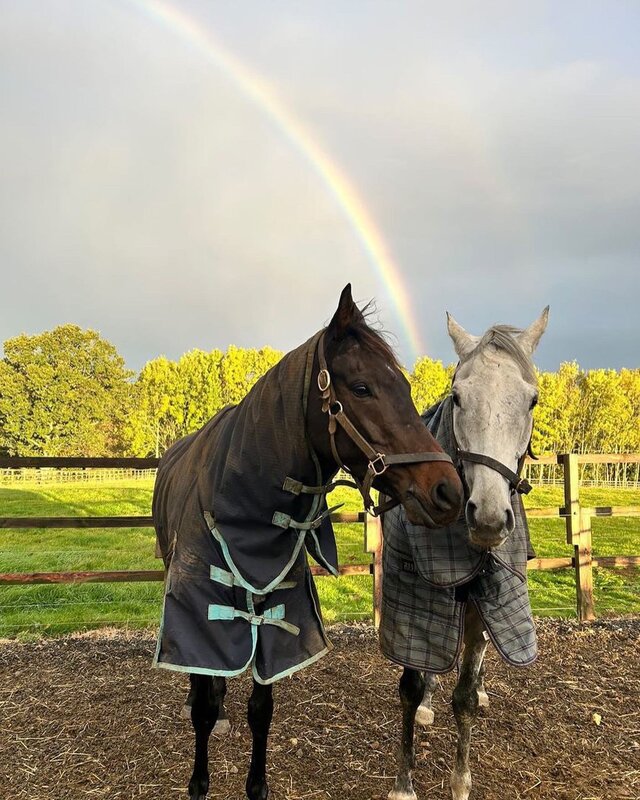 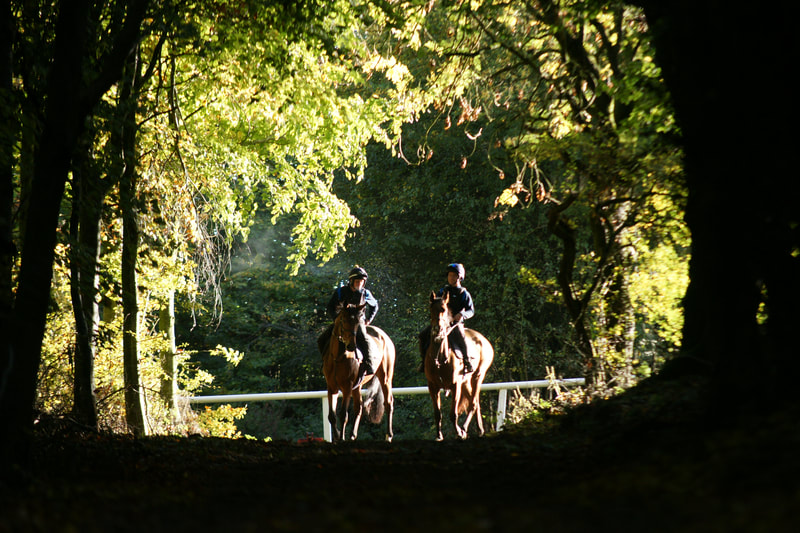 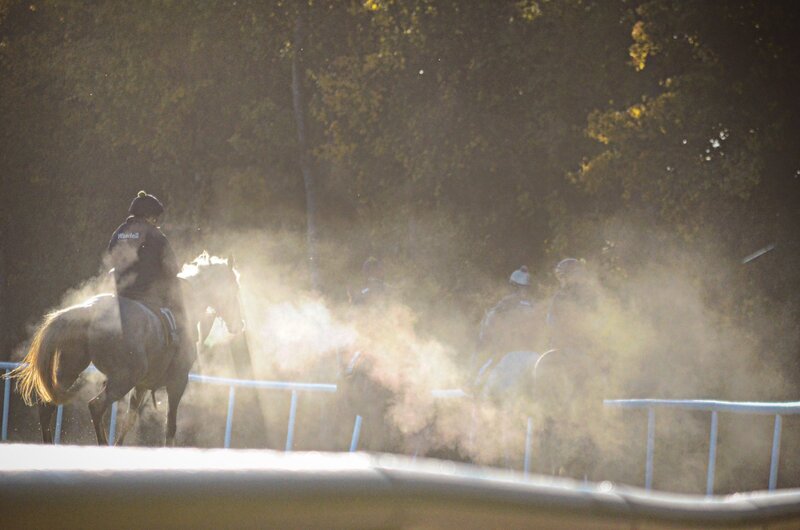 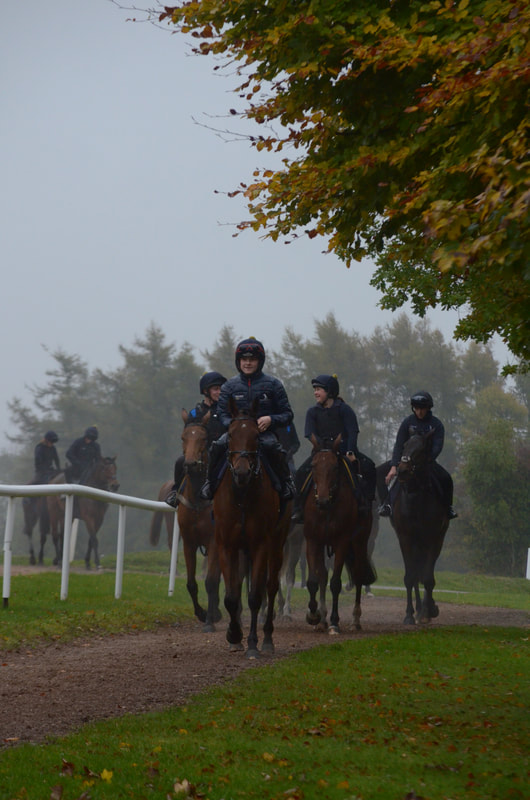 A huge happy October birthday to...