​
THE NATIONAL HUNT SEASON IS HERE!

​I think we have seen the last of the warm weather for a while, and although Stratford was sadly cancelled because of it on Monday, we have been happy to see some rain to soften up the ground.

The Chepstow meeting always marks the start of the National Hunt season and we have a few entries for both days. We're delighted to see our yard sponsor Wasdell sponsoring the Silver Trophy which you can read about below.

It was pleasing to pass the £100,000 in prize money last week.​ The horses are all healthy and running well - long may it continue!

With many runners all over the UK, it's extremely important to have a good team looking after the horses. I would like to give a special mention to my team who have driven lengths of the country to represent Jonjo O'Neill Racing at various racecourses. On that note, it was incredibly pleasing to receive this wonderful email below about Jojo and Georgia from Kelso last week;

"Hello,
Today, there was a race meeting at Kelso so I had your stable hands here on Saturday night, due to the Covid restrictions at the racecourse. They were two young women - Jo and Georgia. I have to report that they were delightful, impeccably mannered and totally focused on their horses. It was lovely to have them in the house. They are a credit to you yard.  People are often quick to criticise others and not too quick to praise. Please pass on my best to them both. I wish them well."

We work tirelessly to build a strong team here at Jackdaws Castle, and this makes it all worthwhile.

Please stay safe and well and here's to a fantastic National Hunt season!

It is great to see our yard sponsor Wasdell sponsoring the £40,000 Grade 3 Silver Trophy Handcap Hurdle at Chepstow this weekend.

The race is the feature event on Day Two of the Unibet Jump Season Opener at Chepstow on Saturday 10th October, the traditional start of the winter National Hunt season in Britain.

Over the years top class horses to have won the Silver Trophy including our very own Don’t Push It.

The Wasdell Group has expanded significantly in the eleven years since chairman Martin Tedham bought the core company. Now the biggest independent pharmaceutical contract packer in Europe, and an increasingly important player in the manufacture of pharmaceuticals, Wasdell employs 850 people at its headquarters in Swindon with further facilities in Newcastle, Wellingborough and a recently opened new-build factory in Dundalk, Republic of Ireland.

Martin said:”I am a huge supporter of jump racing and I am very pleased to sponsor the Silver Trophy, a competitive handicap hurdle run on the opening day of what everyone in racing treats as the start of the core winter jump season.” 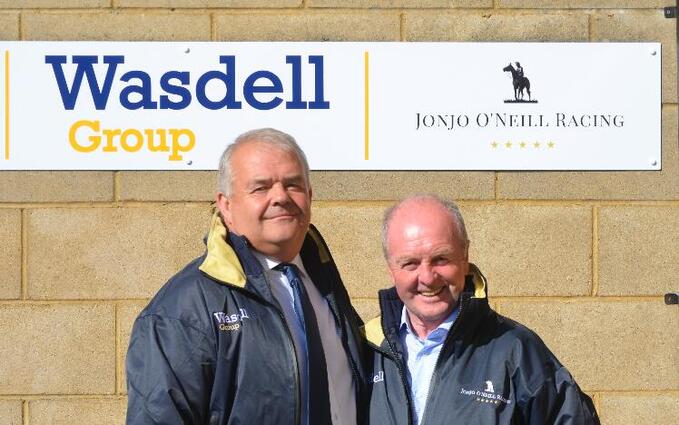 We enjoyed 6 winners throughout September. Huge congratulations to all the connections.

RED MAPLE WINS ON HIS DEBUT AT BANGOR

Red Maple produced an impressive debut to win the bumper at Bangor in the hands of Jonjo Jr.

Promising type – Red Maple has lovely staying pedigree and lands the @BangorRaces bumper on debut for @JJONeillJnr and @JonjoONeill pic.twitter.com/Hca2HhUat7

Lock's Corner made it 4 wins in a row with a convincing 8 length victory at Bangor in the hands of Richie McLernon. The JP McManus owned 6-year-old jumped well throughout and pulled away from his nearest rivals after the second last to win comfortably.

Apache Creek won the last race of the day at Perth in the hands of Jonjo Jr. Huge congratulations to Chris and Lesley, Tony and Anne, Steve and Sheila & David and Jenny of Team Tuff.

It was also great to see our groom Alex lead up a winner after recently recovering from appendicitis.

PRESENT CHIEF AND YOUNG WOLF BRING UP A DOUBLE AT WARWICK


Jonjo O'Neill Jr. produced two fine rides aboard Present Chief and Young Wolf to land us a double at Warwick.

This was followed up with an equally impressive performance by Young Wold who won the feature race in the colours of Mrs Gay Smith.

​Huge congratulations to all connections and well done to the team for all of their hard work.

HIS DREAM WINS HIS CHASE DEBUT AT PERTH

His Dream made an impressive winning debut over fences with an 8-length victory at Perth this afternoon for the Jackdaws Racing syndicate, under a good ride by Jonjo O'Neill Jr.

A huge congratulations to all the syndicate members!

A VISIT FROM OUR EQUINE PHYSIO

Our Equine Physio Marnie Malgarin visits Jackdaws Castle every week and treats the horses who have any issues and ones that have recently raced.

We have created a short film for you to see Marnie in action and find out more about what she does.

Congratulations to Jade Aspell who has been awarded our Employee of the Month for September.

Jade is our Racing Secretary, she makes all of our entries and declarations, organises all of the horse movements, liaises with owners, racecourses and suppliers daily to ensure everything runs smoothly. Jade also rides out in the first two lots before she starts her day!

We asked her a few questions so you can get to know her a little bit better.

How did you get into racing?
Both of my parents worked in racing and I started riding ponies before I could walk, I went to Noel Chance on work experience when I was 15 and have been in racing ever since.

How long have you been at Jonjo O'Neill Racing?
I have worked at Jackdaws since August 2019

What is your favourite part of the job?
Getting to combine riding out with working in the office means my role is very varied and interesting. The team at Jackdaws Castle are all great fun -working with nice people is always a bonus!!

What is you best moment in racing so far?
Having four group one winners at Randwick on the one day when I worked for Peter Moody in Australia

What do you hope to achieve?
I would love for the yard to win the Hennessy at Newbury, it’s my local racecourse and my favourite meeting of the year. 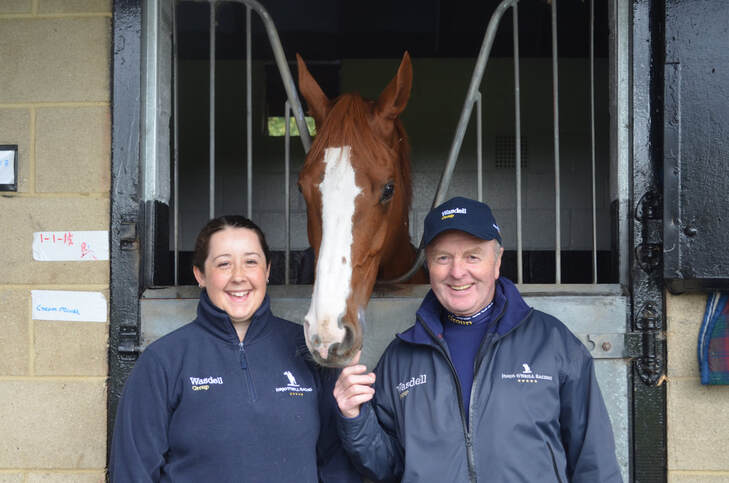 Jade and Jonjo with Pens Man

It was great to welcome Debbie Matthews to Jackdaws Castle this week, to mark Mental Health Day on Saturday 10th October.

​We here at Jonjo O'Neill Racing are glad to promote the awareness of mental health within the racing industry. 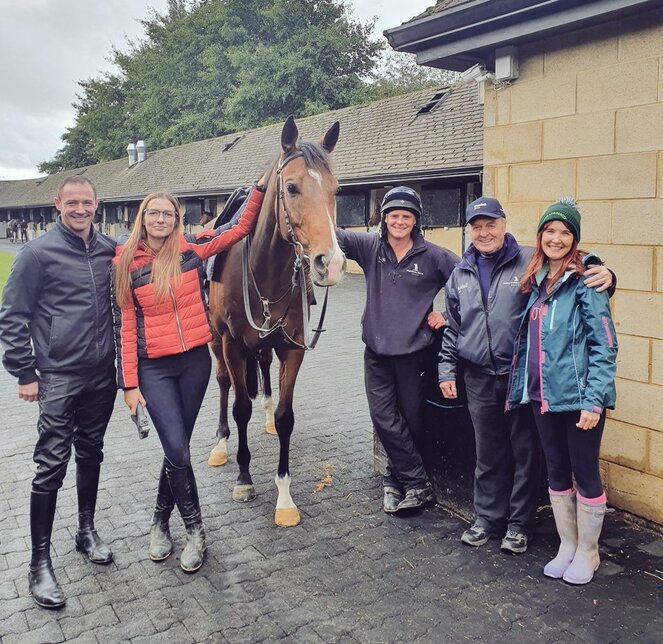 We are already looking forward to the Tattersalls "Autumn Horses in Training Sale" from 26th - 29th October that you can find HERE.

Please get in touch to see what we currently have for sale. 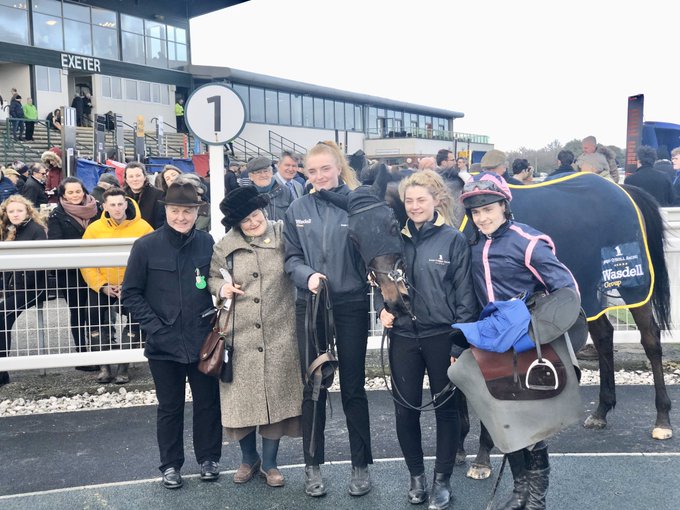 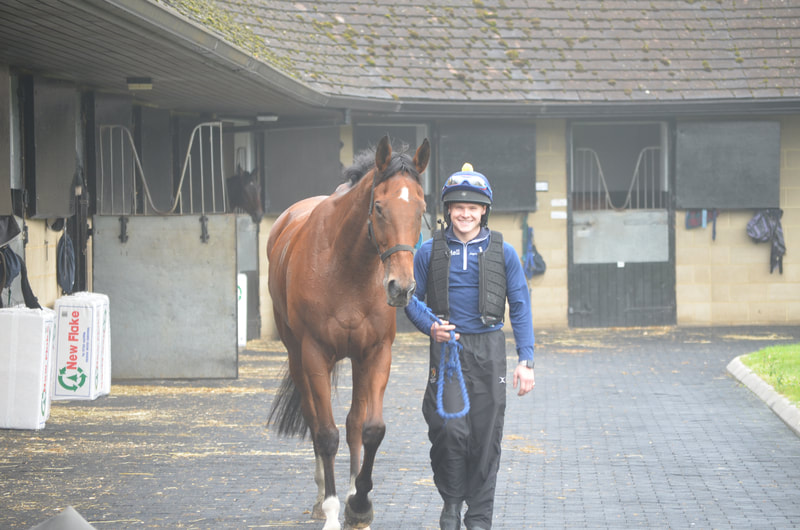 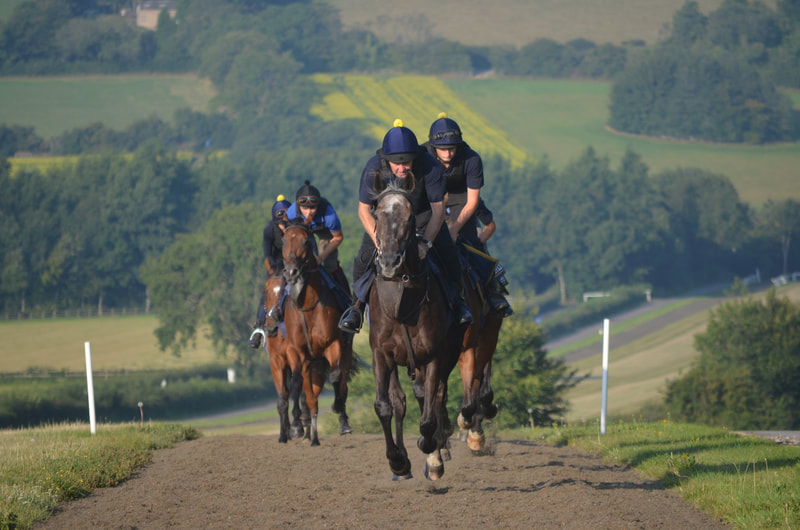 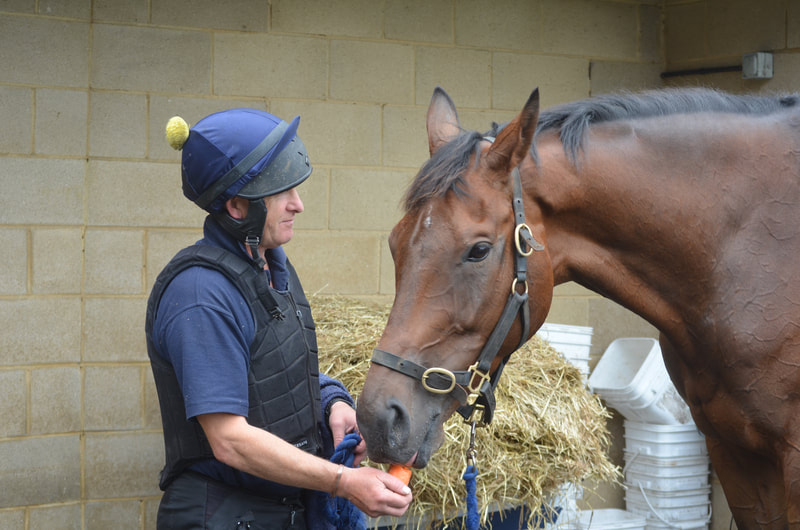 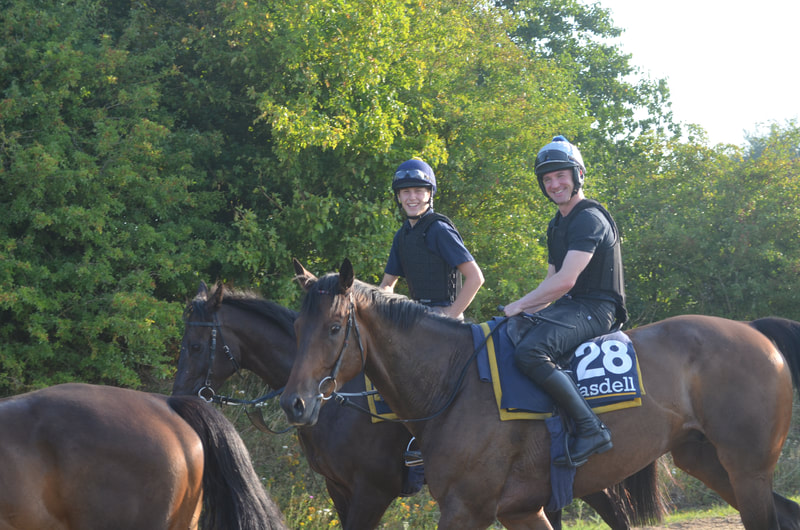 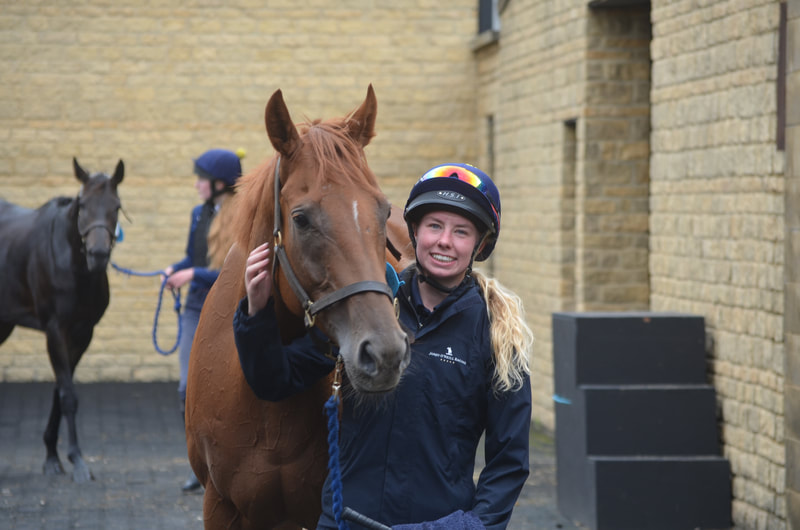 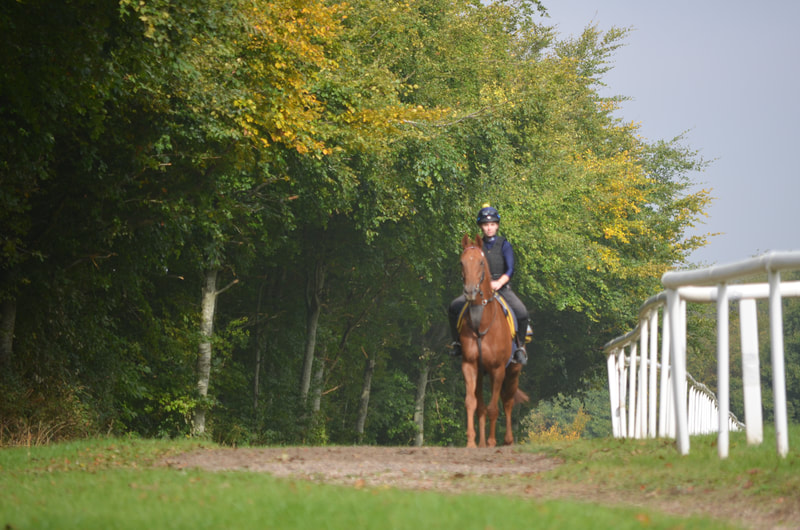 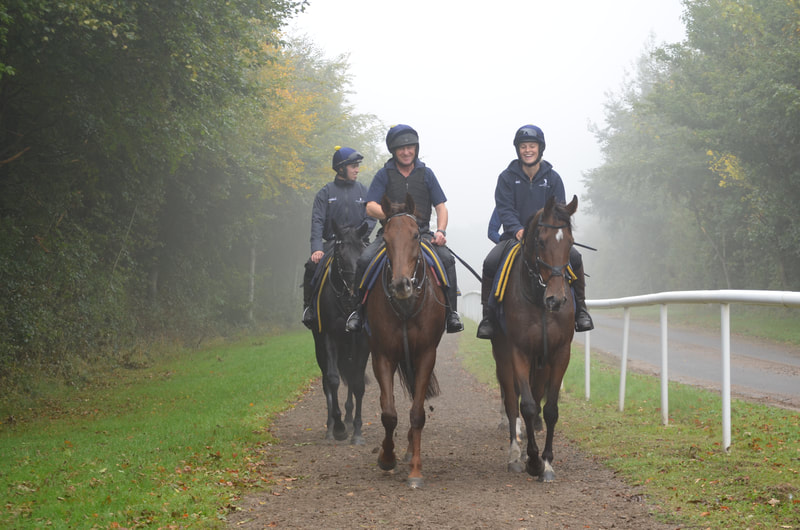 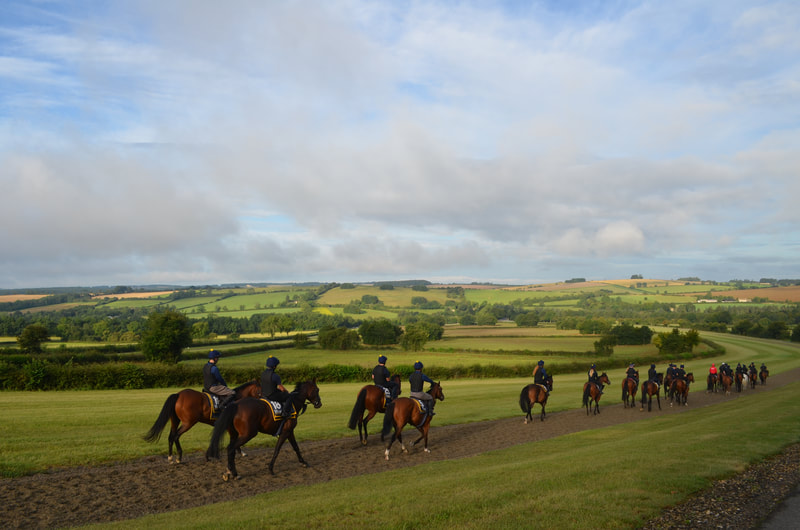 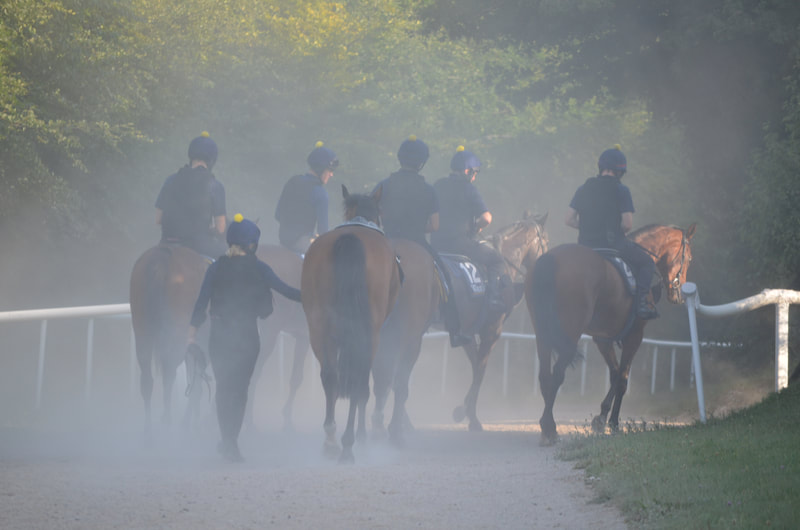 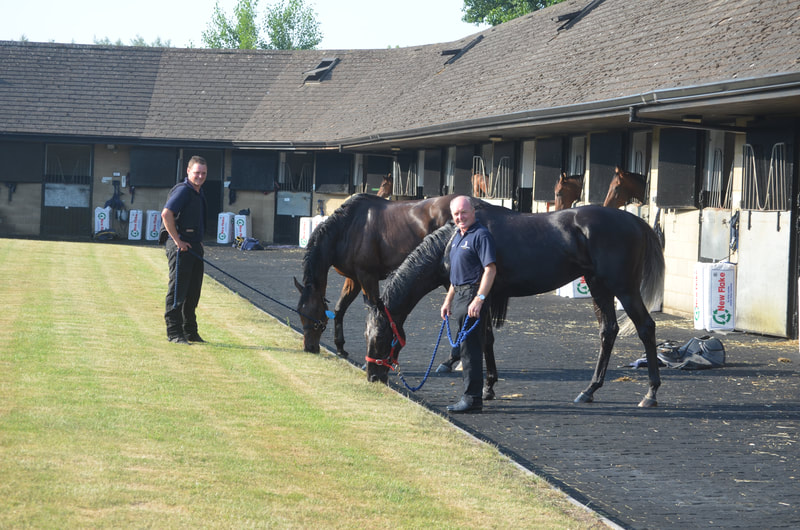 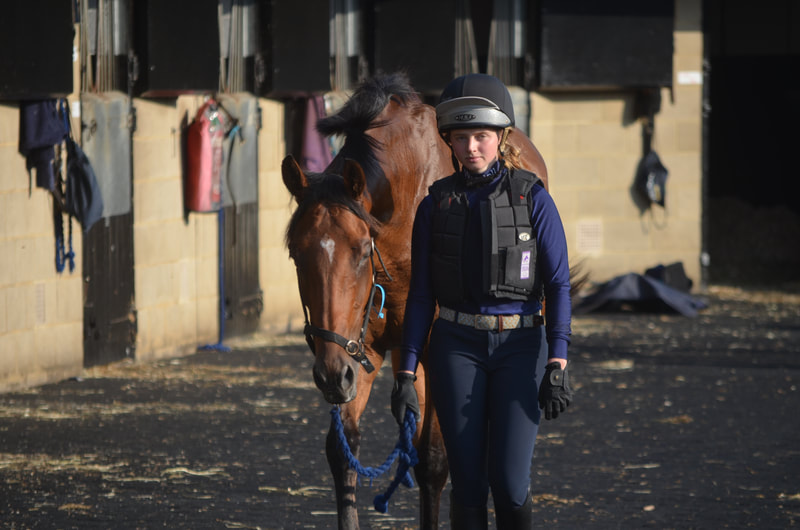 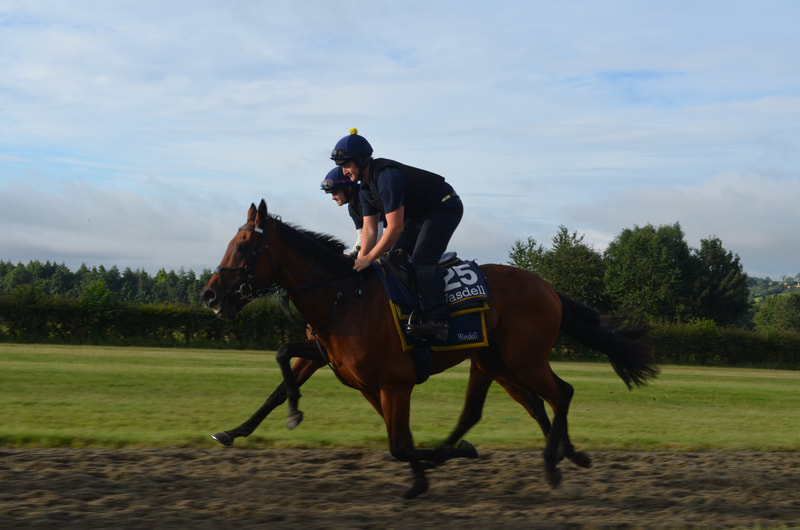 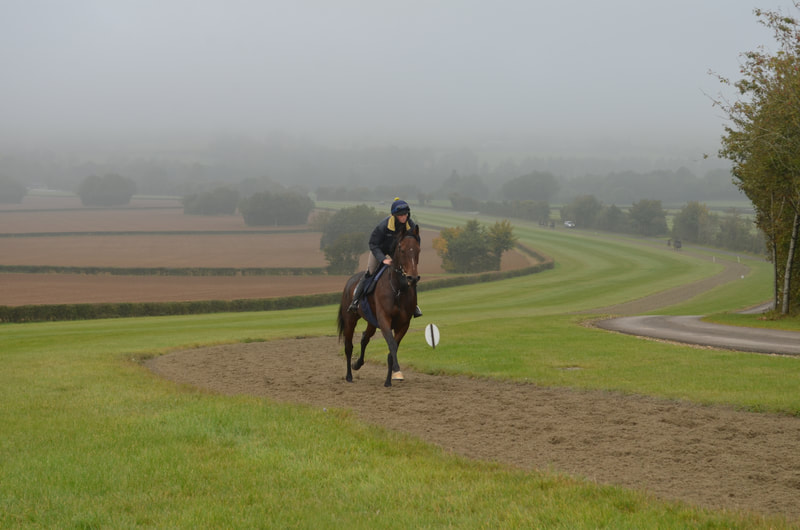 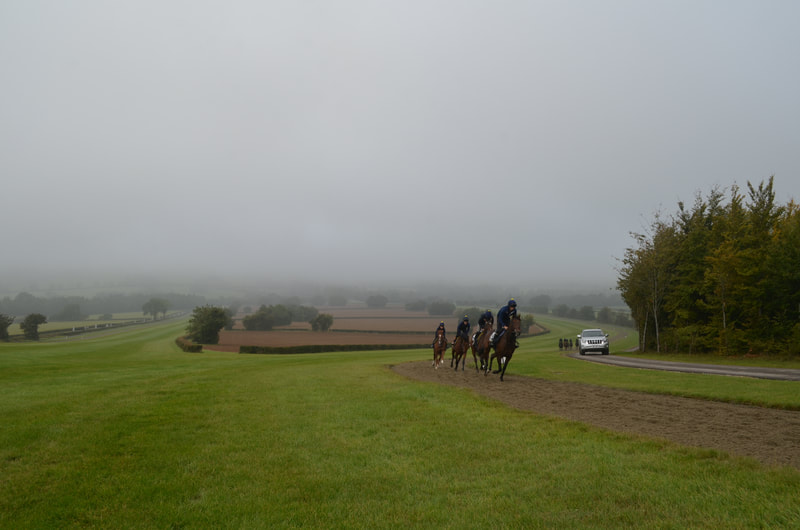 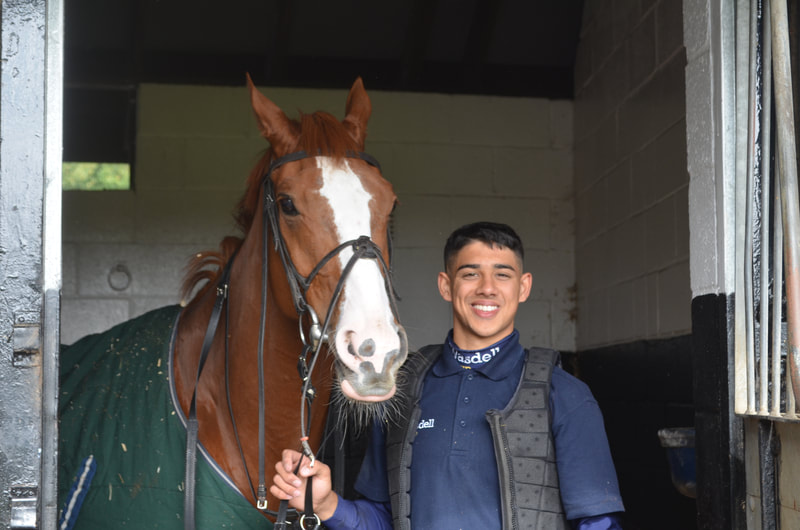 Here is a guide to all the National Hunt Jump Racing fixtures in October.

A huge October Happy Birthday to...

We are delighted to be partnered with the beautiful Lygon Arms in Broadway.

Why not come and see your horse, or what horses we have for sale here at Jackdaws Castle, and coincide it with an incredible stay at this stunning hotel while taking advantage of our great offer below?

Receive 20% off your stay when you book your Bed & Breakfast stay on a Sunday – Thursday at The Lygon Arms 31st July – 23rd December.  The offer is subject to availability and not valid in conjunction with any other offer or promotion.

To book your room or to find out more please, contact Erika Steward at The Lygon Arms  on 01386 852255 or email esteward@lygonarmshotel.co.uk.

We are doing our best to entertain you all on our social media channels sharing all sorts of things including quizzes, race replays and everything that is going on here at Jackdaws during the pandemic.

Please give us a follow on all of them if you're not already! Here are all the links.