​It is great to see the winners rolling in again as we enter March!

Seaton Carew, who had shown lots of promise on her debut when fifth at Warwick last November, confirmed that impression at Wetherby when
comfortably winning her bumper a couple of weeks ago.

Well done to Jon and Julia Aisbitt whose daughter of Getaway (the sire of the high class Champion Hurdle contender Verdana Blue) has hugely enhanced her value now, being from the family of both Wichita Lineman and Rhinestone Cowboy.

Quarenta won for the second time this season at Warwick for Martin, Jocelyn and Steve Broughton and has gone up a reasonable 5lb for that. More recently, Ey Up Rocky stormed home at Newbury for Martyn and Elaine Booth.
Jonjo admits: “Since Christmas, the horses have been below par and not finishing their races. We checked the bloods and they were ok, and they were scoping ok too, but they were not right and we couldn’t find out what was wrong. But they seem to be getting back to themselves, now. The sings are encouraging!”

Of course Cheltenham is here and we look forward to welcoming our owners either at Jackdaws or at the meeting itself.

With 26 Cheltenham Festival winners so far, Jonjo sits in a share of eighth place in the all-time list, alongside Tom “Arkle” Dreaper. One more and he will equal Fred Rimell, two more and he joins Fred Winter.

Jonjo drew level with Mr Dreaper when Minella Rocco won the NH Chase back in 2016. So, who better to lead the Cheltenham team into battle than Minella Rocco in the Ultima Handicap Chase on the opening day?

The former Gold Cup runner-up has, at last, been given a chance by the assessor and it means that a go at the Grand National is now very much the plan.

“He needed the run more than I thought he would in the Cotswold Chase,” reports Jonjo, “but I was happy with his performance over hurdles at Exeter. He will need  to run well at Cheltenham to put up a good show at Aintree.

“It’s a very hot race, the Ultima – more like a Gold Cup in that there will not be much of a weight difference between the runners.  He is grand form, though, and you would like to see him coming home up the hill. We know he gets the four miles, of course, and normally, he’s a pretty good jumper”

Jonjo has won the notoriously competitive Pertemps Final, on day two, four times before, with Danny Connors in 1991, Inching Closer in 2003, Creon in 2004 and Holywell in 2013.

However, Aspen Colorado sits at number 31 in the weights and may not get in. Jonjo reported: “He won a couple earlier in the season but has had two disappointing races since and wasn’t right, like a few of ours. There’s a lot of luck needed in that race.”

Sky Pirate looks poised to run a big one in the Fulke Walwyn Kim Muir Challenge Cup for amateur riders on Thursday.

There is no question that Sky Pirate was travelling well for Patrick Mullins when falling two out on the Old Course in November. Young Mr Mullins has made it known he would be available again – so long as his father, Willie, is not represented.

The good news for Jonjo is that both Mullins entries, Livelovelaugh and Polidam, have plenty of options elsewhere.

Jonjo admits: “He was going to go close last time and it would be nice if Patrick could ride as he knows him, obviously. He will run a nice race, hopefully.

“At Exeter two weeks ago, he probably needed the run a bit more than I thought at the time, but it should bring him on.”

Champagne At Tara, who sits at no 29 in the handicap, is a possible for the Johnny Henderson Grand Annual Chase on Gold Cup day but he would need to return to the sort of form he was in much earlier in the campaign when winning at Aintree and Uttoxeter.

Jonjo is under no illusions: “He would be good runner although I think the handicapper has got him in his grip.”

So, expectations for next week are at a “medium” level but even if the chance to join Mr Rimell or even Mr Winter is postponed until later, there are still plenty of good prizes left to consider, starting at Aintree next month and then beyond.

Either way, there is no better place to start a day at the Festival than a visit to Jackdaws Castle, which will host the usual busy mornings with owners coming in for a glass of champagne over breakfast.

Good luck to all of our owners with runners next week, whether at Cheltenham or elsewhere.

​We are delighted to be hosting the Alan Brazil Sports Breakfast this morning here at Jackdaws Castle.

​​We were delighted to welcome the Cheltenham Club to Jackdaws Castle for a fresh morning on the gallops recently.

The evening before a preview night was held at The Ellenborough Park Hotel exclusively for Cheltenham Club Members. The evening was hosted by Mike Cattermole, with Sir A P McCoy, Oliver Sherwood, Jonjo Snr and Jonjo Jr. talking through probable Festival runners. It was a great evening and everyone enjoyed themselves.

​The following morning Guests had an exclusive behind the scenes tour of our yard, the equine facilities including the spa and swimming pool.  The group braved the weather to watch the horses working up the Long Gallop then came back the the Owners Suite for a well earned breakfast and chat with Jonjo. 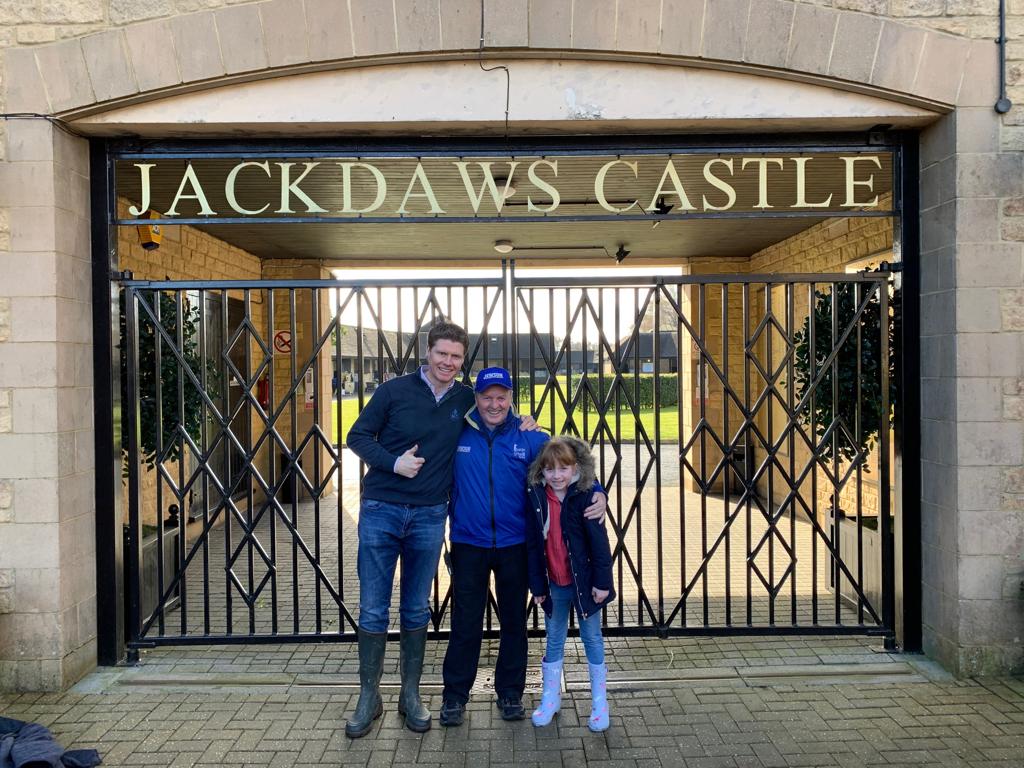 Ahead of the Sales at the Cheltenham Festival on Thursday 14th March (after the last race) please find a link to view the online sales catalogue.

There are some very exciting lots!  This is where we bought Minella Rocco a few years ago.  If there is any interest in being in a partnership or owning a share please email us or call 07767 480444.
SALES CATALOGUE

If you would like to get in touch and find out more about getting into racehorse ownership please call us on 01386 584 209 or email reception@jonjooneillracing.com