A top 20 finish in the Trainers Championship last season, with over 50 winners and prize money in excess of £600k,  gave Jonjo and the Team here at Jackdaws Castle a sound base from which to continue the exciting, rebuilding which has been taking place over the last 12 months. With the retirement of quite a few of our established equine stars, there has been a requirement to restock the yard with new equine talent and the team have been busy over the season sourcing and securing what we hope will be the stars of the future.

Jonjo’s policy of investing in young unexposed stock has already been rewarded as he strives to find the best possible horses for our supportive group of existing owners, who have been joined by an ever increasing number of new owners and partnerships who are new to Jackdaws Castle and in quite a few cases new to the sport itself. This is a really exciting time for everyone involved with Jonjo O’Neill Racing and the start of the new season could not come quickly enough for us, with winners already on the board, including a double at Stratford, this season promises to be better than ever. Whilst we have a huge number of horses enjoying their summer break, including a lot of youngsters who will make their racecourse debuts later in the year, the yard will be kept busy with our team of summer jumpers and of course our increasing number of Flat horses. It was great to see our first 2-yr-old of the season, Imperial Command make his debut at Windsor recently under champion jockey Silvestre De Sousa and finish an eye catching 4th.

Looking back at last season over jumps, Jonjo highlighted a number of performances that were particularly pleasing, none more so than Annie Mc’s impressive win in the EBF Mares Final at Newbury, she had been bought at the Cheltenham May sales for £20k for new owners the Coral Champions Club with that target in mind, it is great when a plan comes off and she is an exciting young talent to have in the yard.

Sunday 18th November was another landmark day as Palmers Hill gave Jonjo Jr. his first Cheltenham winner in impressive style coming away from a 23 runner field. A small setback has meant we will not see him again until later this season but he is another youngster to look forward to for owner JP McManus.

Another long term supporter is Trevor Hemmings who loves his long distance staying chasers and in Cloth Cap he has another potential star, his two chase wins were followed by an excellent 3rd place in the Coral Scottish National and he is an exciting chaser for the season ahead.

​Django Django is another exciting young horse for the future after his victory in the £50k Challenger Series Stayers Hurdle Final at Haydock Park for Martin Broughton & Friends, chasing is very much on his agenda for this season.

A walk around the paddocks with Jonjo here at Jackdaws Castle and observing all the youngsters enjoying the spring grass bodes very well for the future. Jonjo believes he has his best young team ever which will stand us in very good stead for the years ahead, not that we will be resting on our laurels. The sales come thick and fast at this time of the year and Jonjo has orders to fill, hoping he will find our next Gold Cup or Grand National winner.

The new season is well underway and we are very pleased with the way all of the horses are running with 5 winners already.

Jonjo Jr. is in cracking form with 4 wins from his last 6 rides. Let's hope it continues throughout the summer. 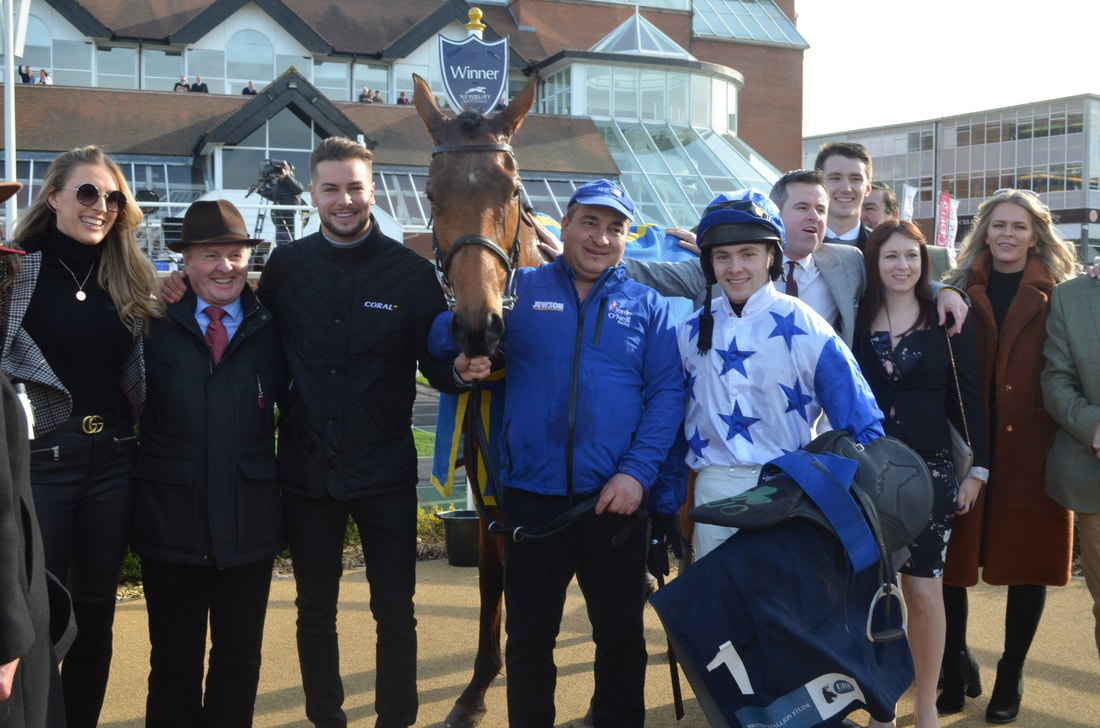 ANNIE MC AFTER WINNING AT NEWBURY

How did I get into horse-racing?

I went to Tattersalls in Newmarket: I knew absolutely nothing about horse-racing or horses. A grey horse named High Kick came into the ring. Every time he came round the ring he stopped in front of me. The man in the ring would move him on but he would stop in front of me. So, I bought him. I was asked what the vet had said about the horse: I didn’t even know that you were supposed to have a horse vetted.

I gave the horse to Richard Fahey to train. We ran him first at Musselburgh where he won at 33 to 1: first horse, first race, first winner and first big bet! That started the journey.....

I had horses with Andy Turnell and other trainers but due to illness five years ago (I broke my neck and was told I would never walk again) I gave all the horses away. Following surgery I have regained strength in my body and decided I would once again get into racing. I had always wanted to have horses with Jonjo, having found him to be kind and polite when I met him at the races. I sent him a couple of horses and then asked him to find me another. Several months passed until one day he ‘phoned me and asked if we could go to Ireland to look at some. We went over and back in the one day and saw about fifty, but only two of them really impressed me. We bought one of them that day (Wasdell Dundalk) and successfully bid on the other (Papa Tango Charley) at the recent Grand National sale at Aintree. I have a 50pence bet with Jonjo that Wasdell Dundalk will prove the better of the two. We will wait and see for the outcome at the end of next season.

Tedham, Wasdell Dundalk and Papa Tango Charley will be my three horses for the 2019/20 campaign. I am looking forward to the new season with renewed optimism for all the innovations Jonjo is implementing.

I use my horses to get my companies’ names out there and to entertain my customers. I have great times at Jackdaws Castle and enjoy meeting all the friendly people who, like me, have been attracted there. I admire the attention to detail, the friendliness of the staff, the immaculate way the place is presented and the very high level of stable management.

Yes, I will be buying more horses and Jonjo will be training them.

EXPERIENCE THE SALES WITH JONJO

The buzz of the sales ring is like nothing else.

We invite existing and new owners to join us at the sales.

Enjoy a glass of champagne while viewing the equine entries, before travelling to the sales ring to view the horses for sale with Jonjo.

​Lots of the winter jumpers are enjoying a well deserved break in the paddocks here at Jackdaws Castle. We will start bringing them in at the start of July to get them fit for the winter campaign ahead.

Congratulations to Lauren Hay who was awarded our Employee of the Month. She is a huge valued member of the team who has recently started driving our two-horse boxes to the races.

Lauren wins a spa visit for 2 at the wonderful Lygon Arms in Broadway. Thanks again to The Lygon Arms for sponsoring this, it is a great way to thank our hard working team. 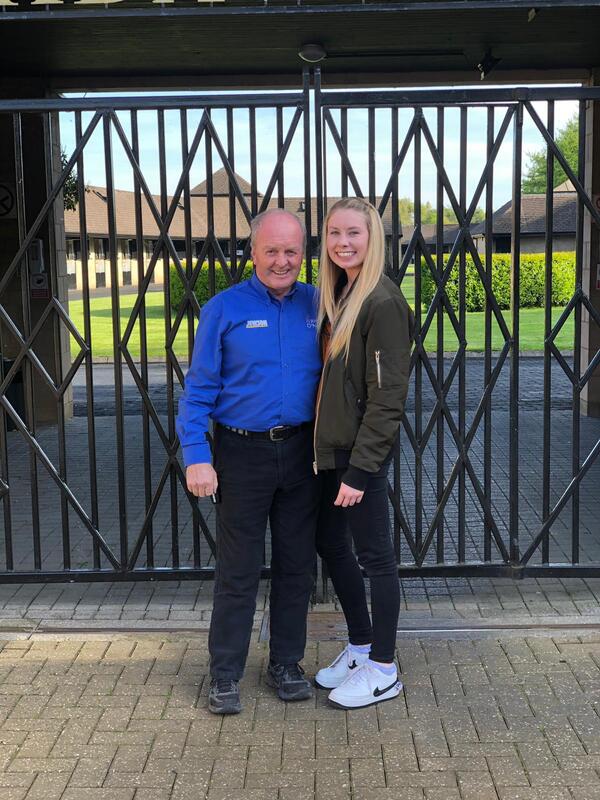 If you would like to get in touch and find out more about getting involved in racehorse ownership please call us on 01386 584 209 or email racingoffice@jonjooneillracing.com.

If you would like to unsubscribe from receiving these emails, please fill in the contact form below