​
THE EVE OF THE FESTIVAL

​Can you believe The Festival is just around the corner? It doesn't seem 5 minutes ago when we were preparing for last year's meeting. Sadly, this year, we won't be entertaining any of our wonderful owners here at Jackdaws Castle, but at least there is now light at the end of this very long tunnel.

It will be strange without a crowd at Cheltenham and the roar that rings out around the racecourse at the start of each day, but the racing will still be of the highest quality.

February was a funny month with lots of meetings being cancelled; however it was great for us that the Betfair Hurdle was pushed back to Sunday 21st and we were all absolutely delighted with Soaring Glory winning so well. The race was his target all season and it's great when it comes off. I'm just thrilled for Pat and Nan Hickey

The month started well with a brilliant double at Warwick where both Annie Mc and Uptown Lady both put in impressive performances.

Time To Get Up won well at Wincanton and now has a couple of options; in the Kim Muir at Cheltenham or in the Midlands National next weekend.

​Pressure Sensitive made it 2 out of 2 in bumpers in good style at Wetherby and Theme Tune got up to win at Carlisle.

I am very happy with how all the horses are running.

​It was brilliant to see Cloth Cap win so well at Kelso last weekend. It's now all systems go for the Grand National and we go there very hopeful. It will be incredible if we could get a National winner for Trevor Hemmings as the race is very special to him.

The eyes of the have world fallen upon racing for all the wrong reasons in recent weeks. As all of our owners know, the welfare of the horses here at Jackdaws is paramount to everything we do. Without them at their happiest and in the best condition they possibly can be, we wouldn't be able to do what we do. It was sad to see that photograph circulating, but we all need to remember that this type of thing is extremely rare and should never happen.

With the sun now shining a little more, a clear route out of this pandemic is now in the public domain and everything feels a little bit brighter.

A double for the girls at Warwick

Uptown Lady and Annie Mc brought up a brilliant double at Warwick.

40/1 shot Uptown Lady tracked the leaders throughout the race and went clear after Fantastic Lady and Nico de Boinville fell at the last (both horse and jockey were up ok) and won by 14 lengths in the hands of Jonjo Jr.

Annie Mc once again put in an incredible performance to win the Listed Mares' Chase under a brilliant and composed ride by Jonjo Jr.

Many congratulations to Chris, Simon, Paul and all of the Coral Champions Club

Time To Get Up gets up to win at Wincanton

Time To Get Up struck late to win the Dick Hunt Handicap Chase at Wincanton in the hands of Jonjo Jr.

The 8-year-old tracked the leaders, jumped well into the lead 2-out and stayed on strongly in the finish to complete a 5 length victory in the green and gold hoops of JP McManus.

Pressure Sensitive defied a penalty to stay unbeaten in bumpers this season at Wetherby.

Jonjo Jr. cruised to the front and won impressively by 2¾ lengths.

Soaring Glory and Jonjo Jr. put on a magnificent display to claim victory in the £125,000 Betfair Hurdle at Newbury this afternoon.

He travelled beautifully throughout and powered to a 3-length victory.

We are all absolutely thrilled for owners Pat and Nan Hickey.

Well done to all of the team. 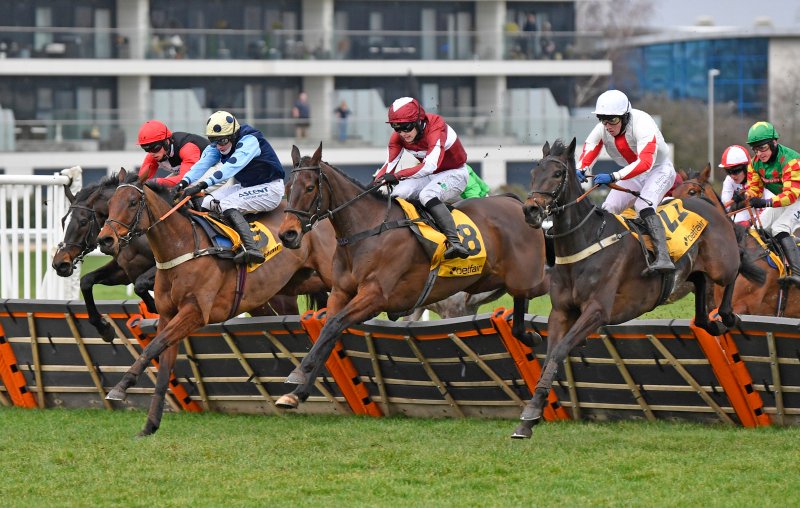 Theme Tune followed up his win at Ludlow last month with victory at Carlisle under a superb ride from Jonjo O'Neill Jr.

This brings up our 60th winner over obstacles for the season.

Many congratulations to owner Trevor Hemmings.

We go to Cheltenham next week quite hopeful. We know things will have to go our way but we are keeping everything crossed for a good week.
​
​​Soaring Glory

We were delighted with the way Soaring Glory won the Betfair Hurdle at Newbury. That was our target all season for him so it was very pleasing when that comes off. We will make a decision about his participation at Cheltenham closer to the time. 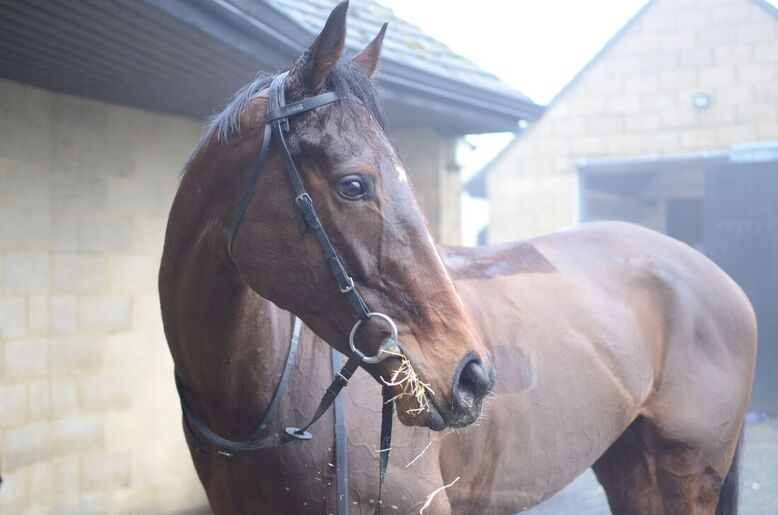 We have confirmed Lithic in the National Hunt Chase on Tuesday. On ratings he might be a little outclassed but we know he stays the trip. More rain the better for him and all going well we will head there with him. 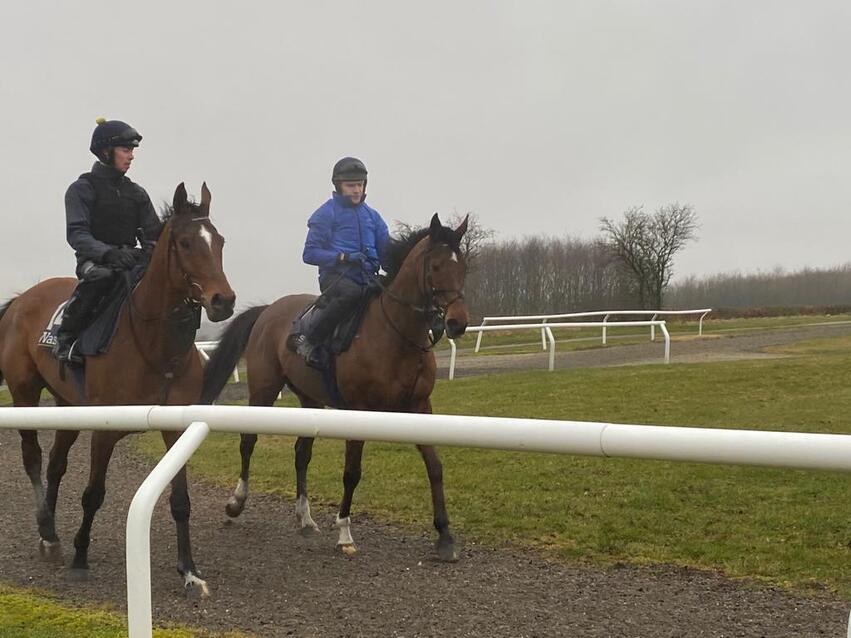 ​We have entered Dream Berry and Palmers Hill for the Coral Cup, but both would need horses to come out of the race for either to get a run. 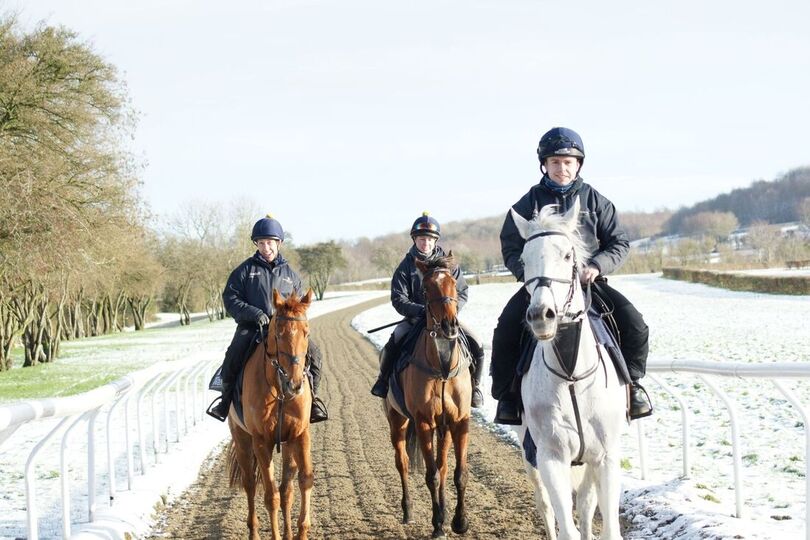 We had planned on going for the Arkle, and although things didn't really work out at Warwick last time, it told us a lot. We will now most likely go to the Grand Annual on the Wednesday with him. It’s a fast run race over 2 miles which will hopefully suit him best. He still has an entry in the Arkle if the race opens up a bit. 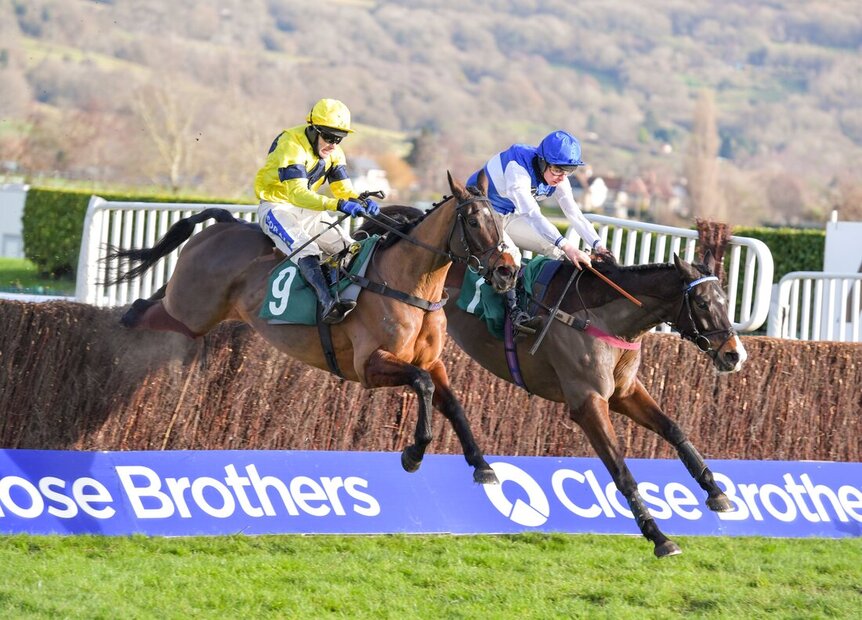 He is 2 from 2 in his bumpers this season, winning nicely at Wetherby last month. I have entered him in the Champion Bumper and deserves to take his chance all going well. 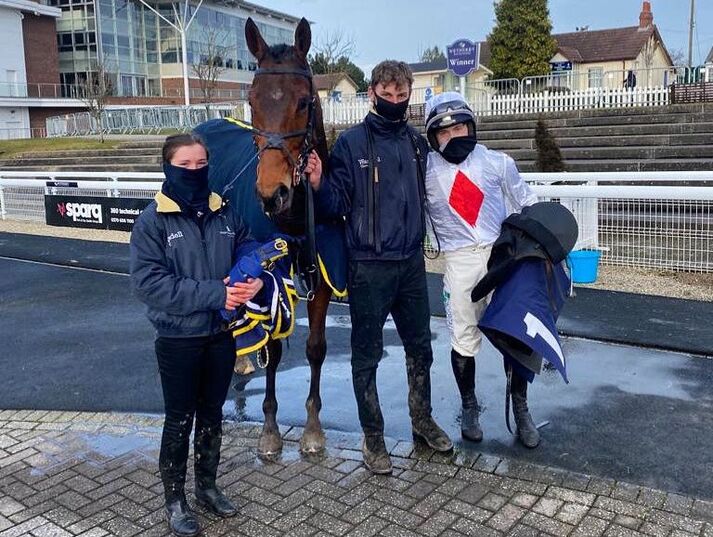 We have entered him in the Paddy Power Plate on the Thursday. Ideally he would like a little more cut in the ground and we will make a decision with him closer to the time. 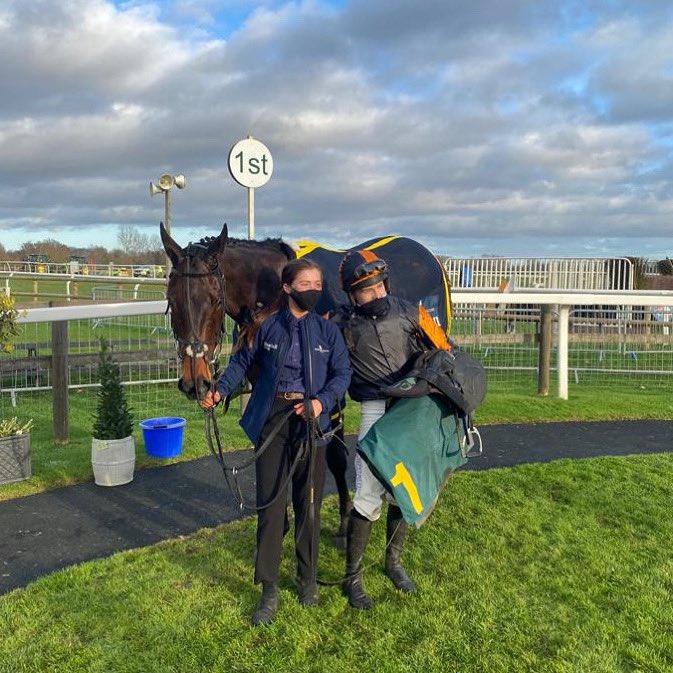 He has an entry in the Kim Muir Handicap Chase on the Thursday. The race is usually for amateur riders, however this year without them participating at Cheltenham it's open to professional and conditional jockeys. 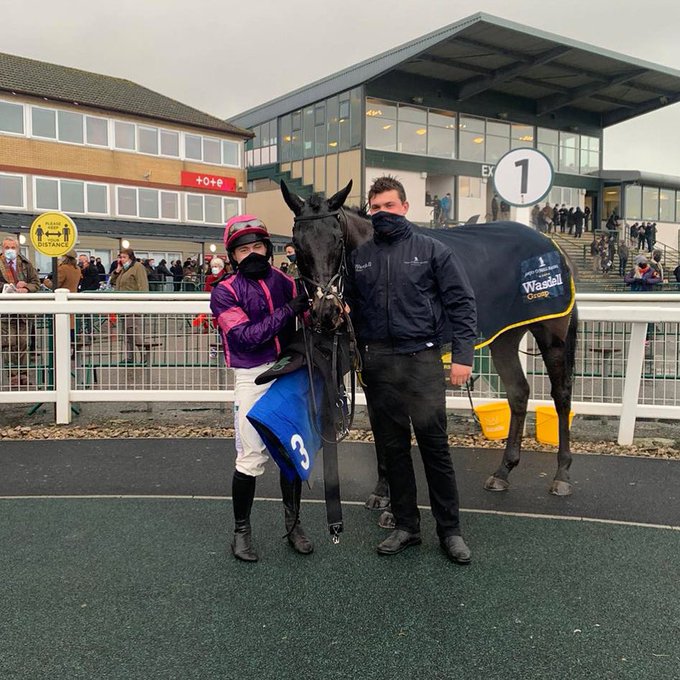 Annie Mc will run in the new Mrs Paddy Power Mares’ Chase on the Friday and deserves to take her chance. She has surprised me a little bit as I thought she would struggle a little more this season stepping up to this class, but she keeps winning and will hopefully run a big race. 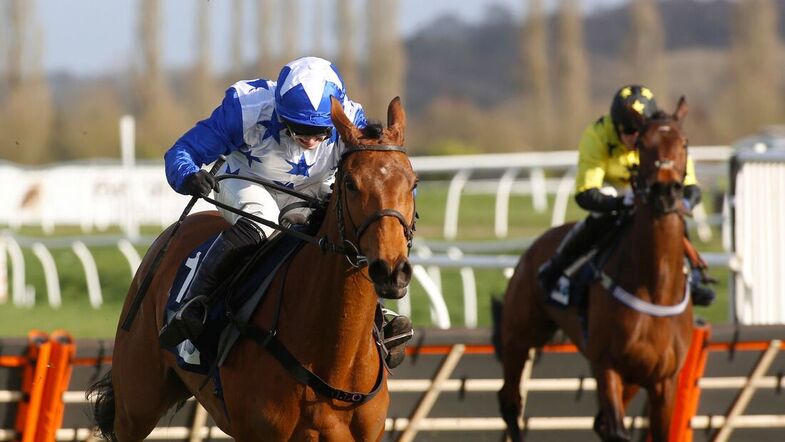 Congratulations  to Kim Zimich for being awarded our Employee of the Month for February. Kim is brilliant on difficult horses and rode Soaring Glory lots before winning the Betfair Hurdle at Newbury.

We asked her a few questions so you can get to know her a little bit more.


What's your background.
I moved here from Canada when I was 19 to ride event horses, I've competed internationally in both eventing and dressage and I am now based outside of Stow producing young horses.

How long have you been at Jonjo O'Neill Racing?
I have been working here at Jackdaws since October

What is your favourite part of the job?
I especially like riding the babies!

What is you best moment in racing so far?
Soaring Glory winning the Betfair Hurdle last month

We were delighted to welcome The Green Room Experience/Hospitality Finder to Jackdaws Castle for their Cheltenham Festival Preview.

Mark Durden-Smith hosted the event out on the lawn with Sir AP McCoy, Mike Tindall and Jonjo Jr. giving their views for the week ahead.

The film will be released on YouTube on Monday. Visit their website www.corporatehospitality.com and sign up to receive the latest news and keep an eye on our social media where we will be sharing the link.

Hospitality Finder sponsor Jonjo Jr. and are the fastest-growing independent hospitality company in the UK, providing exclusive VIP packages at leading sports and entertainment venues across the world.

They provide fantastic hospitality at major British sporting events including Wimbledon, The Six Nations, The FA Cup Final and Cheltenham Festival - and also offer VIP access to international events like the French Open tennis and golf’s US Masters.

"AND THE MARE'S BEGINNING TO GET UP!"

It is 35 years since that famous Peter O'Sullevan piece of commentary as Dawn Run and Jonjo got up to beat Wayward Lad in a pulsating finish in the 1986 Cheltenham Gold Cup.

Jonjo recollects “Halfway through the run to the last fence she seemed beat. But I let her get her own feet and she jumped it well. She’s a moody old devil, and neither me nor anyone else could get her to do something if she didn’t want to. She wasn’t absolutely knackered. She was taking a breather, saying, ‘I’m going fast enough here.’”

After Wayward Lad went two or three lengths he began to hang across in front of me towards the rails. I realised he was tired and so did she. So we both got stuck in together.”

The great mare made history by becoming the only horse to win the Champion Hurdle and the Gold Cup... a record that still stands.

If​ you receive The Jockey Club's Cheltenham Festival Magazine, you will see the lovely article written about "The Two Jonjos".

If you don't receive it, then you can see the magazine and read the article here -
https://online.flippingbook.com/view/206905553 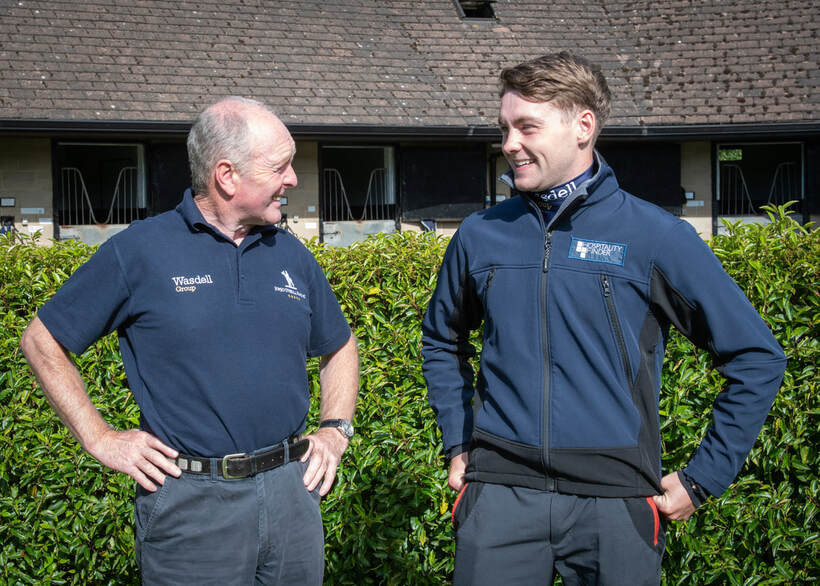 Did you know that Jonjo is one of only five people in an illustrious group  who have ridden and trained a Cheltenham Gold Cup winner?

Can you name the other four?

​You can find the answers under the images below.
The other four people to have done this are;

A huge March Happy Birthday to...