Hello to you all once again,

With Cheltenham and Aintree on the horizon, spring is not too far away. I hope, like me, you are looking forward to some warmer and less windy and snowy weather!

We were lucky that the recent storms didn't cause much damage. There were a couple of trees down around the estate, but nothing that stopped us going about our day-to-day routine.

We had a strong finish to January with 4 winners in the last couple of days, and although February has been a bit slower with less runners, we have still had some very pleasing wins which you can read more about below.

The weights for the Grand National were announced a couple of weeks ago now. We enjoyed a lovely lunch up in Liverpool, hosted by Ed Chamberlin. There was a beautiful tribute to Trevor Hemmings and a wonderful rendition from the Alder Hey Children's Choir.

We touch on it a lot more below, but I would like to give a huge mention to our Head Lad Alan Berry who has been with us for 20 years. I remember the day he arrived and he's been a great lad ever since, riding lots of winners including two at the Cheltenham Festival. Since then he has become the most loyal right hand man anyone in this game could wish for.

We will be in touch again before the Festival begins.

Jonjo Jr. produced a strong ride aboard Limetree Boy to win at Wetherby.

They tracked the leaders throughout and made good headway after 4 out. He was pushed along before going second before 2 out and then ridden to lead narrowly before the last. He kept on really well run-in to win by ¾ of a length.

We are delighted for owners Mike and Mary Gaskell. 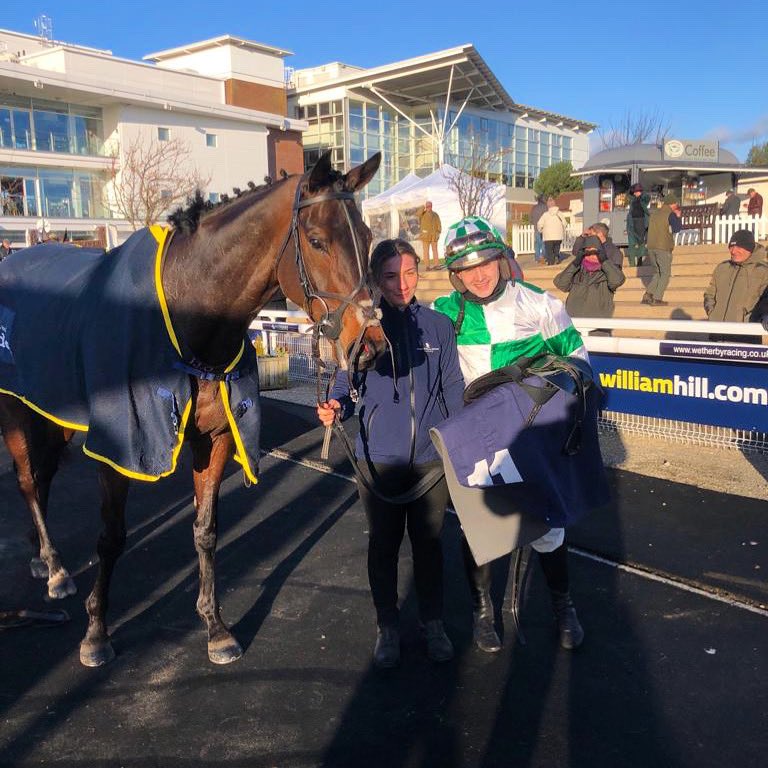 Anyharminasking kept up his impressive run of form at Sedgefield in the hands of Jonjo Jr.

The pair were always travelling nicely throughout the race and eased clear in the final 200 yards for another pleasing victory. 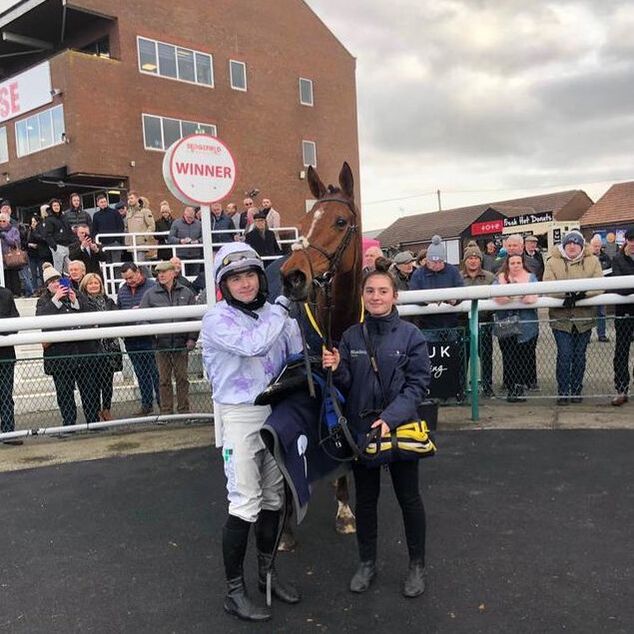 Anyharminasking with Shannon and Jonjo Jr.

A Monday Double at Hereford
JANUARY 31

​We enjoyed a fantastic day with our two runners at Hereford both winning in the hands of Jonjo O'Neill Jr.

Firstly, Orrisdale made and jumped very well to fend off his rivals in the Novices' Limited Handicap Chase. 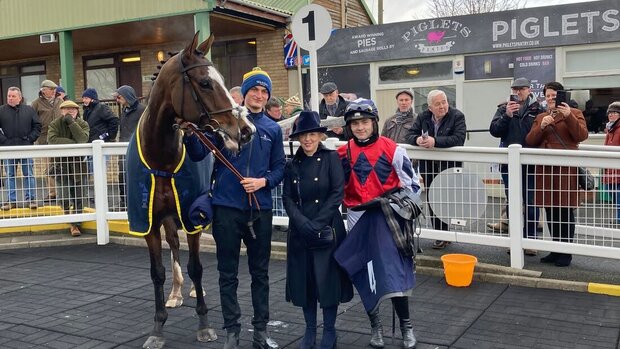 Orrisdale with Nick, Katharine and Jonjo Jr.
This was followed by a similar front-running performance by Prince Escalus in the 2-mile Handicap Chase an hour later , winning comfortably by 2¾ lengths.

We are delighted ​for Pam Carter, Diane Benussi, Helen Benussi, Tracey Reddings and The Honourable Mrs Elizabeth Wills of The As You Like It Syndicate. 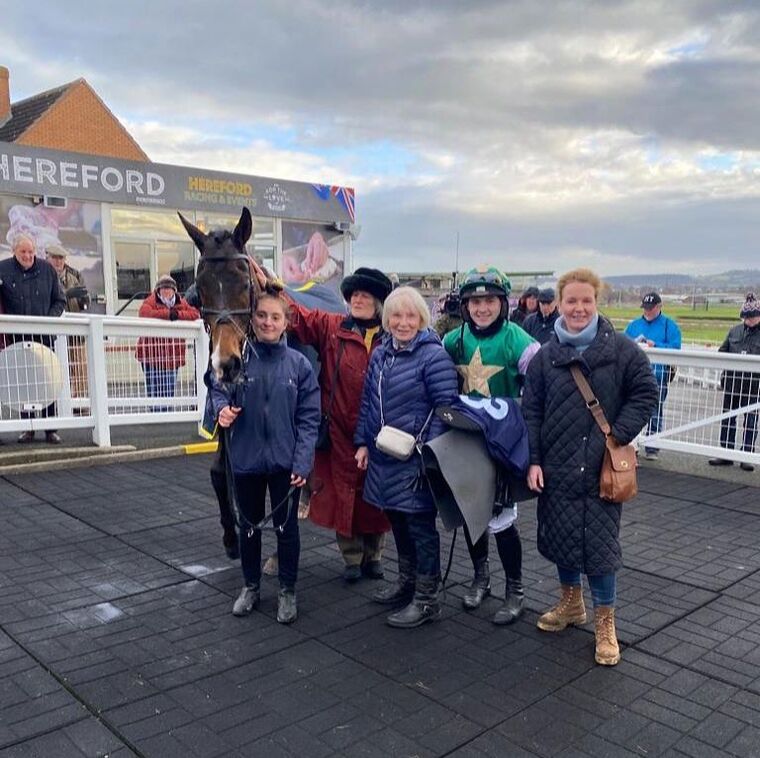 Dollar Bae put in a fine performance to win the bumper at Wincanton in the hands of Jonjo Jr.

She was held up behind the leaders and made smooth headway, before leading with 2 furlongs to go and winning well by 2 lengths.

​Huge congratulations to Max and Angela, Lisa and Paul, Eric Chapman and Gillian and John Cockcroft of The Perfect Partnership. 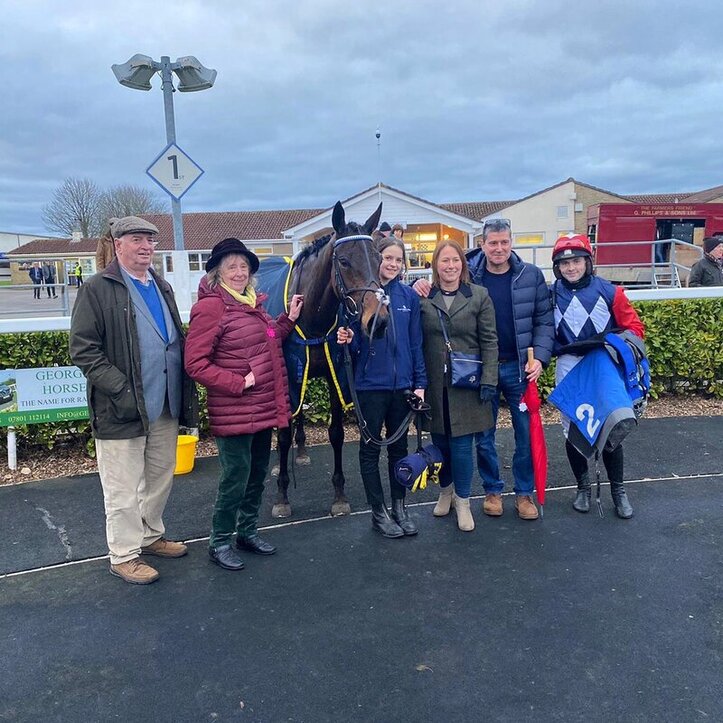 Copper Cove and Jonjo Jr. produced a confident ride in the Bumper to win at a wet and windy Exeter.

​With the leader always in their sights, they took over the lead and increased the tempo 4 furlongs out. The kept on strongly and went clear in the finish for a 2½ length victory.

Many congratulations to owner The Honourable Elizabeth Wills. 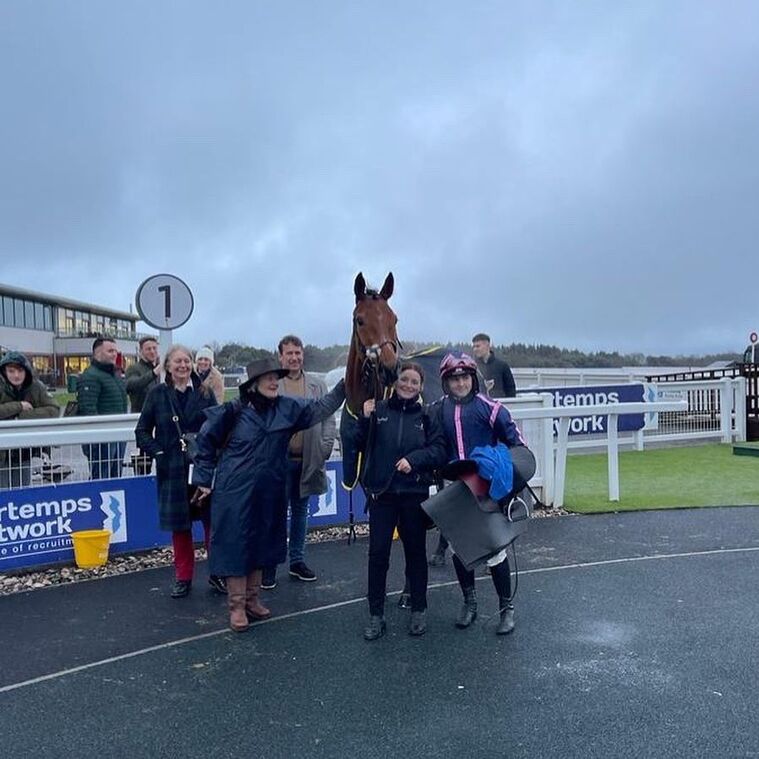 Joly Maker pounced late to win the opener at Hereford this afternoon under a brilliant ride by Jamie Brace.

We are all delighted for Jamie, riding his first winner for us. 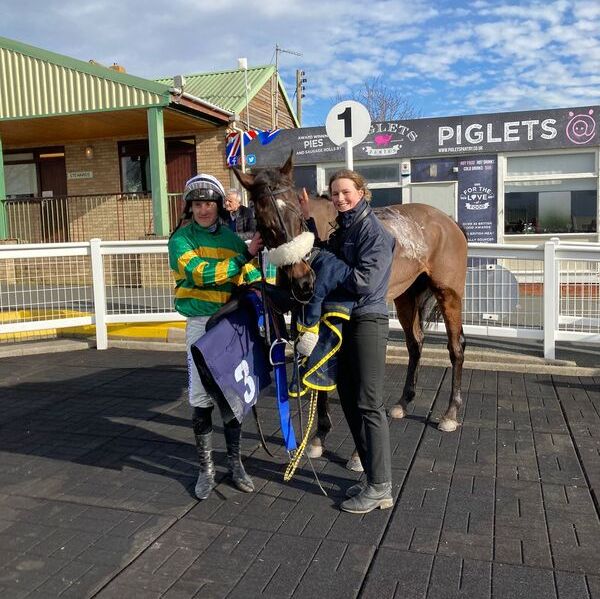 Joly Maker with Jamie and Georgia

Petit Tonnerre survived a last hurdle scare to win on his UK debut at Market Rasen in the hands of Jonjo Jr.

He travelled strongly all race and led after 2 out but lost the lead after the mistake at the last. He was thenpushed along and led again inside final 110yds and stayed on very well. 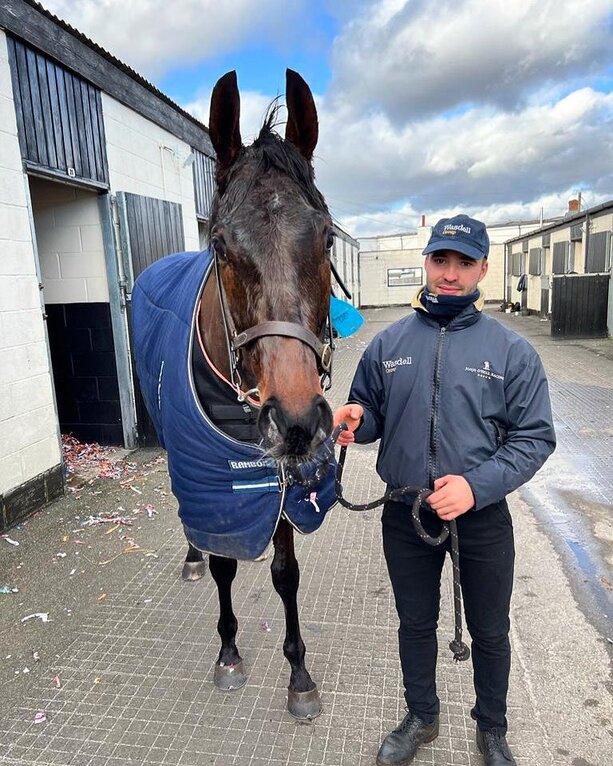 ​Judicial Law put in a defiant display to get his head in front at Ludlow in the hands of Jonjo Jr.

The pair made good headway after 4 out and soon tracked the leaders. They led briefly approaching  the last but were passed on the run-in, before rallying to finish gamely. 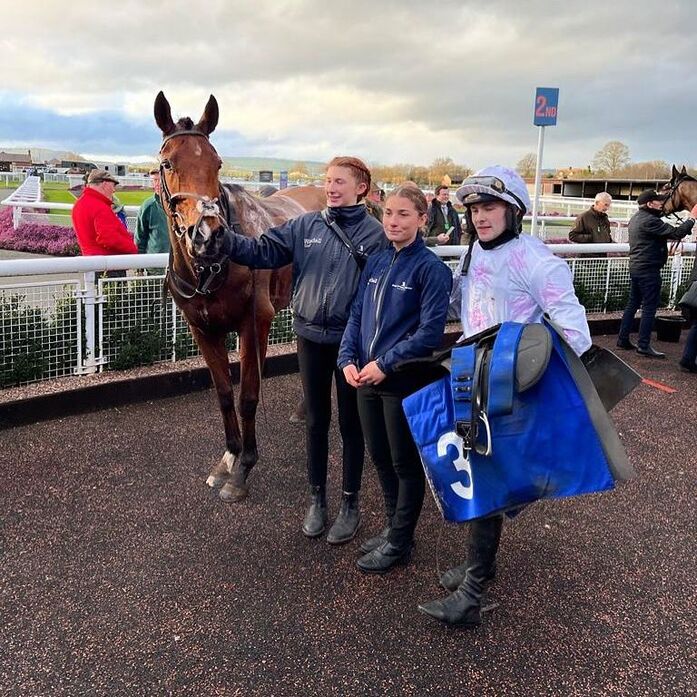 File Illico put in an impressive display when winning at Leicester in the hands of Jonjo Jr.

He was held up in last in a 3-runner race, always tracking the front pair. They pressed the leader from 3 out where the tussle for the lead commenced. After being carried left at the last, the jump was less than fluent but they kept on well, and found enough in the run-in, to win comfortably in the end by 7 lengths.

Many congratulations once again to owner The Honourable Elizabeth Wills. 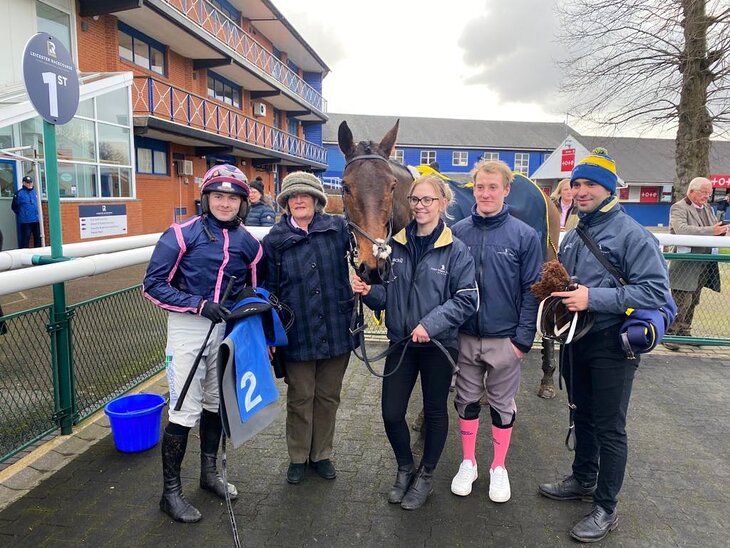 When a carpentry apprenticeship fell through in 2002 back in his native Kildare, ‘Berry’ (as he’s known) came over to Jackdaws Castle.

He is from good racing stock; his dad is former champion jockey Frank Berry who is racing manager to JP McManus and his older brother Fran was a Royal Ascot winning jockey, and with such pedigree it wasn't long before he became an amateur jockey with lots of success.

During his career, he rode sixty-four winners, including a Grade 1 bumper success at Punchestown aboard Refinement, followed by two Cheltenham Festival winners on Butler’s Cabin (2007) and Sunnyhillboy (2012).

He also won bumpers on subsequent Irish National-winner Shutthefrontdoor and Grand National winner Don’t Push It who he looked after and rode at home.

Sadly, in 2013, Berry fractured his vertebrae in a fall over in Ireland and had to retire from race-riding.

After a few months on the sidelines, he returned to Jackdaws Castle and ran our satellite yard over at Slade Barn. In 2018 he made the move over to the main yard at became Head Lad alongside Johnny Kavanagh. In 2021, he was shortlisted in the Leadership category for the Godolphin Stud & Stable Staff Awards.

Alan lives at Jackdaws Castle in the aptly named Butlers Cabin with his wife Lisa and his daughter Eva.

Congratulations to Jamie Brace for being awarded our Employee of the Month.

We were all absolutely delighted to see him ride his first winner for us at Hereford last week.

We see how hard Jamie works every day, working and schooling horses alongside our other jockeys and it's great to see some of that hard work pay off.

​Here's to many more winners!

As Jonjo mentioned above, the weights for the Grand National were revealed on February 15th.

Cloth Cap will run this weekend at either Kelso or Dancaster.

Our very own John Dina regularly posts videos of our horses swimming on TikTok to his 850,000+ followers. He has amassed an incredible 15 million likes and even more views.

This week, LadBible shared his videos, highlighting the care of the horses when swimming in our equine pool here at Jackdaws Castle.

​You can watch the video below

We had a shock a couple of weeks ago waking up to 3-4 inches of snow!

It didn't prevent us working as normal and looked very pretty once the mist had lifted! 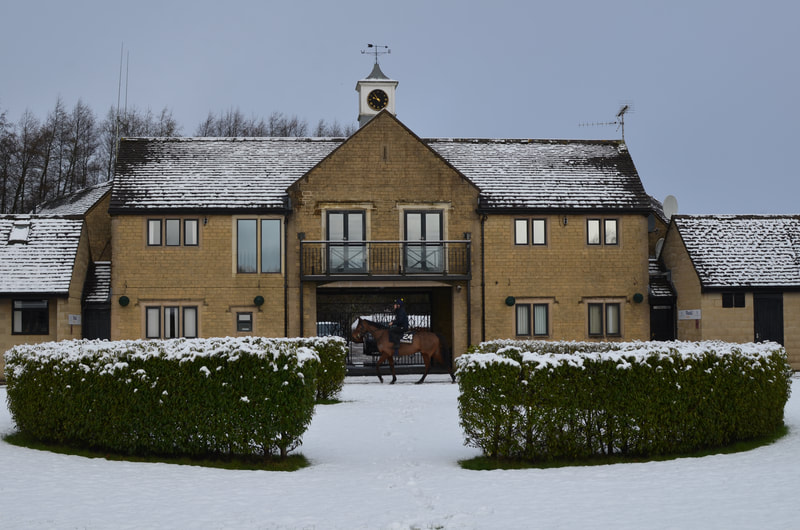 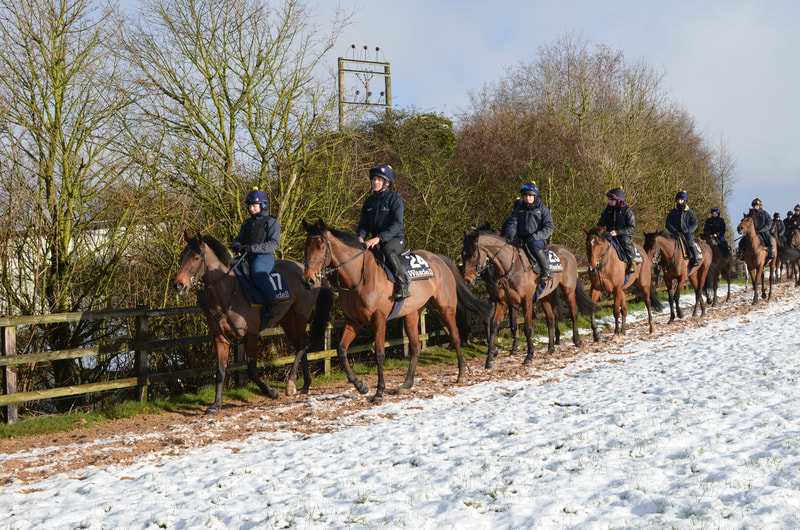 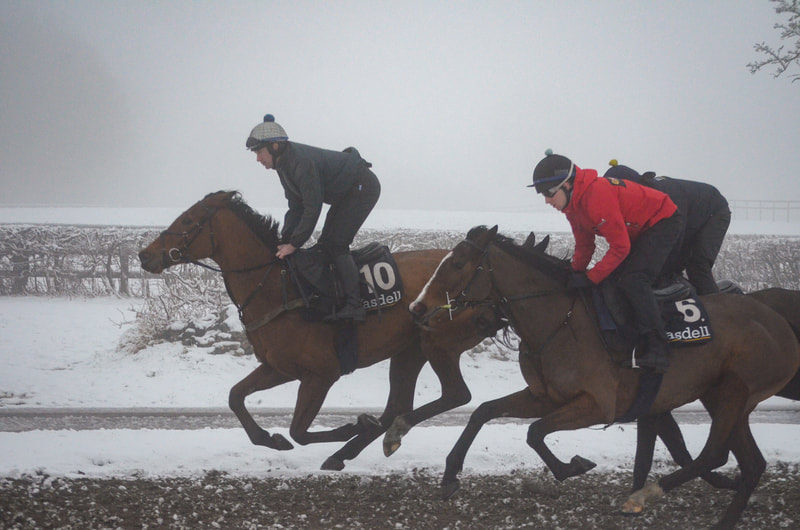 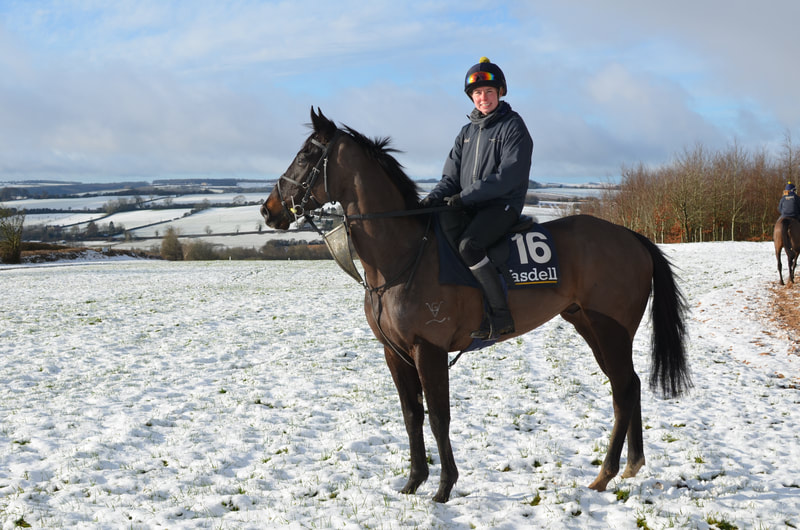 A huge Happy Birthday to...